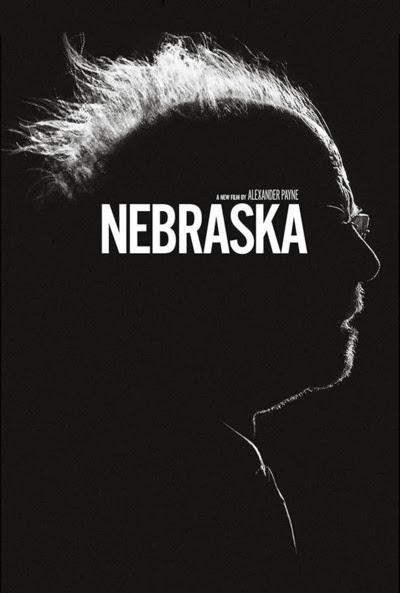 I am writing this on the morning of 3/2/14, ahead of tonight's Academy Awards ceremony. So I don't know if NEBRASKA will win in any of the multiple categories (best picture, director, actor, actress, screenplay, and cinematography) for which it has been nominated. Having seen absolutely none of the work representing its competition, I have no basis upon which to judge/predict how it will fare … other to say that, if it wins for any or all of the above, it wouldn't be a bad thing.

NEBRASKA is a small, quiet, subtle, serio-comic, ultimately sweet film. That's right, sweet. Hardly the sort of movie-going fare that I normally seek out … although, in my dotage, I have been a bit more open to such. Frankly, if not for two factors, I likely would have paid little or no attention to this one. Namely: First, since Nebraska has been my adopted home state for the past fifteen years and I've grown to love and appreciate it a great deal, anything that casts a positive light on my much-maligned cornhusker turf is likely to get my attention; Second, having been a fan of Bruce Dern ever since the days of the old "Stony Burke" TV rodeo series (and even forgiving him for brutally killing John Wayne in THE COWBOYS), I was pleased to see the ol' Dernster getting this kind of attention and praise.

The plot of NEBRASKA is simple. It tells the story of Woody Grant (Dern), a retired auto mechanic now living in Billings, Montana, who has received a Sweepstakes letter in the mail informing him that he's won a million dollars and only needs to go to Lincoln, Nebraska, to collect it. It is obvious to everybody --- everybody but Woody, that is --- that this is strictly a scam, a come-on for him to place some magazine subscriptions. Woody is old and weary, a little feeble-minded, and by-God convinced that a million dollars is waiting for him in Lincoln and he intends to go get it, even if (since he's no longer allowed to drive) he has to walk --- which he strikes out to do, every time backs are turned on him and he gets the chance. 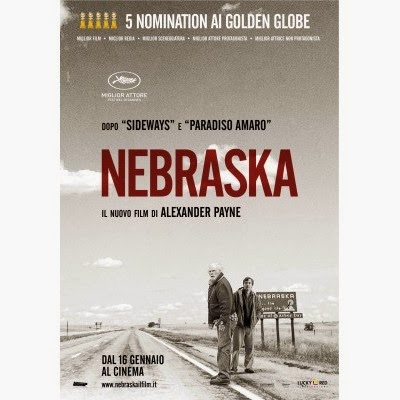 Ultimately, when David, the youngest of his two sons, agrees to take Woody to Lincoln for the sake of shutting him up by proving that the letter is a scam, the movie becomes a road trip story of sorts that allows father and son to form a tenuous bond, something lacking up until now due to Woody's long work hours and hard drinking when his sons were growing up. When the pair stop over in Woody's home town, Woody's wife and other son join them there for a rather impromptu family reunion. During this, layers of Woody's past are gradually revealed … and (subsequent to learning of Woody's "million dollars") the true, greedy colors of some of his more remote family members and old friends are revealed. In the end, Woody's immediate family --- his two sons and even his shrewish wife, who rather unexpectedly rises up as her husband's champion and turns her acid tongue to cutting down the gathering vultures by telling them, among other things, they can "all go fuck yourselves" --- find a greater strength of unity in themselves than they ever realized.
And, even though he's finally brought to face the fact that his million dollars was never meant to be, Woody's last ride through Hawthorne on the way back home is done with a final flourish of pride and dignity that was really what he was after all along.

A fine, thoughtful, and --- look out, here comes that word again, folks --- sweetly memorable film. No matter how the academy members vote, NEBRASKA is a winner in my book.
Highly recommended.

Nebraska is on my (slim) list of new films to see. Saw an interview with Dern the other night. That, along with your summary, convinces me it's a film worth seeing.

I really enjoyed this film, a great character study and observance of how we treat the aged.