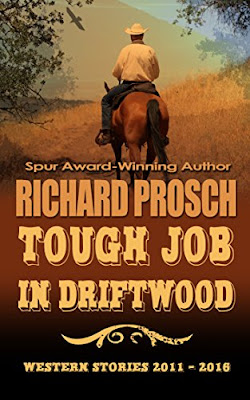 Richard Prosch writes with a distinct voice that has, in recent years, made him one of my favorite authors.

I savor not only the way he spins a yarn, but also the tales that he tells. He has written primarily of the Old West as set mostly in Nebraska and some of Wyoming. A native of Nebraska, his love for the state, the region, and the unique frontier stories he grew up listening to shine through in his writing. TOUGH JOB IN DRIFTWOOD is a collection of seventeen such stories, each one a gem in and of itself.

The cover blurb sums it up nicely:
A wrecked wagon spells trouble for a Niobrara river man; the leader of a roadhouse band needs a tough man for a dangerous job; a gambler bets on the outcome of a western showdown; a pulp fiction character haunts a woman's memory of her husband.
Old gunnies, laconic lawmen, John Coburn, Whit Branham and a host of villains bring the action, humor and irony Prosch is well known for.
Old favorites and five brand new tales firmly establish Prosch as an exciting new voice in Western fiction.

Richard’s 2016 Spur Award-winning short story “The Scalpers” is unfortunately not included in this collection. It is available on Amazon, however, as part of a short eBook anthology titled WESTERN TALES – Volume 10 from Western Trailblazers. It includes other fine stories by Philip Dunlap, Eric Bowen, and Troy Smith. It is reasonably priced and I would encourage anyone who appreciates good Western fiction to check it out also.

But then, I encourage readers who like good stories, period, to check out anything with Richard's byline featured.
You won’t be sorry.
Posted by wayne d. dundee at 8:28 PM 1 comment: 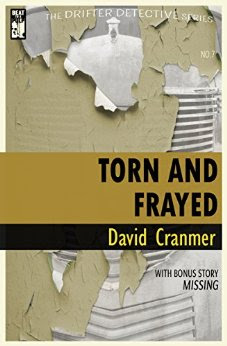 This seventh installment of the Drifter Detective series is penned by series creator David Cranmer, coming out from behind the Edward A. Grainger byline that he uses for his popular hardboiled Western stories featuring Cash Laramie, the Outlaw Marshal.

In addition to his fine writing skills, Mr. Cranmer, as most everybody knows, is the head honcho behind the Beat To A Pulp webzine and books --- a publishing concern that has provided an outlet to a wide range of talented writers telling a wide range of entertaining tales.

The Cash Laramie tales are at the core of it all (although the BTAP features are branching wider and wider all the time) and the Drifter Detective series – featuring one Jack Laramie, by name - is a direct extension of that; Jack, you see, is the grandson of Cash. As a mobile PI operating out of a DeSoto-drawn horse trailer in post-WWII Texas, he seeks to dish out the same kind of justice his grandfather did in the 1880s Old West.
It’s a creative concept done well throughout the series to date. A variety of fresh settings and problems handled with the distinct flair of a slightly modernized “town tamer”. When Jack Laramie gets involved, things are gonna get shaken up and they might not be resolved to everybody’s satisfaction, but they’re likely to be better than they were.
TORN AND FRAYED is a somewhat moodier, more nourish entry than much of what has come before - with some interesting Ross Macdonald/Lew Archer touches. The writing and the twists make it all go down as smooth as a belt of good bourbon at the close of a hard day.
Strongly recommended.
Posted by wayne d. dundee at 9:04 PM No comments: