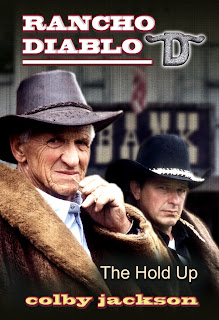 For anyone who hasn't yet discovered the terrific RANCHO DIABLO series --- or perhaps hasn't kept up with each entry --- here is an excellent chance to jump in and discover (or re-discover) what all the shouting is about.
Over this coming weekend (starting tomorrow, Saturday 4/27 thru Sunday 4/28) one of the recent entries in the series is being offered for FREE!
You don't want to miss out.
Here's author Mel Odom to tell you more:

This is the seventh book of the RANCHO DIABLO western series I’m doing with my buddies Bill Crider and James Reasoner under the “house” name Colby Jackson.  We’ve done pretty well with it, and we’re proud of what we’ve created.  The books are PG-13 because of the violence.  There’s no coarse language, no “adult” situations, just an old-fashioned, quick reading Western.  Hope you enjoy if this suits your taste.

SYNOPSIS:  When Randy Post, a young cowboy riding for the Rancho Diablo brand, gets accused of murdering a saloon girl, Sam Blaylock saddles up to get to the bottom of the matter before they fit him for a hangman's noose. Sam doesn't know that the murder has set off a chain of events that will end up with him swapping lead with a murderous gang of robbers eyeing one of the banks in Shooter's Cross.

In the past, Marshal Everett Tolliver and Sam Blaylock haven't seen exactly eye-to-eye on things involving the ranch hands. Tolliver intends to hold the peace in town no matter what the cost. But he's going to need help if he's going to find out who murdered Jessie Holden in cold blood.

Even after they've set their differences aside for the time being, Sam and Tolliver still have to put their lives at risk to hold the line in Shooter's Cross in a gundown on Main Street that will become a legend.

Thanks for your continuing interest and support!
Posted by wayne d. dundee at 4:58 PM No comments:

I'm vacating the chair today and turning the desk over to John R. Lindermuth.
You've seen John's name here before. I did an interview with him way back and when and I have also mentioned/reviewed a number of his books here. He is perhaps best known for his contemporary "Sticks" Hetrick mysteries, but he has done several other novels and stories, often with an historical setting. This is fitting inasmuch as, since his retirement from newspaper editing, John has served as librarian for his local historical society and is vastly knowledgeable about the coal-mining region of central Pennsylvania where he lives and writes.

John's latest novel is SOONER THAN GOLD, a turn-of-the-century mystery set in this area. It is the second of his books to feature Sylvester Tilghman, sheriff of fictional Araphot, PA. As usual, it is well written, richly detailed in period history, and presents a cast of colorful characters caught up in a finally crafted plot. You won't want to miss it.
And now here's John:

Okay, I hear some muttering. So what? And, who cares? Some would have you believe the Internet has made the public library irrelevant. I beg to differ.

My hometown didn’t have a library until 1953. Fortunately, my Dad had a good supply of books at home and the several independent bookstores which existed in the town at the time got a good share of my spending money over the years. When it did arrive, the library expanded the range of books and information available to me and contributed to my desire to write.

Libraries are another of those good ideas we owe to the Greeks, and they may have borrowed the idea from the Chinese.

Benjamin Franklin was responsible for the opening of the first in my home state of Pennsylvania in 1731—one of his best ideas, in my opinion. The Quebec Library, the first publicly funded in Canada, opened in 1779. But Mexico pre-dates both in claiming the first public library in the New World. Don Juan de Palafox y Mendoza, bishop of Puebla and Viceroy of New Spain, opened the Palafoxian library in 1646 when he expelled the Jesuits and confiscated their books. This library still exists and holds some of the oldest books in North and South America.

Now I appreciate the Internet and agree it’s a damned good source of information. But, as good as it is, it’s just a glorified robot and lacks the warmth and personality to be found in your average library. Aside from books and other resources (including access to the Internet), the library has some other assets that make it attractive to us scribblers.

For example, I defy you to spend an hour observing other patrons and not come away with a character sketch or a story idea or two.

Or, suppose you’re devoid of said idea germs, here’s a little trick I’ve found useful. Go down to the library and avoid the new book shelves and your usual haunts. Instead, head into one of those stacks you’ve never or rarely entered. Pluck a book (any book) off the nearest shelf, open to a random page and read a paragraph or two. If that doesn’t work, try another. Soon, stimulated by what you’ve read, your mind will start producing seeds for you to nurture. You’ll be surprised. Guarantee it.

I’m eternally grateful for the library and those who maintain it. I believe the world would be a bleaker place without the public library. Truthfully I’ve probably spent more indoor time in libraries and book shops than anywhere else. And, if I have to be indoors, I can think of few places I’d rather be. 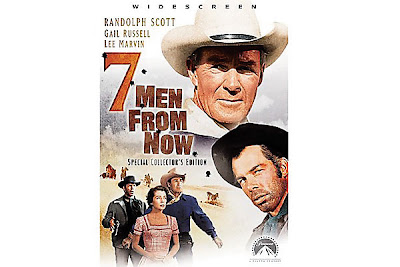 Kind of embarrassed to admit it, but I finally got around to watching this classic Western for the first time only a few nights ago. I'd been hearing about it and meaning to check it out for years, but somehow never got around to it. Then I reached that strange point that sometimes happens with me where—after hearing so much hype and praise—I become reluctant to take a look for myself because nothing can be that good and I'll just come away disappointed.
Well, that surely wasn't the case this time. I won't say it was worth the wait because now I could kick myself for not getting around to it a lot sooner. But it did not disappoint.

This was the first collaboration between star Randolph Scott and director Budd Boetticher, with a script by Burt Kennedy. Scott-Boetticher would go on to make a total of seven films together before the close of the decade, five of them scripted by Kennedy. They represent some of the leanest, toughest, finest Westerns to be found.
The best of the lot, in my humble opinion, was RIDE LONESOME. But SEVEN MEN FROM NOW comes in a close second, and makes for one helluva fine kick-off.
This film was the first produced under the banner of John Wayne's Batjac Productions (growing out of Wayne-Fellows) and was originally slated for Duke to star in. Wayne would often comment in later years how much he regretted not getting the chance to be in it. But, at the time, a scheduling conflict with a little thing called THE SEARCHERS got in the way and Duke had to call on his old pal to fill in. As a straight-up trade, however, I don't think anybody would consider the role of Ben Stride in SEVEN MEN for Ethan Edwards in THE SEARCHERS a bad deal. And, in the final analysis, Scott makes Stride all his own and it is one of the gems of his career. 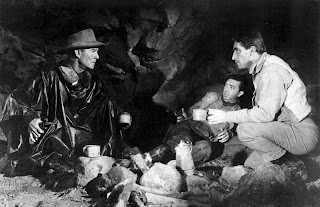 The plot of SEVEN MEN FROM NOW is your basic trackdown/revenge Western, but with some nifty twists and plenty of sub-layering and character depth. Stride is the former marshal of Silver Springs who, after losing the last election, was too proud to take a deputy's job. To make ends meet financially, his wife went to work at the local Wells Fargo freight office and was there the day seven men robbed the place and killed her in the process. Haunted by her death and driven by feeling guilty over her having to take a job because he was too proud to work at what was available for him, Stride goes after them.
The gang has split up with plans to re-group in the town of Flora Vista. One by one, Stride tracks them down, cutting down three of the seven before they have the chance to re-assemble. And then he begins to close in on the rest.

Stoic, determined, unyielding—Scott has never been better.
Lee Marvin, playing a dangerous lowlife who wasn't part of the original robber gang but is nevertheless out to get his hands on the gold they stole, chews up the scenery like an out-of-control bulldozer and gives a memorable portrayal somewhere between Liberty Valance and Tully Crow (from THE COMMANCHEROS).
Sultry-eyed Gail Russell (at the time near the end of her career and her life, ravaged by the drugs and alcohol she turned to in order to try and overcome near-crippling stage fright) nevertheless delivers a smoldering performance as the wife of a hapless, inept man struggling to make it to California so the couple can start a new life there. Since Flora Vista is one of their intended stops on the way, Stride ends up traveling with them for a ways and an undercurrent of attraction between him and Russell's character quickly develops.

I could go on and on, but hopefully you've got the idea by now.
If you haven't seen this fine film in a while, you'll for sure want to have another look.
If, like me, you for some reason have never viewed it—don't waste any more time!
Highly recommended as a top-notch Western and a worthwhile film in any genre.
Posted by wayne d. dundee at 7:51 AM 2 comments: