This new and unique organization has come to the fore in the ongoing fight against the predators who prey upon our young and vulnerable. The Mission Statement below --- from none other than Andrew Vachss, who has been on the front line of this battle for many years --- explains things better than I can. After you've read through it, please click on the LDICP link to learn still more and to hopefully support them any way you can.
Link: http://www.LDICP.org 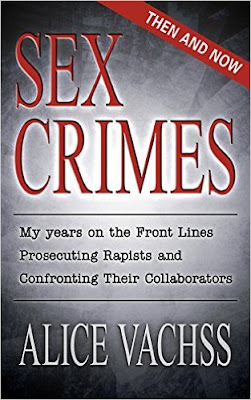 In an updated volume that features the first SEX CRIMES book published over twenty years ago --- the “then” from this current title --- plus updates and several thousand words of all new material --- the “now” --- this is a fascinating, disturbing, eye-opening book.
If you think you know how the criminal justice system works for prosecuting rape and other sexual abuse crimes from news reports and TV shows … you don’t. This important work by Alice Vachss will set you straight. You won’t like what you learn. It will make you angry, as it should. It also should make you pay closer attention in your area and do everything you can to demand more from your local authorities and prosecutors. The corruption and deal-making that goes on in political systems – large or small – ought not come as any surprise. But when it comes at the expense of justice for those who’ve already suffered unspeakable crimes --- as documented here by case file accounts --- it is appalling and disgusting.
Unfortunately, too few communities and/or cities have anyone like Alice Vachss at work for them.

From the cover blurb:
In an even better than the original spellbinding sequel, Sex Crimes NOW finds Alice Vachss returning to prosecution – this time in a remote rural county. Still the same, she insists to a jury: “I don’t have to prove motive. The motive for rape is rape,” and battles a system hell-bent on freeing a monster. 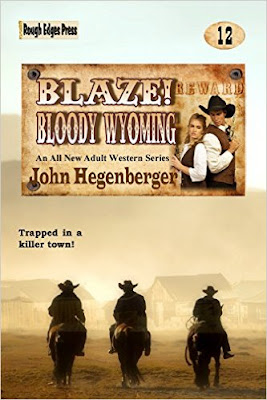 Prolific author John Hegenberger, known prior to this for entertaining mystery thrillers and science fiction, has now entered into the Western genre and his first title is a corker.

This twelfth title in the exciting BLAZE! Adult Western series from creator Stephen Mertz and Rough Edges Press, BLOODY WYOMING is a full-tilt action yarn that throws the husband-wife gunslinger team of Kate and J.D. Blaze into one of their most harrowing adventures.

The cover blurb reads as follows:
All J.D. Blaze wanted to do was celebrate his wife Kate’s birthday, but when you’re the Old West’s only pair of husband-and-wife gunfighters, trouble is never far away. A savage attack and a dangerous injury not only threaten Kate Blaze’s life, she also finds herself a captive of twisted killers and unsure of her own identity. But J.D. will battle with his wits, a pair of rock-hard fists, and a blazing .45 to find Kate and free her before it’s too late!

Without giving too much much away, that sums it up pretty good.
If you like your Westerns fast-paced and chock full of gun-blazing action, you don’t want to miss this one!
Posted by wayne d. dundee at 3:36 PM No comments: