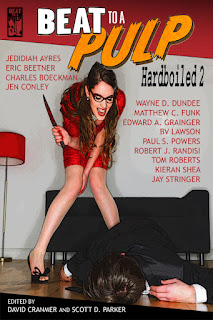 #2 once again features thirteen tough tales of mayhem, murder, and various dastardly deeds. The contributors cover a wide range of authors like Charles Boeckman and Paul S. Powers, from the  "golden age" of pulps, to some of today's most exciting newer talent—and even a couple of in-betweeners, including yours truly with a story of one of Joe Hannibal's last adventures while still operating out of Illinois, before relocating to Nebraska where he currently still finds plenty of trouble.
Co-editor (along with Scott D. Parker) David Cranmer does double-duty, under his Edward A. Grainger pseudonym, with an imaginative Cash Laramie story set in 1911. An aging Cash, somewhat past his prime as a deputy U.S. marshal in 1800s Wyoming, shows he still has the vinegar and toughness to come out on top when he tangles with some bad hombres on the Mississippi River.

Thirteen hardboiled gems available now for Kindle and Nook at the bargain price of $1.49. Soon also to be available in a paperback print format. A lineup I'm proud to be part of, and one I'm confident you will enjoy.
Recommend you give it a try.
﻿
Posted by wayne d. dundee at 2:18 PM No comments: 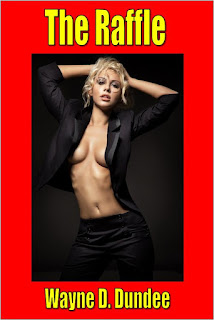 Here is a tight, nasty little tale just released by my own Bil-Em-Ri Media.

It's a Kindle Short that can be yours for just 99-cents ... Come on, guys, the cover alone oughta be worth that much. And, if I do say so myself, the story ain't bad either (except for a couple of schemers who happen to be in the story, that is).

In the next couple of weeks, I will be releasing two more Kindle Shorts that I think/hope you will enjoy as well.
And by (or maybe a bit before) early March, my new Joe Hannibal novel --- BLADE OF THE TIGER --- will be out.

Lots brewing here behind Dundee's desk, for the first half of this year and beyond. I'll keep you posted as things proceed.
But for the time being, I hope you give THE RAFFLE a try. I don't think you'll regret it.
Posted by wayne d. dundee at 6:53 AM 1 comment: 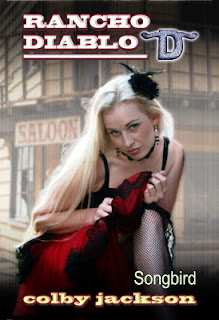 This time around, it's Bill Crider behind the byline and he spins another winner, taking already-established elements of the series and building on them with an imaginative, entertaining tale filled with humor, menace, lots of colorful characters, and plenty of action.

SONGBIRD is a top-notch Western and an excellent addition to an already outstanding series. Don't miss this, or any of the other Rancho Diablo titles—you'll be cheating yourself if you do.
Posted by wayne d. dundee at 6:36 AM No comments:

Another Look: Sergio Leone's ONCE UPON A TIME IN THE WEST 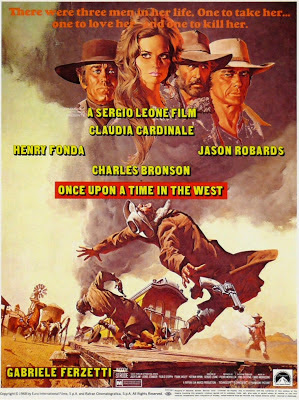 I sat down the other night and, for the first time in three or four years, watched the 165-minute version of this sprawling epic all the way through. That probably made the tenth or eleventh time I've seen it, in various versions; not to mention the dozen or so other times I've paused while channel surfing (back when it played more frequently on cable) and watched some portion of it.
It never lets me down. If anything, like a fine wine, it gets better with age. (Okay, we all know I don't know diddly about wine, fine or otherwise; it all tastes like vinegar to me. So a more honest personal perspective would be to say it's like a big pot of leftover chili that gets better each time you warm it up.)
The point is: This is a fine movie that is to be savored and enjoyed again and again. Each time, you see a deft little touch or detail that you either missed or forgot from the times before. If Leone had never made another film, he would be long remembered for this one. (Frankly, I don't care much for any of his other work anyway, not even the vaunted "Man With No Name" trilogy.)
Two things in particular struck me this time around. (Hate to admit I'm a little slow on the uptake but, in reading some other articles/reviews to prepare for this piece, I found others had hit on these long before me. But nuts to it, I made these observations as notes while I was watching the film so I'm going to go with them.)

First, there is the spare use of dialogue. Leone conveys so much with his music and the eyes and facial expressions on his enormous close-ups that words are not necessary. The longest sequence of dialogue (which almost seems rambling by comparison) is Henry Fonda talking to Jill (Claudia Cardinale) while they are making love in a cave up in the Navajo Cliffs.

Secondly, there is the spare use of actual violence. What's that, you say? This is a violent film filled with nasty, violent people. How can anyone say there is spare use of violence?
Well, uh, because there is.
When you stop and think about it, there are lots of scenes that end in violence. But most of the time in these scenes is taken up with the lead-up to the explosion of violence (again, the all-important music, the narrow-eyed and grim-mouthed close-ups). When the violence comes, it is over very quickly and not especially graphic. Once again, the only prolonged scene of violence is when Harmonica (Charles Bronson) slaps around the operator of a laundry house to get information on where to find Frank (Henry Fonda). Come to think of it, that same fellow meets his maker a little while later in another somewhat prolonged scene of violence when Frank (after asking him, "How can anybody trust a man who wears a belt and suspenders?") proceeds to kill him by shooting him in the chest, snapping both of his suspender straps, and then finishing him with a gut shot that blows apart his belt at the buckle. 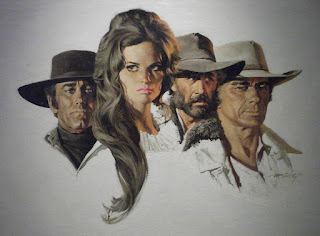 All and all, the plot and the characters are pretty simple. The actors are top notch but, except for Hank Fonda playing against type as a really nasty villain, they aren't asked to stretch themselves much. This is truly a director's film. The music, the set-up of the scenes, the scope and grandeur of the outdoor shots, the pacing … it has Leone's stamp all over it.

Oh, and did I mention it has Claudia Cardinale, looking smolderingly luscious in every shot she's in?

Any way you cut it, the final result is a great Western and a really fine film by any measure.
If you haven't seen it in a while—or ever, for crying out loud—give yourself a treat and have another look. If you rent it or buy the DVD, try to get the director's cut, full-length version with added features. The scenes that were cut for general release when the movie first played here in the states aren't necessarily crucial to the story, but they add a depth and texture to Leone's overall work that make them worthwhile.
Strongly recommended.
Posted by wayne d. dundee at 6:01 AM 3 comments: 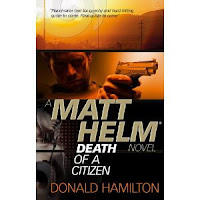 Titan Books' re-issuance of the popular Matt Helm series by Donald Hamilton finally kicks off next week with the first two titles in the series—DEATH OF A CITIZEN, and THE WRECKING CREW. The covers look slick and snazzy, complete with a blurb from Tom Clancy (apparently to give the whole undertaking a contemporary boost) so it appears Titan is putting a serious effort behind this program.

For my money, a Matt Helm book in even the drabbest cover (and, let's face it, some of those Helm covers from the 60s—especially compared to the Gold Medal covers being done for MacDonald, and Signet's Carter Browns—sure didn't knock anybody's socks off) is still cause for celebration. Since the Helm series occupies an honored space on my bookshelf, I have read all the titles, some more than once. So this new kick-off by Titan Books is cause for excitement to me only in the sense that I hope it will introduce the best operative from the spy craze days (and, yeah, that means you too, Jimmy Bond) to readers who haven't yet discovered him. Helm, simply put, was the real deal: Tough, remorseless, a pro all the way. And Donald Hamilton's writing skill can stand shoulder to shoulder with any author in any genre.
The Big Wish for me is that these Titan re-issues prove popular enough to culminate in the publication of Hamilton's final, as-yet-never-published Helm—THE DOMINATORS. Now that would be cause for celebration! 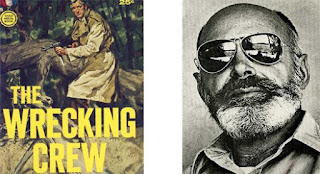 On a personal note: I had the honor to carry on a brief correspondence with Mr. Hamilton in the late 1980s. I think we exchanged two letters each. On the occasion of my first published Joe Hannibal novel, THE BURNING SEASON, I felt emboldened enough to send a copy to Mr. Hamilton (don't remember how I got his address) along with a basic fan letter telling him how much I enjoyed his work. He responded, thanking me and wishing me well with my own efforts. Subsequently, I got a second letter from him that arrived shortly after his wife had passed away. I remember the line in which he informed of this: "Things are less than well around here as I have just lost my wife of 48 years … "
I was struck by the stoicism of the words—Things are less than well around here—and from then on I always knew that the toughness at Matt Helm's core was more than just the fictional touch of an author.
His words continue to resonate with me on an even deeper level since the loss of my own wife. February 4 will mark the fifth anniversary of her passing.
Things are less than well around here ...
Yeah, Mr. Hamilton, I sure know what you mean.
But I can always count on old friends like Matt Helm --- not to fill the void, but at least to help fill some of the empty hours.
Posted by wayne d. dundee at 9:49 PM No comments: