Another Look: IT! THE TERROR FROM BEYOND SPACE (1958 movie) 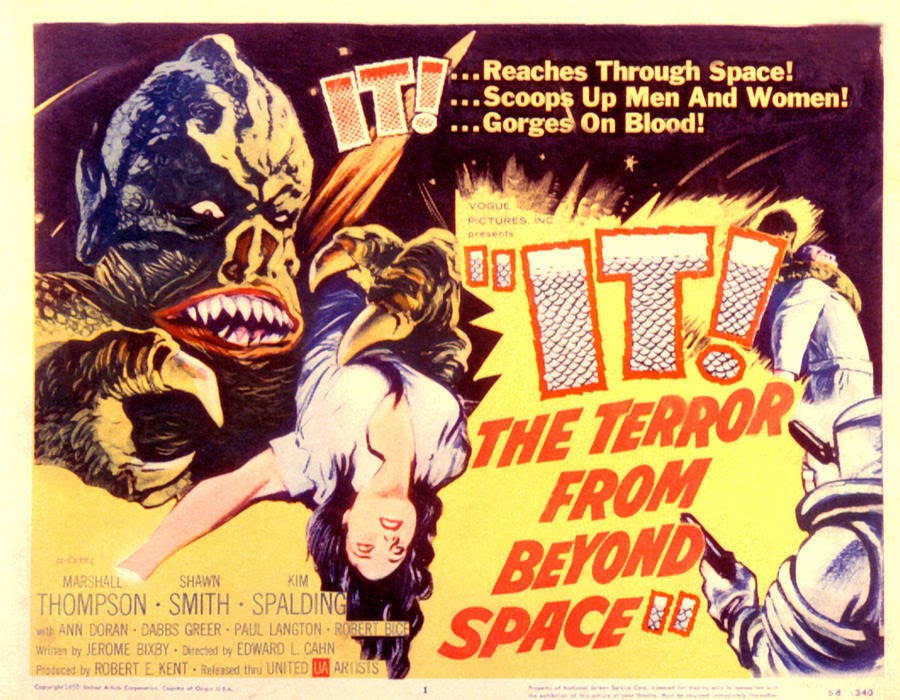 I'm sure I wasn't the first viewer of 1979's ALIEN to notice the plot similarities between that big budget mega-hit and those of the low budget sci-fi/horror gem that is the title of this post … but in my particular circle of friends at the time ALIEN came out, I surely was. This was largely due, of course, to the fact that no one else I knew had ever seen or even heard of IT! THE TERROR FROM BEYOND SPACE (and, let's face it, that's hardly a title likely to slip one's mind once encountered).
What was more, I not only had seen and remembered IT!, I actually recalled it rather fondly --- quite ahead of and apart from ALIEN. Oh sure, the acting was mostly wooden (except for veteran Marshall Thompson, who was really pretty decent, especially in the early parts of the film where he plays a stunned, desperate Space Command officer bluntly accused of murdering his whole crew).
And the special effects were nothing very special, not even for a grade Z movie of that era. But hey, it did have Ray "Crash" Corrigan playing the monster. (For the uninitiated, Crash Corrigan was a popular B-Western actor, best known for his recurring role as Tuscon Smith in the Three Mesquiteers series cranked out by Republic thrugh the late 30s and into the early 40s. The concept was a play on words "borrowed" from Alexander Dumas's classic Three Musketeers novel. There were 51 of these films in all, with a pre-STAGECOACH John Wayne playing another recurring character, Stony Brooke, in eight of them.) In addition to his work in Westerns, Corrigan created his own "gorilla suit" and utilized it playing an ape or gorilla in several films such as APE, WHITE PONGO, UNKNOWN ISLAND, and in numerous Tarzan and Jungle Jim features. 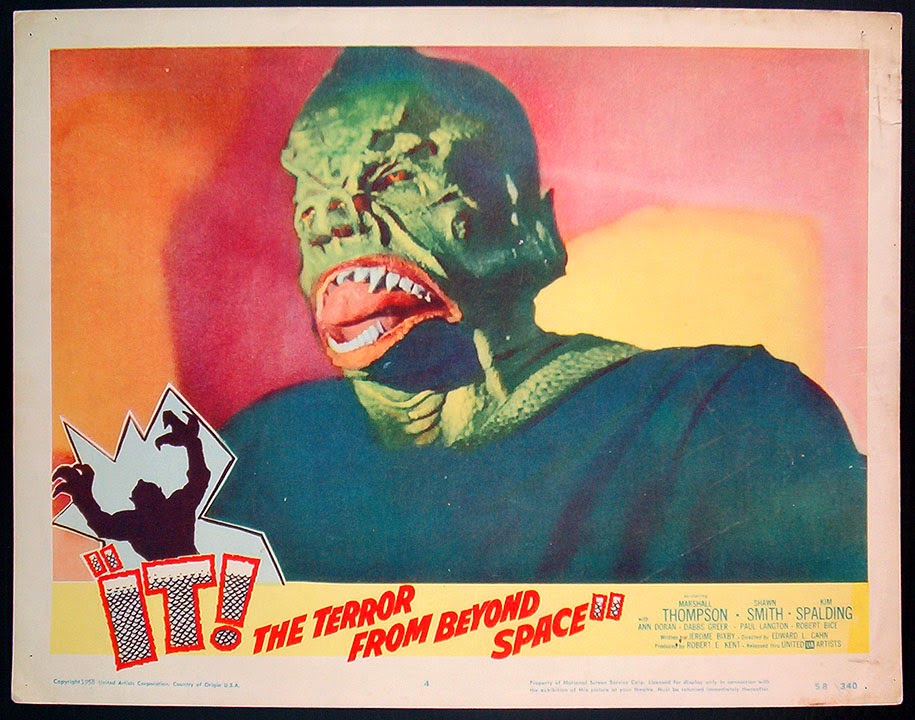 The IT! monster was his final appearance as an ape-like creature. Noteworthy about this is the fact that designer for this monster "suit" was not Corrigan himself and, in fact, Crash could not be present for a proper fitting. Therefore, when filming was ready to start, the head of the monster was too large and Corrigan's rather prominent chin protruded part way out its mouth. The fix? Corrigan's chin was painted bright red (even though the movie was shot in black and white, they wanted the right color effect) and the impression was given that it was the monster's tongue.

As for the plot of IT!, it is pretty straightforward and basic and makes for a nice, tight bit of suspense, with "monster" overtones. A spaceship journeys to Mars on a mission to bring back all surviving members of a previous expedition that crash-landed there. Trouble is: There is only one surviving member of the earlier crew. He is the commander (Thompson) and he is being returned to Earth to undergo a Court Marshal for murdering the others for the sake of claiming all of their provisions in order to increase his odds of survival until a rescue arrives.
Just as the rescue ship gets ready to blast off for its return home, an air lock is discovered to have been left open. It is promptly sealed and the ship departs the Red Planet.
Before long, with the return trip underway, a crew member disappears. Then another. It is soon realized that the open air lock allowed a visitor to board before take-off … and now that visitor is proving to be a prowling, very powerful creature who kills and then drinks the blood of its victims. (The working title of the film was IT! THE VAMPIRE FROM BEYOND SPACE.)
The balance of the movie is taken up with efforts by the surviving crew to hold off the ever more aggressive and savage attacks from the monster, while at the same time trying to find a way to kill it. In the process, everyone comes to realize that it was this monster
---  not Thompson --- who killed the previous crew on Mars.
When the monster is finally defeated and the spaceship makes it back to Earth, Thompson receives a full pardon.

While there is no acidic blood or chest-burster here, I trust you can still see the similarities between IT! and ALIEN. No direct steals, but certainly some influences. "I didn't steal ALIEN from anybody," script writer Dan O'Bannon is often quoted as saying, "I stole it from everybody!"

There's no denying that ALIEN is superior to IT! THE  TERROR FROM BEYOND SPACE in every way. But I still maintain a special fondness for the latter. If you grew up on schlocky, Roger Corman-like drive-in movie fare like I did (the ones you actually watched when the car windows weren't too fogged-up to see the screen), then you know that in the midst of the schlock there were a handful of real gems. In my humble opinion, this was one of 'em. If you've never seen it, keep an eye peeled. If you've already had the pleasure … well, then I'm betting you agree with me. If you get a chance to catch it again on cable or DVD, I think you'll find that it still holds up pretty good.
Posted by wayne d. dundee at 10:26 AM

I saw this, and way too many others of its kind, back in the '50s They were first-run movies at the indoor theater there in those days.

I did too, in Wichita Falls. I still have an old tape of the movie, but I haven't watched it some years.

IIRC, A. E. Van Vogt claimed that both movies were swiped from his novel "Voyage of the Space Beagle," which was probably a compilation of his short stories "Black Destroyer" and "Discord in Scarlet."