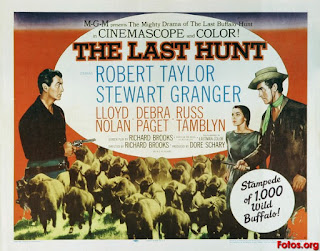 This surprisingly gritty, mature movie for its time, came out one year after director Richard Brooks’ break-out film, BLACKBOARD JUNGLE. Like most of his work after that point, it was ambitious beyond providing mere entertainment. In this case, it was a statement against racial attitudes and treatment of the American Indian, centered primarily around the buffalo slaughter by whites that took place from the 1850s through the 1880s and played a huge role in the final conquest of the red man. Unfortunately, the end result is that neither the film’s message nor its entertainment value score particularly high.

All the ingredients are here: Great cast; great scenery; good musical score; interesting central story line; and several highly effective scenes. The trouble is, it plays out too disjointed, too slow, and way too long.
The two lead characters are played by Stewart Granger as Sandy McKenzie, a savvy frontiersman and former renowned buffalo hunter who has grown sick of the slaughter and killing in general; and Robert Taylor as Charlie Gilson, a former soldier/now gunslick who thinks killing is “perfectly natural” and is looking to make a big money score in the belief that the buffalo (thought by most to have been hunted to near extinction) are coming back and represent the opportunity for quick wealth from their hides. The two men form a tenuous partnership to go after the buffs, McKenzie agreeing reluctantly because his cattle herd has been wiped out and he badly needs the money. Tension quickly begins to build between the men, however. Gilson is a foul-tempered, thoroughly unlikable, borderline psychotic individual who not only has no regard for buff slaughter or killing in general, but also has a simmering hatred for Indians; McKenzie, though competent and plenty tough, is peace-loving and easy-going and was partially raised by Indians. One of the big problems (for me, at least) was how much verbal and physical abuse (to others in their buff-hunting crew – including forced attention on a captive Indian maid) McKenzie allows Gilson to get away with before he finally stands up to him.
Speaking of the buff-hunting crew that accompanies McKenzie and Gilson, one of them is a peg-legged skinner called Woodfoot who is played in a rather unlikely turn by veteran Lloyd Nolan. Unlikely or not, Nolan seems to take his cues from the likes of Walter Brennan and Gabby Hayes, dutifully chewing up every shred of scenery where he appears and ends up darn near stealing the whole show. Taylor turns in a good performance, too, as the evil Gilson. 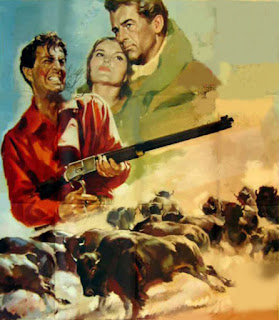 In fact, all of the performances and the production values straight across the board are solid. The scenes of actual buffalo dropping from heavy-caliber rifle shots (filmed when Custer National Forest rangers were “thinning” the existing herd there at that time and then cut into sequences of the actors taking staged shots) are disturbing and impactful in their own right and drive home much of the movie’s “message” almost better than the written script. Ultimately, it is the pacing and the disjointedness between some of the key scenes that drags everything down.
Still, it is a movie worth watching, if for no other reason that it is a seldom-discussed Western and for the powerful twist ending that is apt to stick with you long after the sluggishness of much of what has gone before.
Not sure if it is available on DVD, but it plays periodically on cable’s TCM. You might want to keep an eye out for it and give it a look next time it’s on.
Posted by wayne d. dundee at 7:51 PM 1 comment: 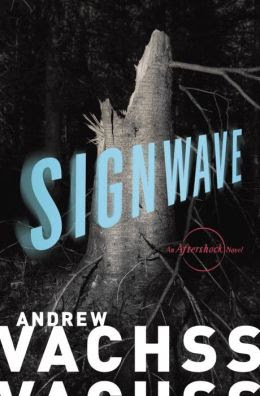 A new novel by Vachss is always an event, and SIGNWAVE --- third in the Shockwave series, featuring former legionnaire/mercenary Dell and his beloved wife Dolly --- is no exception.
As always, the prose is scalpel sharp, the insights are deep and impactful, and the family of choice and anti-abuse against the vulnerable messages are as strong as ever. Threaded through all of this, however, SIGNWAVE is as much as anything a love story --- the love between Dolly and Dell, and particularly the ultra-devotion of the latter to keep his wife secure and safe in the “dream home” he has established for her.
The flashbacks describing Dell’s former life as a soldier and assassin, the lessons that shaped him and made him a survivor of those worlds, not only relate some mesmerizing events but also serve to help the reader under-stand the steps he feels compelled to take, even in his new life, for the sake of protecting that which he loves. And when Dolly receives a thinly veiled threat regarding some curious land dealings she is peripherally involved with, Dell’s obsessive *protect* sensors go on full alert. In the course of investigating the man who made said threat, Dell uncovers complex business maneuvering, false identities, corruption and duplicity at many levels from many angles.
It will take all of Dell’s savvy and some very harsh measures on his part --- not to mention some aid from the ever-strengthening, family-like circle of friends surrounding Dolly and him --- before security is once again restored to their “dream” environs.
Another intense, powerful, multi-layered gem from Vachss. Nobody does it better.
Strongly recommended.
Posted by wayne d. dundee at 4:14 PM No comments:

Congratulations to all! Well deserved all the way around.
For anyone who hasn't read all of the titles, I strongly suggest you get in gear --- otherwise, you'll be missing some mighty fine reading.


LIFE ACHIEVEMENT PEACEMAKER:
James Reasoner
James has been a professional writer for nearly forty years. In that time, he has authored several hundred novels and short stories in numerous genres. Writing under his own name and various pseudonyms, his novels have garnered praise from Publishers Weekly, Booklist, and the Los Angeles Times, as well as appearing on the New York Times, USA Today, and Publishers Weekly bestseller lists. He lives in a small town in Texas with his wife, fellow author Livia J. Washburn.

Western Fictioneers would like to thank C. Courtney Joyner, the Peacemaker Awards Chair and all of the judges for their hard work this year.
Posted by Livia J Washburn at 12:00 AM