Another Look: STREETS OF FIRE (directed by Walter Hill, 1984) 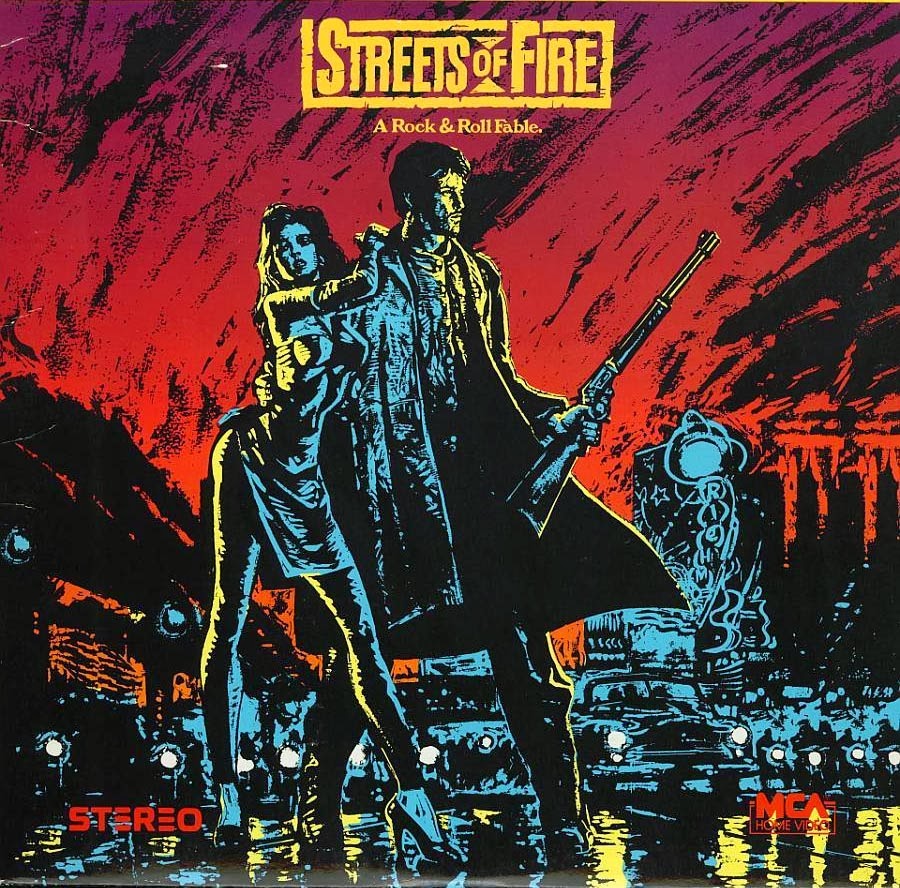 This is one of my all-time favorite films, but I can't say exactly why.

It is a quasi-retro, quasi-futuristic mix of music, violent action, romance, and rough-edged comedy.
When it first came out, it was billed as "a rock and roll fable". I'm not sure what the hell that's supposed to mean --- didn't know back then, still don't today. My description above might be a bit of a mish-mash, but I like it better. And as far as that "fable" business, maybe a lot of other people didn't get it either. Because the movie tanked at the box office.

STREETS OF FIRE was geared to be a big-budget summer blockbuster coming on the heels of writer-director Hill's smash 48 HOURS, and plans were in place right from the beginning for it to be the first in a series of Tom Cody (the hero of STREETS, played by Michael Pare) adventures. And although STREETS has since gone on to become something of a cult classic (largely due to the musical score) its initial poor performance quickly squelched chances for any follow-ups. (However, a small-budget "unofficial sequel", also starring Pare, was released in 2012.)
It is my contention that STREETS might have been the big hit it was intended to be right from the get-go if Hill had found a way to incorporate into his tag line the personal feelings he has since stated were his goals. To make what he'd thought would be "the perfect film" when he was a teenager, containing: "custom cars, kissing in the rain, neon, trains in the night, high speed pursuit, rumbles, rock stars, motorcycles,  jokes in tough situations, leather jackets, and questions of honor."
Okay, then. Now I understand why I like this movie so much!

Plot-wise, STREETS is pretty simple and straightforward.
It starts with fast-rising music star Ellen Aim (played by a very young yet very sultry Diane Lane) returning to her home turf in an unnamed city to perform a benefit concert. The show is interrupted by the Bombers, a notorious motorcycle gang led by Raven (played in menacing style by Willem Dafoe in one of his earliest villain roles), who arrive to wreck and ravage and kidnap Ellen right off the stage. The authorities are helpless to do anything. Until Tom Cody (Pare), Ellen's former boyfriend and now soldier of fortune, is contacted by his sister to come back home. 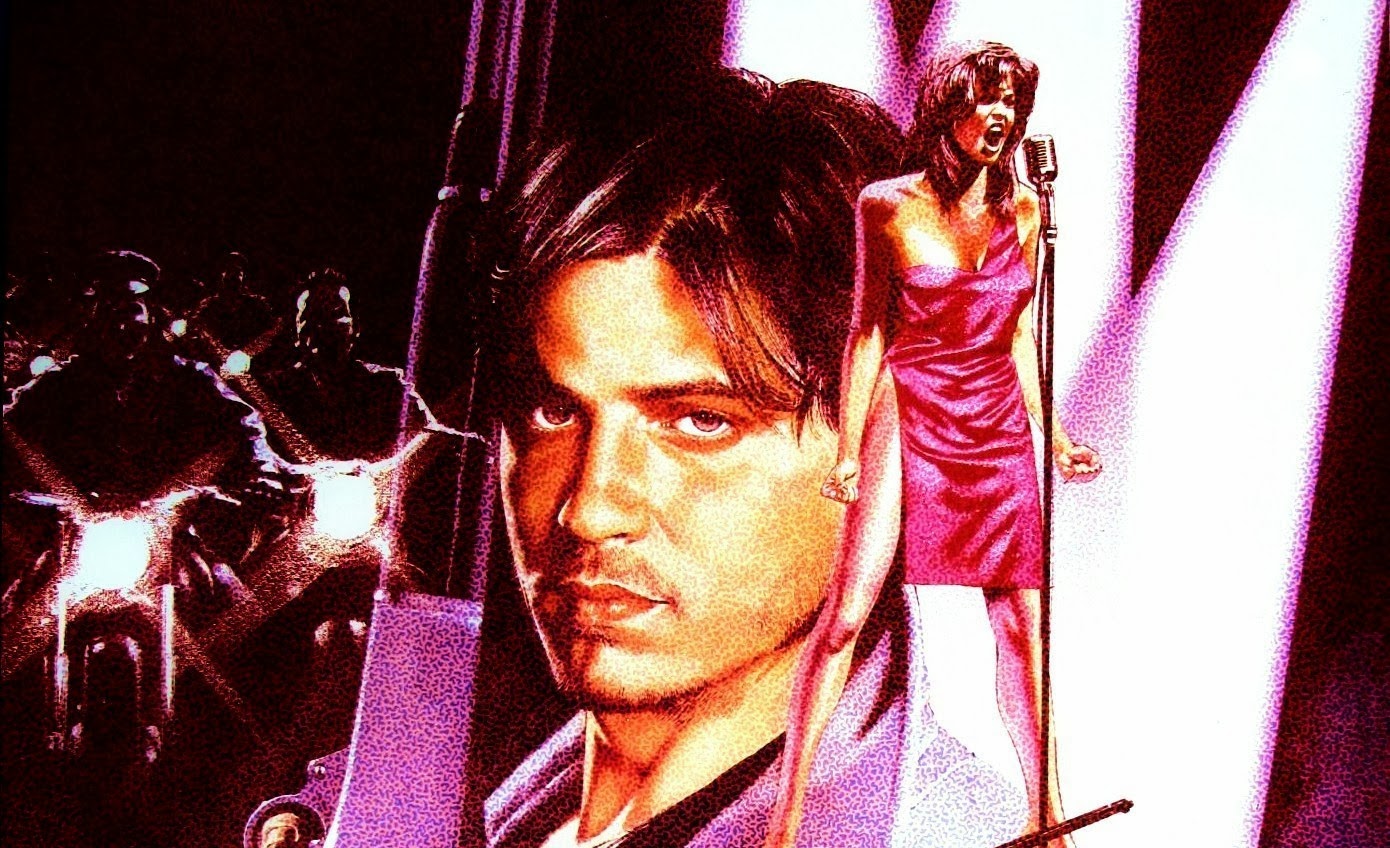 He returns and agrees to go and bring back Ellen --- for a price, to be paid by her manager and current boyfriend, Billy Fish (Rick Moranis). With the help of McCoy, another soldier he runs across who also happens to be "between wars" (played by Amy Madigan in a show-stealing performance in a role originally written for a pudgy, middle-aged male), Cody stages a daring raid into the heart of Bomber territory and rescues Ellen.
This only results in the Bombers coming after her again in full force. When the police are unable to hold off the motorcycle horde, it falls once more to Cody (backed by a mob of angry, well-armed, defiant citizens) to square off against Raven in a one-on-one battle with sledge hammers to settle the conflict. When Cody wins the savage fight, the Bombers ride off and it is over. So is the almost-rekindled romance between Cody and Ellen. Telling her how it has to be, Cody says, "Your music is going to take you places and, let's face it, I ain't the kind of guy who's gonna go around carrying your guitar case."

Yep, pretty much the basic plot from a hundred B-Western movies where the loner shows up in town to take on the black hat bad guys that the law can't handle and then rides off into the setting sun when his work is done.
In STREETS OF FIRE it's all presented with a few new twists and top quality production values, including the custom cars and neon and rain and the rest of the elements from Hill's "perfect teenager" movie, all driven by a pulsing, pounding "Wagnerian rock" score.

A fable? A mish-mash? Retro? Futuristic?
Hell, I still don't know for sure.
All I know is that I like it. A lot.
If you've never seen it or haven't seen it in a while, it plays on the various cable channels fairly frequently. You might want to check it out. I think you'll find there are a helluva lot worse ways to spend an hour and a half.
Posted by wayne d. dundee at 10:15 AM

In my head I've always considered STREETS OF FIRE's unnamed city to be Batman's Gotham City in the 1950's.

I like this one, too. Had to go out and buy a Balsters cassette immediately after I saw it.

Watched this one dozens of times on HBO, loved it. Hill can be hit or miss, but this one is a definite hit.

Diane Lane. The reason I watch this every time.