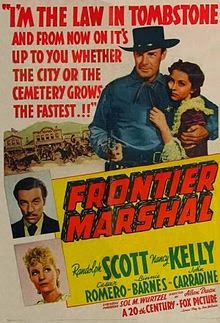 After stirring things up a little bit some days back with my less-than-enthusiastic remarks about the classic Western film, MY DARLING CLEMENTINE (1946), I subsequently had a chance to view FRONTIER MARSHAL (1939), another earlier film based on Stuart N. Lake's highly fictionalized biography of Wyatt Earp.

In a way, I guess that makes Lake the main culprit behind the drastic swerves from historic accuracy taken by both films. Lake even gets co-writing credit on this one.
And, just to make the cheese more binding, as an old pal of mine used to say, there was a third Earp film --- done in 1934, making it actually the first of the three that will be under discussion here  --- also based on Lake's book. This one had the same FRONTIER MARSHAL title and starred George O'Brien. Thanks to behind-the-scenes manipulations and threatened lawsuits by Wyatt's widow, Josephine (for reasons I'm not clear on), this telling of the Earp legend was restrained from using the name "Wyatt Earp" for its protagonist but rather called him "Michael Wyatt". I haven't seen this one yet but if it follows the apparent trend of getting fewer and fewer facts straight the earlier these cinematic ventures were undertaken, then the 1934 version must have played real loose with the truth.
In other words, working backward, if MY DARLING CLEMENTINE mangled the facts about Wyatt, Doc Holliday, Tombstone, the OK Corrall, etc. … then the 1946 version of FRONTIER MARSHAL took those same mangled facts, threw them on the ground, stomped 'em into the dirt, then put the spurs to 'em.

So if a still earlier version was even more careless … well, one can only cringe at the thought.
Just as a reminder, though: My main beef with MY DARLING CLEMENTINE in my earlier post was not so much with the mangled facts or even to suggest that it was totally without merit --- what continues to bug me about it is why it is so highly lauded, often over Western films that in my humble opinion are far superior.

As for FRONTIER MARSHAL, the title of this post, it too has its merit --- strictly as a good action oater, never mind the whole Wyatt Earp thing. Randolph Scott plays Wyatt, and he's always enjoyable to watch; and Ceasar Romero does a surprisingly effective job as Doc Holliday (for some reason called "Halliday" in this film). The tension between the two comes across well and the various action set pieces and shootouts are a good mix of bravado and at times a genuine sense of danger. The villains that provide conflict for Wyatt and Doc in this case are not Ike Clanton and his rustler gang but rather a saloon owner called Ben Carter (in an uncharacteristically low-key performance by John Carradine) and his hired thugs. The closest thing to reality as far as the outlaw gang in this telling is to have one of the bad guys called Curly Bill (Brocius, one can assume?); plus Wyatt's brothers are totally absent. A secondary plot involving the two women in Doc's life --- Jerrie, his current flame, a saloon entertainer; and Sarah, his former nurse and lover who has followed him to Tombstone to try and salvage their former relationship --- is very well done and results in some deeply emotional scenes. 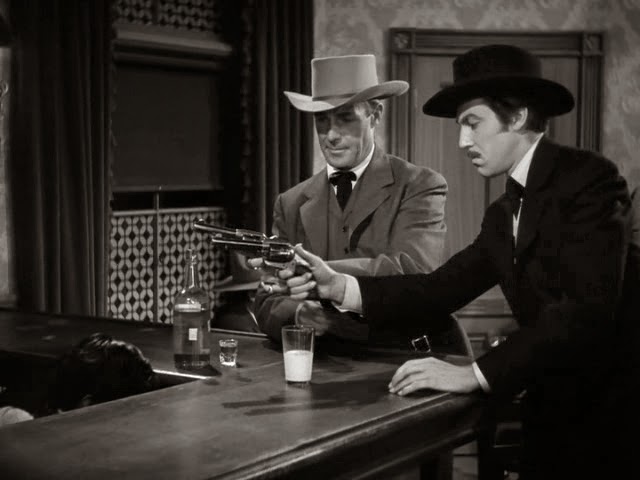 When the infamous shootout at the OK Corral occurs, Doc has been killed from ambush and Wyatt goes it alone to cut down Curly Bill and the remaining members of Carter's gang.
All and all, like I said, a decent enough film --- strictly as an action oater.

Additional notes: 1.)  Actor Ward Bond (a member of John Ford's famous stock company and real-life buddy of John Wayne) appeared in all three of the movies discussed here. In 1934 as a character named Ben Murchison; 1939 as the nameless Tombstone town marshal from whom Scott (as Earp) takes over when Bond proves too cowardly to confront a drunken Indian shooting up one of the saloons; and, finally, in 1946 as Morgan Earp. 2.) It occurred to me while watching FRONTIER MARSHAL how dead nuts perfect John Carradine, with his painfully thin appearance yet powerful screen presence, would have been for the role of Doc Holliday;  3.) Note the terrific tag line from the playbill poster for FRONTIER MARSHAL > "I'm Wyatt Earp – I'm the law in Tombstone and from now on it's up to you whether the city or the cemetery grows the fastest!"

Great review! Despite decent performances, this is the silliest Earp film I've seen yet. One of these days I hope to catch the 1934 version. I'm also still waiting to see "Law and Order" (1932), which I think was the first film treatment of the Earp saga. It was based on W.R. Burnett's Saint Johnson (1930)- published before Lake's book - which set the stage for stretching the truth in odd directions. I looked at that book here: http://davycrockettsalmanack.blogspot.com/2014/01/forgotten-books-saint-johnson-by-wr.html

Good to see the debate continuing, Wayne. Frontier Marshal is another western I have on videotape and have never considered to require wiping -- not because it's exceptional, but because it does encapsulate an appeal that has lost currency with modern audiences. Good entertainment, perhaps, when nostalgia beckons.

Some seven years ago, I expressed some views on what made a "great" western, quoting from a Houston newspaper movie critic, Bruce Westbrook. I repeated the essay last month, in modified form, at the back of the new ebook version of Peace at Any Price. One reviewer has already kindly commented that he enjoyed “The Heart of a Western” as much as the novel. Since he gave the novel itself a five-star rating at Amazon, and called me "a hell of a writer" (!), I take it the essay struck the right note, too.

Good stuff, Wayne. Years ago I saw an interview with John Carradine in which he discussed the casting in Frontier Marshall. He wanted to play the Doc Halliday part but didn't get it. I'm paraphrasing, but he said something along the lines of, "They gave it to Cesar Romero, a strapping, healthy specimen of manhood, while I am the living embodiment of incipient tuberculosis."