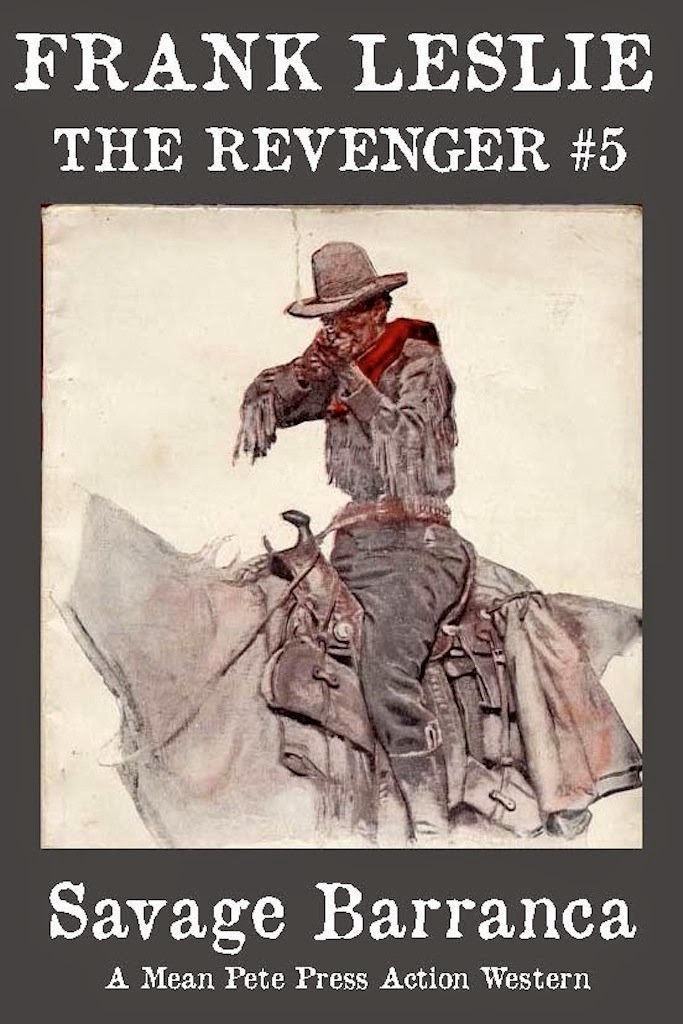 Mean Pete, Frank Leslie, and Mike Sartain, The Revenger, make an unbeatable team when it comes to tough, gritty, adult Western adventure tales!
The twist in this one is that Sartain is doing a job *for* the government instead of being on the run from it … and the "insurance policy" the governor of New Mexico Territory sends along in the form of a beautiful lady Pinkerton, to make sure The Revenger holds up his end of the bargain, only adds spice to the brew.
As anyone familiar with the Leslie (or Brandvold) byline should know to expect by now --- there is danger, double-dealings, hard riding (in more ways than one), and enough gun-blazing action to satisfy all who relish the rowdy days of yesteryear.
Don't hesitate, mount up and enjoy the ride! 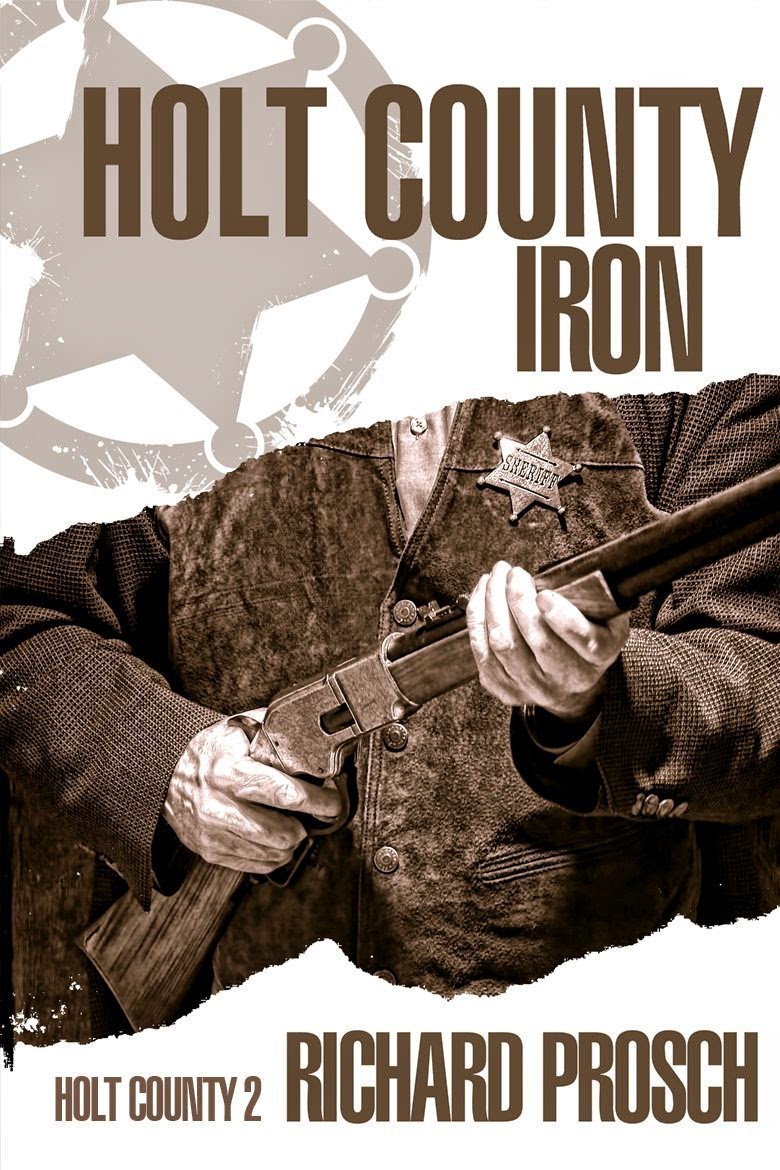 The evolution of Richard Prosch's wonderful Whit Branham character continues in this solid new novella, the longest single entry in the series so far. And Holt County, Nebraska, circa 1882 --- both its colorful array of people and the land itself --- also emerges more and more distinctly in the evocative, subtly stylish prose that has become one of Prosch's trademarks.
There is plenty of action in this yarn, starting almost immediately with a shootout that culminates in the rundown of a vengeful fugitive … and ending with a nasty conflict in the midst of a howling blizzard, this one culminating in a shocker of a twist sure to catch even the most alert reader by surprise. But the characterizations --- the quirks, the uncertainties and weaknesses, the *realness* of those presented --- enhance everything to a higher level. And the "iron" of the title is, to some degree, in all of them. This is true of none more than Whit, of course, making him the tough, reliable hero at the center of the story … yet nevertheless remaining also very human, even humble at times, with his own share of personal problems and issues.
In the course of telling a rousing good tale, Prosch does a fine job of conveying a genuine sense of the time, place, and people. You can tell that, as a writer, he cares about all of these things. As a reader, you will too. Enough to make you want to read more of this series and, if you're smart, anything else you can get your hands on with the Prosch byline.
Highly recommended.
Posted by wayne d. dundee at 8:43 PM No comments:

Anthology In Memory of C.J. HENDERSON: A Kickstarter Project

Earlier this year, I wrote about the passing of my old pal C.J. Henderson.
My association to Chris went back a long ways and was mainly linked through his Jack Hagee and Teddy London stories and novels.
But Chris wrote extensively in other genres and had a wide, wide range of friends and fans from his writing and the many appearances he made at numerous book conventions and conferences … right up to the end.
It's been brought to my attention that some fine folks who were touched by Chris, either through his writing or appearances or both, are working on a tribute anthology that deserves wide attention.
I pass this on for your consideration:

Danielle Ackley-McPhail has put together a tribute anthology for C. J. Henderson, who passed away last July. She's funding it through Kickstarter. If any of you can spread the word it would be greatly appreciated.
Here's the link:
http://kck.st/1xu1DH9 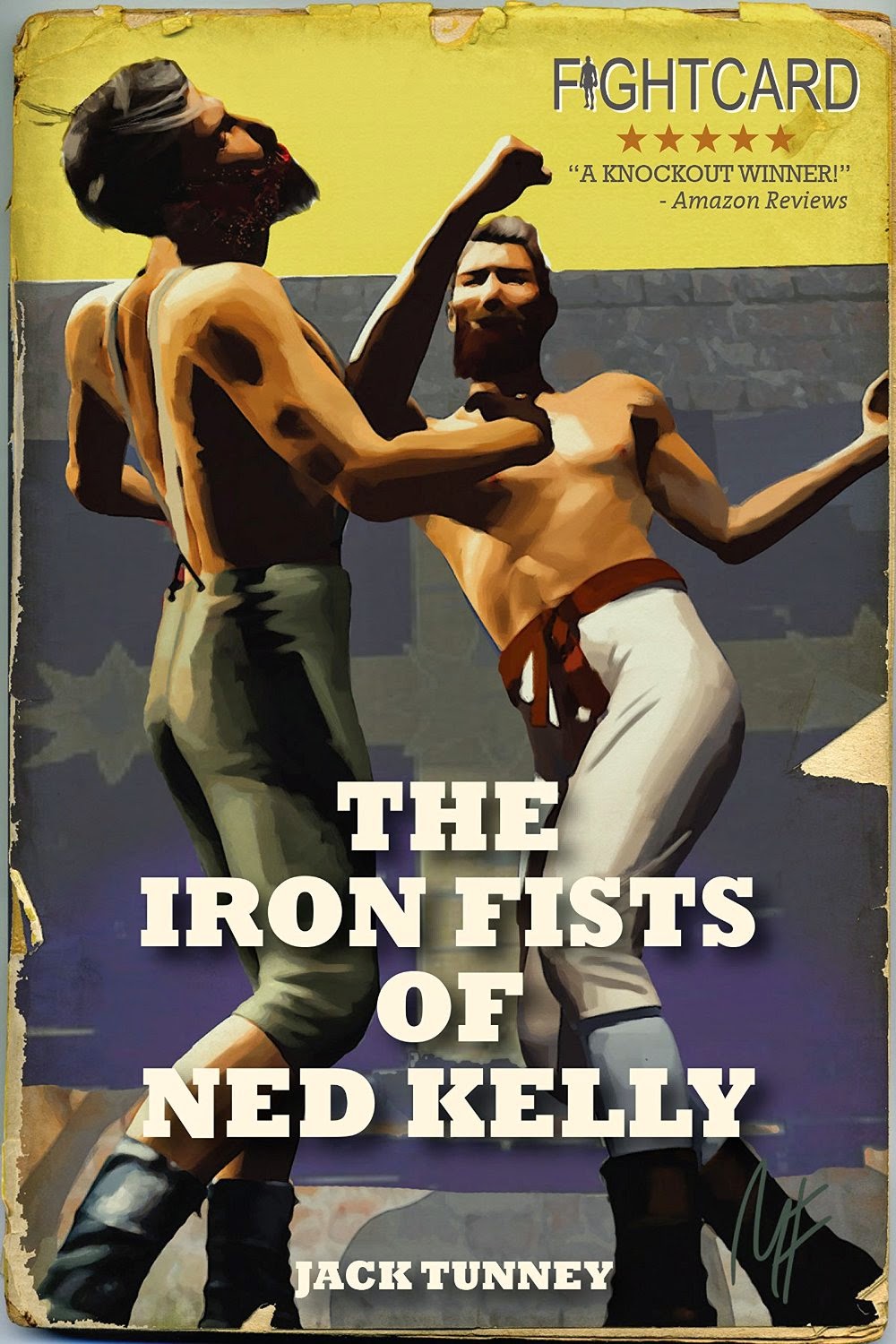 This latest in the Fight Card series (with David Foster behind the Jack Tunney byline for a second time) is another case where a rousing fight climax is cleverly interwoven with historical events and people --- such as most recently done with the JFK assassination and a fictionalized extension of the life of pulp writer icon Robert E. Howard.

This time around, the historical figure – as clearly indicated by the title – is Australia's infamous, romanticized, Robin Hood-like outlaw/folk hero, Ned Kelly. Although author Foster manages to incorporate much of Kelly's brief, violent history (he was hanged at age 25) via a "framing" device in which Kelly is talking to a priest before going to the gallows, the main thrust of the tale involves a bare knuckle fight between a young Ned and another rowdy Irishman named Isaiah "Wild" Wright. In an Afterward, Foster reveals that the fight actually did take place, although it may not have been on as grand a scale as re-told here. Kelly and Wright would go on to become good friends and Wright would even become a member of Kelly's gang in later years.
Foster (an Australian himself) clearly knows and has a fondness for his subject matter. His writing style is fast-paced, with frequent cuts in and out of different scenes building up to the prolonged and exciting climactic big fight. A strong sense of time (late 1800s) and place is conveyed, enriched by the use of local slang and a wide range of colorful characters.
All and all, an exciting, rollicking good tale that leaves you feeling as if you were given some real insight into Ned Kelly and the hard, harsh circumstances of the time in which he lived, fought, and rebelled.
You're sure to have a good time with this one.
Recommended.
Posted by wayne d. dundee at 8:39 AM No comments: 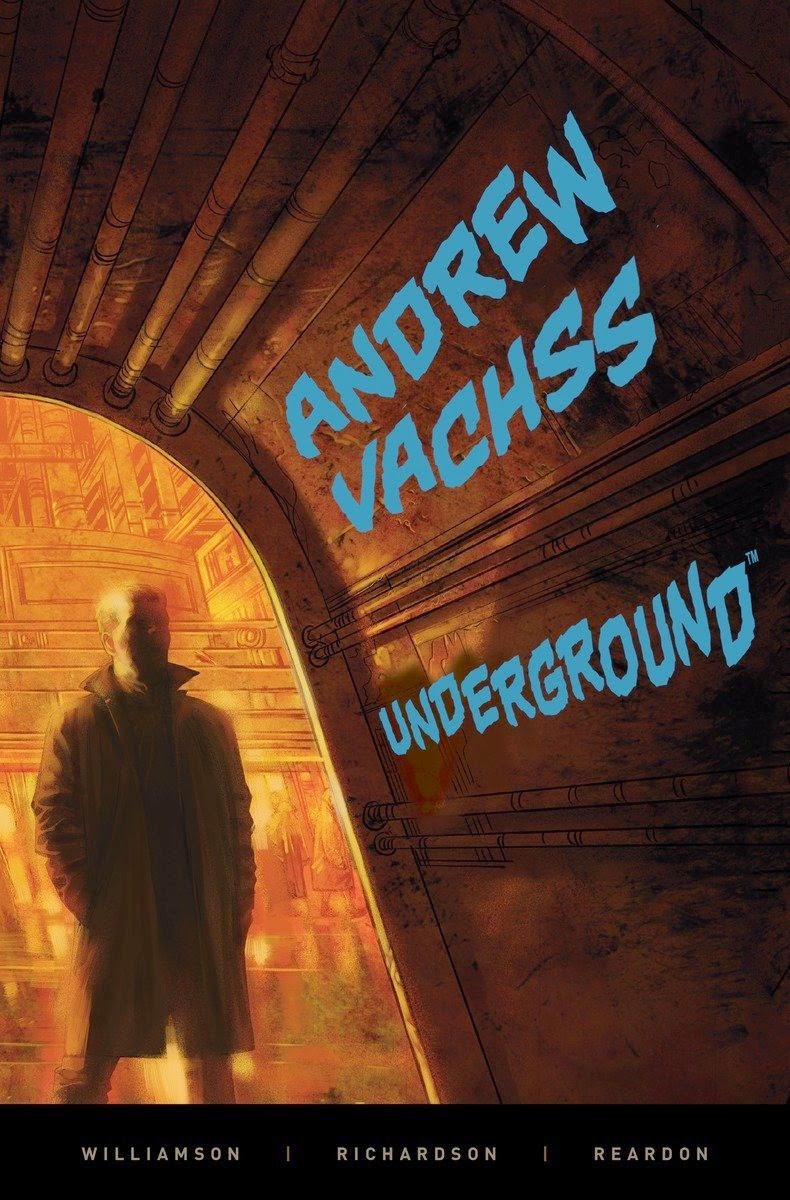 This latest work by Andrew Vachss is a futuristic tale of repression, deceit, corruption, control, rebellion … and, ultimately, hope and survival.
Underground has been built by the Rulers to escape the Terror. Whatever the Terror is – or was – is never made quite clear to the citizens of Underground. They need only to believe and trust that the Rulers have their safety and well-being at heart. Strict adherence to the ever-growing, ever-evolving, often harsh "Rules" under which people must live are necessary --- even at the cost of their individual liberties --- in order to survive the Terror. Beyond the protection within Underground's charted tunnels, no one can survive.
A large part of the Rulers' power over Underground comes from control of all news media and education. What is thus imparted becomes the accepted truth. It is only with the rise of the "Book Boys", who begin spray-painting the walls of the tunnels with graffiti done in a specialized blue ink that the real truths are told to citizens who are willing to open their eyes and pay attention. From these words, these truths, a path out from under the thumbs of the Rulers may be found …

As usual with a Vachss book, there are many layers and nuances to this story. Different readers will take away different things; and re-readings may reveal previously unrealized points. In UNDERGROUND, the many parallels to today --- the biased news media, government over-regulation (my take, my opinion), the infringements into our personal freedoms for the sake of our safety and overall good, etc. --- are unmistakable and can be taken as a warning of what might be just around the corner if we aren't careful. The abuse of our young and vulnerable (the theme Vachss always incorporates – "I have but one song to sing" is his often stated goal) is here, too, and is the hinge upon which so much else pivots.
UNDERGROUND is available in a beautifully produced, hardbound graphic novel from Dark Horse Books. The story is from an original screenplay by Andrew Vachss. Scripting is done by Mike Richardson and Chet Williamson. Internal artwork is from Dominic Reardon and Keith Champagne, with a striking front cover by Sean Phillips.
And an afterward ("Leaving the Underground") by the always insightful Zak Mucha provides a fine analysis of the work and an overview of what Mucha calls Vachss's "unrelenting message": Crimes against children are the greatest danger our society faces.

A powerful, important work - not to be missed.
Highly recommended.
Posted by wayne d. dundee at 10:09 AM No comments:

The BODIE KENDRICK Series --- Re-formatted, Re-priced, and Ready to Ride into Your Action-Western Library

The supportive hands of the good folks at Bil-Em-Ri Media continue to keep busy.
As a result, the three titles (so far – more coming soon) in my Bodie Kendrick – Bounty Hunter series are now all under the Bil-Em-Ri banner. They've been re-formatted to feature a set of "theme" covers and --- best of all, for potential readers --- they have been re-priced on Amazon Kindle to a bargain $0.99 each.
If you are not yet familiar with the Bodie and his adventures, this is your chance to get caught up at a very modest expense.
Here's what reviewers and peers have had to say about the available titles:

"Plenty of action, sympathetic characters, snappy dialogue, surprising twists, and even a bit of romance."

"The protagonist is tough and likeable, the villains are suitably evil, the setting is rendered in vivid prose, and there are plenty of great action scenes."

"Great stuff … Dundee writes the kind of Westerns that harken back to the Golden Age."

"There's tons of adventure, gun-play and romance along with great characters in high stakes situations."

"In a relatively short period of time, Dundee has become one of the best Western writers in the business."

"Great narrative, lots of action and dialogue, and larger-than-life characters that leap right off the pages."

Saddle up and ride with Bodie!
I think you'll be glad you did.
Posted by wayne d. dundee at 1:43 PM No comments: