Table of Contents:
When!? by Linda Sarah
The Questions by Alison Arngrim
City Water by Allison Glasgow
Black and White and Red All Over by David Morrell
Silvia Reyes by P.J. Ward
Plan B by Andrew Vachss
Gatekeeper by Richard Prosch
The Night Watch by Susan Schorn
One Night in Brownsville by Gary Phillips
Silverfish by S.J. Rozan
Parental Guidance by Scott Adlerberg
Superhero, With Crooked Nails by Rachael Acks
Angel by Terrence McCauley
Mr. Nance by Linda Rodriguez
Something I Said by Bracken MacLeod
El Puente by Rios de la Luz
Mesquite by Graham Wynd
Level 5 by C.R. Jahn
On the Road to La Grange by Karina Cooper
Reprisals: Enmity by John A. Curley
The Whistler in the Graveyard by Chad Eagleton (illustration by Dyer Wilk)
Solar Highway by S.A. Solomon
Jibber Jabber by Reed Farrel Coleman
Doll: A Poem by Jyl Anais Ion (illustrations by Jyl Anais Ion)
Doggone Justice by Joe R. Lansdale
The Occurrence of the Black Mirror by Teel James Glenn
Sister Cecilia by Hilary Davidson
Croatoan by Harlan Ellison®
Little Howl on the Prairie by Thomas Pluck
Things Held Dear by Neliza Drew
49 Foot Woman Straps It On by Laird Barron
Moon Over the Midwest by Elizabeth Amber Love
Sixth Floor by Albert Tucher
Adamsville by Clare Toohey
Point of View by Will Graham
High Meadow Storm by Wayne Dundee
Out of Context by Joelle Charbonneau
Lone by Alex Segura (illustrations by Dennis Calero)
Love and Valour on ‘the Victorian Titanic’ by Gill Hoffs
Just Pretend by Martyn Waites
Freak by Charles de Lint
The New Heroes of the Old Fairgrounds by K.L. Pereira
When the Hammer Comes Down by Josh Stallings
Stretching Fifteen by Angel Luis Colón
Bounty by Jerry Bloomfield
Light-Bringer by Laura K. Curtis
Hercules and the Spawn of the Titans by Michael A. Black
How to Paint Your Dragon by Andrew D’Apice
Don’t Fear the Ripper by Holly West Two Views by Tim Daly
A Hundred Pearls by Errick Nunnally
Snapshots by Christopher Irvin
Deceit by Joyce Carol Oates
The Perfect Weapon by Zak Mucha
An Open Letter to the Children of the Secret by Dionysios Dionou
Behavior is Truth by Gwyndyn T. Alexander
Pigeons for Protect! by Linda Sarah
Posted by wayne d. dundee at 9:34 AM No comments:

Noteworthy Reads: BETWEEN THE LIVING AND THE DEAD by Bill Crider 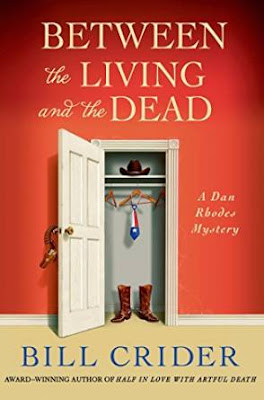 This is the twentieth title in the Sheriff Dan Rhodes series, and if you haven’t been keeping up … well, why the heck not? These are some highly entertaining mysteries written by a highly skilled author.

BETWEEN THE LIVING AND THE DEAD is no exception. Everything readers have come to expect from a Crider/Rhodes tale is here: A nicely rendered rural setting, a wide range of colorful characters, a nice dose of humor, snappy banter, and a solidly plotted mystery. The latter includes a couple of murders, drug trafficking, bull riding, a feral hog stampede, and maybe even some ghosts. Among other things.

Sheriff Rhodes is the anchor, the center post to all these goings-on and the one who will eventually get it all sorted out. Author Crider is the puppet-master who pulls all the strings on the events that keep Rhodes so busy. Together, as always, they make a formidable pair.

A fine series and a fine new addition to it.
Strongly recommended.
Posted by wayne d. dundee at 6:03 PM 1 comment: 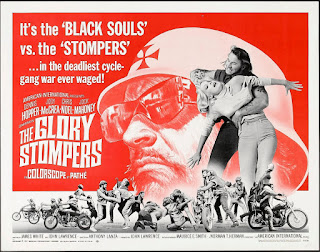 Throughout the middle 1960s and into the ‘70s, most of my movie-going was at outdoor drive-in theaters. For these basic reasons: It was cheaper, you usually got a triple feature (more for your money), and if you were a roaring pile of teenaged hormones like I happened to be back then, there were always back seat activities with which to pass the time if (a) you were lucky enough to have a date equally inclined toward, er, romance; or (b) if the movie(s) stunk too bad. In the case of triple features there was generally a good chance that at least one of the films on tap was a stinker (which gave helpful incentive toward the back seat thing).

In the summer of 1967, when THE GLORY STOMPERS was first released (or escaped you could rightfully make the argument) Pam and I had been married less than a year and were both only nineteen. Married, though still not adverse to a bit of back seat frolicking.
Which is the only way I can explain how I/we could have seen STOMPERS so many times yet come away remembering so little about it. (Okay, maybe it was some kind of intuitive self-protection thing --- you know, like when your brain shuts out a horrific experience so as not to forever traumatize you.) At any rate, we must have seen STOMPERS at least a half dozen times over the course of that summer and probably part of the next … always as a “fill in” to something else we had actually gone to see. It was awful the first time we saw it and only got worse with repeated viewings. But biker flicks (which Pam hated in general) were big back then so there were plenty of them available to help round out the bill as a “filler”.

Flash forward almost forty years to the other night when cable’s Turner Classic Movies ran a showing of THE GLORY STOMPERS. After I got past the shock of wondering how it could be included in anything under the heading of “Classic”, I couldn’t resist … I DVR-ed it to see how it held up. Not surprisingly, it was as bad as ever. In a sense, I guess you could say it held up good as far as matching my memory of it being so bad.
Other than that, what struck me was how much I had totally forgotten about its content. There was Dennis Hopper chewing up scenery like nobody’s business (alternately in a drugged-out haze or frenzy, yet providing the only thing close to true acting found anywhere in the whole damn flick); there was terribly wooden Jody McCrea and sexless Chris Noel as the romantic “leads”; there was menacing Robert Tessier scaring the shit out of you just by being himself … and – even more shocking that STOMPERS being associated with anything termed “classic” - there was Jock Mahoney in an important supporting role! Jock Mahoney … The Range Rider, Yancy Derringer, Tarzan … one of Hollywood’s all-time greatest stuntmen, perhaps second only to Yakima Canutt … I’ve been a huge JM fan ever since I was a little kid, yet I had ABSOLUTELY NO RECOLLECTION of him being in this movie.


Yeesh! Pam and I must have steamed up those car windows far more aggressively than I remembered.
But, ultimately, it didn’t really matter. THE GLORY STOMPERS was gloriously worth missing --- even with ol’ Jock in it.
I might try it again in another forty years or so … But not any sooner.
Posted by wayne d. dundee at 11:49 AM 2 comments: