Yesterday marked what would have been the 100th birthday of Mickey Spillane. Spillane was one of – if not THE -- most influential mystery writers of the twentieth century, certainly the last half. And surely the top seller. At one point seven of the top ten best selling mysteries carried the Spilane byline. When one of his many critics lamented that fact, Spillane famously quipped: “They're lucky I didn't write three more.” 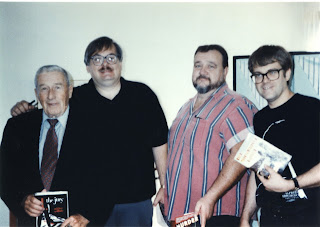 I had the distinct honor and privilege of meeting and spending a couple of days around Mr. Spillane back in the summer of 1996, on the set of Max Allan Collins' film, Mommy 2: Mommy's Day. In the accompanying picture, left to right, you see Mr. Spillane, Lynn F. Myers (a mutual friend), myself, and Max. Spillane had a starring role as Mommy's lawyer, I had a non-speaking bit part as a prison guard who wheels Mommy to the lethal injection chamber. (SPOILER ALERT: Mommy turns the tables so that doesn't quite work out.)
When Collins first invited me to come be a part of the filming, I naturally agreed. Then wisecracked: “Do I get to be a prison guard for the women's shower scene?” To which Max sternly replied there was no women's shower scene. Still trying to be a smart ass, I asked why do a women's prison movie without a shower scene? But Max remained unamused. He took his planned movie very seriously and rightfully so – it turned out to be an entertaining, much-acclaimed film. It's available on DVD, if you're interested – and I'm not encouraging that because of my meager part, but rather because it's a nifty little thriller that I think you will enjoy. In addition to Spillane, it stars Patty McCormick, Gary Sandy (from WKRP In Cincinatti), and Paul Peterson (from The Donna Reed Show).

But the main gist of this post is to recognize, on what would have been his 100th birthday, the power and importance of Mickey Spillane and his work.
Thanks to the strength of his writing and to the continuing efforts of Max Allan Collins (at the urging of Mickey before he died) to complete many of Spillane's partial manuscripts, his work continues to be enjoyed by millions yet today.
As for me, I'll always not only have the satisfaction of enjoying said work, I also will have the memory of meeting Mr. Spillane in person and finding him to be every bit as cordial and engaging as you would hope for one of your heroes (and influences) to be.
Happy birthday, Mickey!
Posted by wayne d. dundee at 9:12 AM 1 comment: 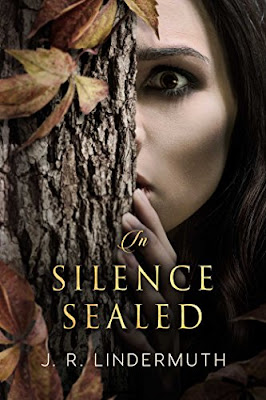 John Lindermuth's latest entry in his Sticks Hetrick mystery series is now available in both print and eBook formats, and it is a fine addition to the series.

If you're not already familiar with Sticks and the other folks from Swatara Creek -- and their encounters both in the line of duty and their personal lives -- then you need to be. Otherwise you're missing some sure-fire reading entertainment.

"Here's what I wrote in my Amazon review for this book:

IN SILENCE SEALED is a deeply satisfying murder mystery, rich with characterization and atmosphere, wonderfully complex in its plot twists. Bullet-fast scene shifts set a lively pace that utilizes a large cast of characters, anchored by the always-reliable Sticks Hetrick, and orchestrated by the sure hand of author Lindermuth. Don't miss this latest entry in the Hetrick series!"

Not a lot more I can add, other than -- what are you waiting for? Get your copy ordered and get set for a great read. You won't be sorry.
Posted by wayne d. dundee at 10:31 PM No comments: