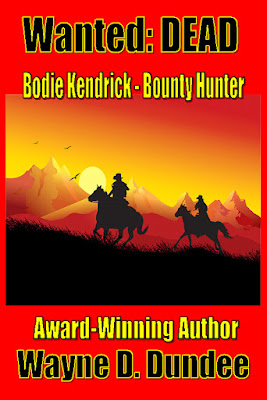 My latest title in the Bodie Kendrick - Bounty Hunter series (number 5) is now available on Amazon Kindle. Here's the cover blurb that hopefully will help catch your interest:


Bounty hunter Bodie Kendrick makes a living bringing in wanted men. Sometimes face down across a saddle. This time, though, the job is different. He’s being paid to safely escort a man home who’s already served his prison sentence. But there is another man—a powerful individual whose thirst for revenge burns hot even after seven years—who wants the ex con to get his new start only one way … Dead! He’s hired an army of ruthless killers to make that happen. In order to keep them from having their way, Kendrick will have to match them bullet for bullet across two hundred miles of rugged country packed with even more danger before he can call his job done.