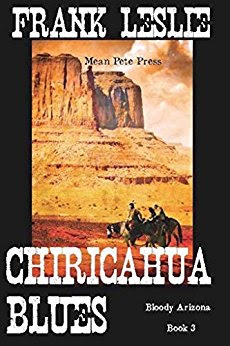 This third installment of Frank Leslie's "Bloody Arizona" quartet of Yakima Henry tales is once again an action-packed romp featuring everything readers have come to expect from Leslie (who, as most everybody knows, also doubles as Mean Pete Brandvold).

The characters are memorable (some of them in rather unpleasant ways), the plot twists and turns in unexpected and exciting ways, and the writing is rich in details that add that special Brandvold/Leslie touch. Yakima, nowadays the marshal of Apache Springs, is still finding his hands full with the two quarreling Kosgrove sisters in addition to trying to keep peace in the town. Additionally, much of the story this time around is focused on Yak's deputy --- the aging former outlaw known as the Rio Grande Kid --- who is escorting in a vicious killer and runs into trouble with some renegade Indians.

The two parallel stories switch back and forth and the action comes so hot and heavy readers will be breathless trying to keep up.
Strongly recommended! 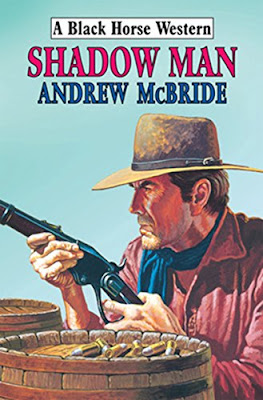 SHADOW MAN is the second novel in Andrew McBride's Calvin Taylor series, though you needn't have read the previous title to thoroughly enjoy this one.

Taylor is a hard-bitten veteran of the harsh Southwest frontier, a former Army scout and prospector, now hired on to scout for the Cameron wagon train, a small outfit beginning the perilous trip from Ore City to Rio Azul. The undertaking would be brutal enough under any conditions but with some renegade Apaches under the leadership of a chief called Loco raiding throughout the area, Taylor tries his best to warn Major Cameron against starting out. But the people in Cameron's party are desperate and worn down by hard luck and getting to Rio Azul is their last hope --- so they're willing to take the gamble. And, in order to give them their best chance for survival, Taylor feels compelled to stick with them.
What follows is a rousing, gritty, action-adventure filled with drama, suspense, betrayal, tragedy, and even a hint of romance.

Taylor makes a terrific hero and the cast of supporting characters is also colorful and memorable. The story takes numerous twists and turns, pitting Taylor against odds that at times seem impossible to overcome --- yet by raw guts and determination, he does.

The real star here, ranking right alongside Taylor, is author McBride's writing skill. He paints a vivid picture of the time and place and relates gritty, unflinching scenes rich with the enduring spirit and sometimes the savagery of the times. Here is a writer to watch and to savor. I urge you to seek out all of his titles --- like I know I am going to.
You won't be sorry you did. 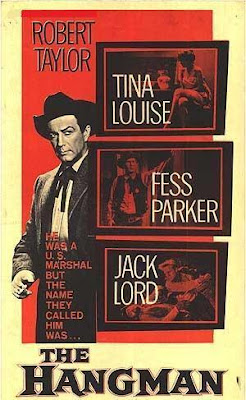 The title of this fine Western drama is deceiving and (for me, at least) somewhat off-putting. Turns out it's not about a hangman at all but rather a relentless U.S. Marshal named Mac Bovard (played by Robert Taylor) who has a reputation for bringing in the worst owlhoots in the territory, most of whom end up on the gallows. Hence it is he who becomes known as “the hangman”.

At the time of this tale, Bovard has been wearing a badge of one kind or another for 20 years and has grown hard-edged and cynical. As the story opens, Bovard is delivering the third of four men wanted for bank robbery and the killing of another marshal who was previously on the case. Two of the robbers have already been hanged and the just-delivered varmint is expected to have his turn in short order. It's up to Bovard to bring in the fourth and final man. Trouble is, though his name is known to be John Butterfield, Bovard doesn't know what he looks like. If he can't find anybody else who does, Bovard's last chance to get a positive ID on Butterfield may be to bring him in front of the other remaining gang member before the latter hangs.

With the clock ticking, Bovard chases leads from Fort Kenton to a distant town where he finds a very likely suspect --- a man calling himself John Bishop who everybody in town, including the marshal, likes and respects and refuses to believe could be a former outlaw and killer. As a last resort, Bovard pays money to a down-on-her-luck widow and former girlfriend of Butterfield's (played by Tina Louise) to come to the town and confirm that Bishop/Butterfield are the same person. Things don't work out that easily, of course; there are a number of twists, confrontations, a few touches of humor, and even some romance before Bovard closes the case.

This is a highly entertaining little gem that I greatly enjoyed watching. It's a slightly offbeat Western yet at the same time fulfills all the requirements for a satisfying oater. The opening scenes could almost qualify as a crime drama and, since it's filmed in black and white and the dialogue is crisp and snappy, it even has some noirish touches. As the story unfolds and the backdrop broadens, it becomes steadily more “Western-y”. 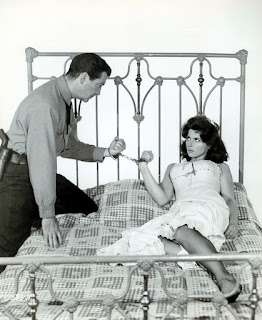 Robert Taylor turns in a great veteran performance, the pitch-perfect delivery of brusque, no-nonsense dialogue and intensity that fits his character dead-on; Fess Parker, as the amiable, chain-smoking town marshal (trying to break his Davy Crockett mold during this period when he was at odds with Disney) also comes across well; but the real surprise is Tina Louise as the alternately sultry/vulnerable former girlfriend who is torn between loyalty and the need for money to start a better life. The combination of acting chops and a more voluptuous figure (almost Sophia Loren-ish) completely blows away her typecast image of slinky Ginger from Gilligan's Island that would eventually and unfortunately stall her later career.

In the very capable veteran hands of screenwriter Dudley Nichols and director Michael Curtiz, this is an extremely entertaining film. I DVR-ed and watched it for the first time about a week ago and then, when I was getting ready to write this article, I decided to skim through some parts again to refresh my memory --- but instead of skimming, I found myself enjoying it so much that I watched the whole thing all over again.
I don't know if it's available on DVD. If not, watch for it on cable --- either TCM or the Western channel. It's definitely worth catching. You won't be sorry. 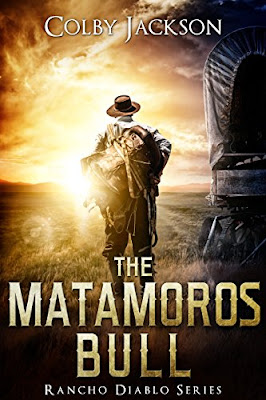 Readers of the popular, award-winning Rancho Diablo Western series have good reason to rejoice. Not only does MATAMOROS BULL mark a new, much-anticipated entry (ninth overall and the first one in four years), but it is an outstanding adventure well worth the wait. What's more, according to the author's note preceding the story, we've got three more titles (including a soon-to-be-released novella) to look forward to, coming in rapid order. The novel-length works—excluding the novella and starting with MATAMOROS BULL—will comprise a trilogy called “Storm Season” during which various members of the Rancho Diablo cast will be caught up in adventures that draw them away from the ranch itself.

As followers of the series likely already know, one of its unique features is that the titles to date have been written by three top-notch authors—James Reasoner, Bill Crider, and Mel Odom—all sharing the “Colby Jackson” byline and contributing different entries. This time around (as well as for the aforementioned novella and all of the “Storm Season” trilogy) it is Mr. Odom behind the curtain and, as already mentioned, he turns in a bravura performance.

Although many of the Flying D regulars we are familiar with from past adventures (Sam Blaylock, boss of the ranch and patriarch of the Blaylock family; Mike Tucker, his long time friend and right hand man; Gaby Darbins, another old friend and chuck wagon cook, etc.) are present here, it is Sam's youngest son Elijah who takes center stage for most of MATAMOROS BULL. He is a fifteen-year-old boy accompanying his father and a handful of wranglers on a trip into Old Mexico to buy a special breeding bull for the ranch. The adventures he experiences—both as part of the ranch outfit and, more importantly, when separated from the others—is a coming of age tale that is exciting, sometimes humorous, often dangerous, at times poignant, and plays out at a breakneck pace. Much of what Elijah has to deal with revolves around protecting his father's prize bull and trying to come to grips with his personal feelings for the lovely, sassy, ever challenging Ofelia—a young Mexican beauty he meets down in Mexico.
In a matter of only a few event-filled days, Elijah transitions from boy to man—in the eyes of himself and many others—before this tale is done, and makes his mark as a character we will be wanting to see more of in future Rancho Diablo tales. But, at the same time, author Jackson/Odom leaves Sam Blaylock and most of the rest of his crew in a cliff-hanger of a situation that will make readers count the minutes until we see what befalls them in the next episode, tentatively titled GHOST TOWN GUNDOWN