A SOLDIER'S NIGHT BEFORE CHRISTMAS 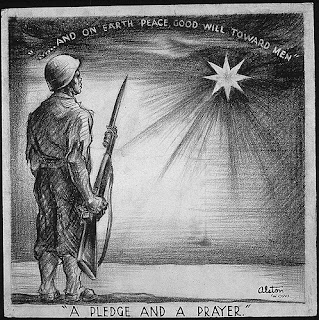 Yesterday I posted a humorous Christmas poem. In searching for the words to that poem (“Jest 'Fore Christmas”) I ran across this one and, needless to say, it moved me. So I thought I would share it, too. It's listed under a couple different titles, but “A Soldier's Night Before Christmas” seems to be the most common, and the one I prefer. There are versions applicable to the different branches of our Armed Services, but the core message is the same. Also, there seems to be some controversy as to who exactly wrote the original version (ranging from a soldier in Okinawa to one in Korea to one stationed in Washington D.C.). So I won't apply a byline – if you're interested, you can check it out on the web (Snopes gives a pretty thorough rundown).

The main thing is to read it and, hopefully, give it some thought. Then, while you're counting your blessings this Christmas season, be sure to remember the brave men and women who have fought over the past decades and centuries to give us the freedom to have these blessings.

Remember: If you're able to read this, thank a teacher; if you're reading it in English, thank a soldier.

A SOLDIER'S NIGHT BEFORE CHRISTMAS

Twas the night before Christmas, he lived all alone,
In a one bedroom house made of plaster & stone.
I had come down the chimney with presents to give
And to see just who in this home did live.

I looked all about a strange sight I did see,
No tinsel, no presents, not even a tree.
No stocking by the fire, just boots filled with sand,
On the wall hung pictures of far distant lands.

With medals and badges, awards of all kind
A sober thought came through my mind.
For this house was different, so dark and dreary,
I knew I had found the home of a soldier, once I could see clearly.

I heard stories about them, I had to see more
So I walked down the hall and pushed open the door.
And there he lay sleeping silent alone,
Curled up on the floor in his one bedroom home.

His face so gentle, his room in such disorder,
Not how I pictured a United States soldier.
Was this the hero of whom I’d just read?
Curled up in his poncho, a floor for his bed?

His head was clean shaven, his weathered face tan,
I soon understood this was more than a man.
For I realized the families that I saw that night
Owed their lives to these men who were willing to fight.

Soon ‘round the world, the children would play,
And grownups would celebrate on a bright Christmas day.
They all enjoyed freedom each month of the year,
Because of soldiers like this one lying here.

I couldn’t help wonder how many lay alone
On a cold Christmas Eve in a land far from home.
Just the very thought brought a tear to my eye,
I dropped to my knees and started to cry.

The soldier awakened and I heard a rough voice,
“Santa don’t cry, this life is my choice;
I fight for freedom, I don’t ask for more,
my life is my God, my country, my Corps.”

With that he rolled over and drifted off into sleep,
I couldn’t control it, I continued to weep.
I watched him for hours, so silent and still,
I noticed he shivered from the cold night’s chill.

So I took off my jacket, the one made of red,
And I covered this Soldier from his toes to his head.
And I put on his T-shirt of gray and black,
With an eagle and an Army patch embroidered on back.

And although it barely fit me, I began to swell with pride,
And for a shining moment, I was United States Army deep inside.
I didn’t want to leave him on that cold dark night,
This guardian of honor so willing to fight.

Then the soldier rolled over, whispered with a voice so clean and pure,
“Carry on Santa, it’s Christmas Day, all is secure.”
One look at my watch, and I knew he was right,
Merry Christmas my friend, and to all a good night! 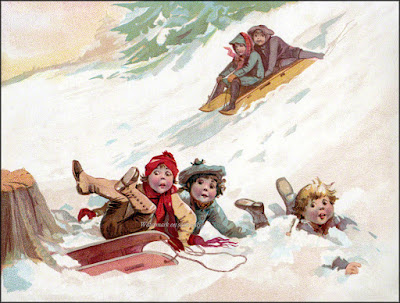 Not to reveal too much about my age, but many years back, when I was in 3rd or 4th grde, I attended a one-room school (actually, I went to two different ones in the course of the many schools I attended growing up – thanks to my dad's wanderlust and his constant search for a better job). The teacher at this particular school—I think her name might have been Mrs. Kildow but I can't remember for certain—used to read to us frequently. One of her favorites was the following Christmas poem. It was one of my favorites, too, and has stuck with me all these years. It came to mind the other day (as stray thoughts often do to old codgers) so I thought I'd see if I could find the exact wording on the Internet ... and by golly there it was.
After all these years I still had myself a chuckle or two reading through it again. It speaks of a simpler, sweeter time and of values (even naughty ones) I think everybody could use a dose of in this day and age.
Thinking ya'll might get a kick out of it, too, here—from the late 1800s, as written by Eugene Filed—is:

Father calls me William, sister calls me Will,
Mother calls me Willie but the fellers call me Bill!
Mighty glad I ain't a girl---ruther be a boy,
Without them sashes curls an' things that's worn by Fauntleroy!
Love to chawnk green apples an' go swimmin' in the lake--
Hate to take the castor-ile they give for belly-ache!
'Most all the time, the whole year round, there ain't no flies on me,But jest 'fore Christmas I'm as good as I kin be!

Got a yeller dog named Sport, sic him on the cat.
First thing she knows she doesn't know where she is at!
Got a clipper sled, an' when us kids goes out to slide,
'Long comes the grocery cart, an' we all hook a ride!
But sometimes when the grocery man is worrited an' cross,
He reaches at us with his whip, an' larrups up his hoss,
An' then I laff an' holler, "Oh, ye never teched me!"But jest 'fore Christmas I'm as good as I kin be!

Gran'ma says she hopes that when I git to be a man,
I'll be a missionarer like her oldest brother, Dan,
As was et up by the cannibals that live in Ceylon's Isle,
Where every prospeck pleases, an' only man is vile!
But gran'ma she has never been to see a Wild West show,
Nor read the life of Daniel Boone, or else I guess she'd know
That Buff'lo Bill an' cowboys is good enough for me!Excep' jest 'fore Christmas, when I'm as good as I kin be!

And then old Sport he hangs around, so solemn-like an' still,
His eyes they seem a-sayin': "What's the matter, little Bill?"
The old cat sneaks down off her perch an' wonders what's become
Of them two enemies of hern that used to make things hum!
But I am so perlite an' tend so earnestly to biz,
That mother says to father: "How improved our Willie is!"
But father, havin' been a boy hisself, suspicions meWhen, jest 'fore Christmas, I'm as good as I kin be!

For Christmas, with its lots an' lots of candies, cakes an' toys,
Was made, they say, for proper kids an' not for naughty boys;
So wash yer face an' bresh yer hair, an' mind yer p's and q's,
And don't bust out yer pantaloons, and don't wear out yer shoes;
Say "Yessum" to the ladies, and "Yessur" to the men,
An' when they's company, don'a pass yer plate for pie again;
But, thinkin' of the things yer'd like to see upon that tree,Jest 'fore Christmas be as good as yer kin be!