Noteworthy Reads: NO TORRENT LIKE GREED by C.J. Henderson 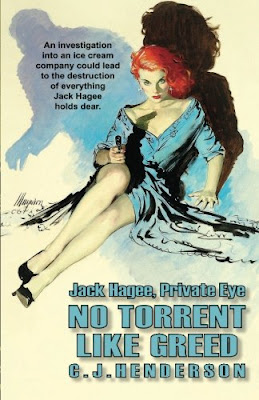 Late last week, I had the rare experience of receiving a nice surprise—make that two very nice surprises—in the mail.
For starters, there was a book. Always a good thing. But upon delving into it, I found it was quite a special book … a brand new, never-before-published novel-length Jack Hagee mystery thriller—NO TORRENT LIKE GREED—by my old pal C.J. Henderson!

As has been previously covered here, we sadly lost Chris just short of a year ago (July 4, 2014) when that evil beast cancer claimed him as another victim.

For many, Chris was probably a bit better known for his horror/supernatural tales, mostly in the Lovecraft vein and also several Kolchak-Night Stalker tie-ins. But I knew him first and best through his hardboiled crime books and stories featuring Jack Hagee, PI. (Although Chris was famous for saying that “everything” he wrote was hardboiled – a sentiment I myself have echoed in regard to my own writing.)

After I had the privilege of introducing Hagee to readers via a short story entitled “What You Pay For” within the pages of my small-press magazine, Hardboiled, he went on to make many more appearances over the years. But there were only three Hagee novels, the last being NOTHING LASTS FOREVER in 1994. At least none that I (nor hardly anyone else) knew about. However, a mutual friend, John L. French, did. Chris had written TORRENT back in the early/mid-nineties, when Berkley was publishing the first three, and had sent a manuscript copy to John. When Berkley decided to discontinue the series, TORRENT went on the shelf and remained largely forgotten until John recently came across his copy once again.
John promptly went to work on editing the manuscript and simultaneously making arrangements with Rich Harvey at Bold Venture Press to get the work published … the result being NO TORRENT LIKE GREED, fresh off the presses for May of 2015; though it’s vintage 1994 (taking place immediately following the events of NOTHING LASTS FOREVER). It’s also vintage Henderson/Hagee with all the grit, energy, and action readers know to expect from that pairing of byline and protagonist. As the jacket blurb promises: “What follows involves Jack and his friends with the Feds, the Russians, and an organization capable of blowing New York City off the map!”

All of this is available now as a nicely done trade paperback from Bold Venture, with an eye-catching Robert Maguire cover and an informative, heartfelt Introduction by Gary Lovisi.

Last but not least, it also features the following dedication, which warms my heart and puts a lump in my throat:
“To Wayne Dundee and Gary Lovisi – who knew a good thing when they saw it and shared it with the rest of the world.
On behalf of C.J. and all of his fans –
Thanks, guys
John L. French”
To which I can only say, for my part … the pleasure was all mine.
Posted by wayne d. dundee at 9:44 AM No comments: 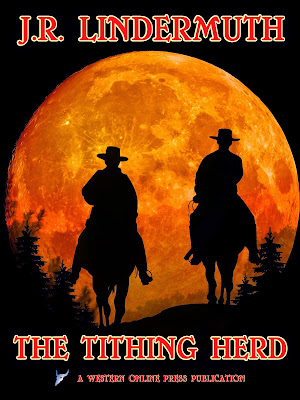 THE TITHING HERD is an ambitious, exciting, multi-layered Western adventure. The title comes from the practice of cash-strapped Mormons, back in the middle and late 1800s, to gather up a herd of cattle to take to market in order to pay their annual tithe to the Church.
At no cost to the momentum of the book, a number of historical Mormon facts such as this are interwoven into the plot and subplots, giving this tale some distinct “learning” aspects that are quite interesting. Make no mistake, however --- there is plenty of action and suspense to propel these facts and all else along at a rate that will keep the reader eagerly turning pages.

At the core of everything is the character of Luther “Lute” Donnelly, a former lawman carrying around a pack of guilt over past deadly events that he feels responsible for allowing to happen. Said events cost him the life of his brother and also cost him the love of his life --- a Mormon widow he was ready to marry but instead ran away from due to his shame. In the interim he has been getting by on money earned from racing his prize horse but otherwise staying out on the edge of things. In his gut, though, he carries a thirst for revenge on the man who killed his brother and in his heart he still carries his love for Serene, the woman he abandoned.
Coming across a young man left double-crossed by some bandits he’d innocently fallen in with serves as a catalyst to draw Lute back into many of the things he’d been on the run from. From the lad, Tom Baskins, he hears the name “Spanish” --- the outlaw leader responsible for the death of Lute’s brother. And then, after taking Tom back to make amends with the rancher (an old friend of Lute’s) he had inadvertently wronged while in bad company, one thing leads to another and Lute suddenly finds himself not only reunited with Serene but also committed to helping her son take their tithing herd to market. Part of this is as a favor to Serene, but perhaps a greater part is that Lute expects Spanish and his gang to try and rustle the herd, thus providing the former lawman the chance he has been waiting for – to once again confront Spanish.

All of this is told in rapidly cutting-back-and-forth scenes involving numerous characters and settings, everything skillfully handled by author Lindermuth’s sure hand. You will find action, adventure, suspense, romance, and even a touch of mysticism --- interlaced with more than a few twists and surprises --- that will leave you cheering for Lute and the rest of the “good guys” and hoping to see more of them.
Strongly recommended
Posted by wayne d. dundee at 8:18 AM No comments: