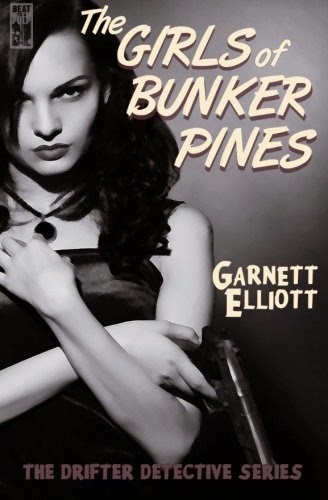 This third entry in the rightfully popular Drifter Detective series is the longest of the tales so far and also shows us a slightly harder edge to PI Jack Laramie. Both of these are for the better. The added length allows author Elliott to more completely flesh out Laramie's background (including some flashback scenes to his time spent as a WWII POW in a Nazi stalag) interwoven into the nicely complex central storyline. The hardboiled side of Jack that presents itself more this time --- although foreshadowed in earlier stories --- is entirely fitting to what he is faced with on this case. Yet neither does he suddenly go ballistic and turn into some kind of reckless avenger. You don't want to back him into a corner but, at the same time, he goes out of his way to avoid tangling with associates of the Dallas Mob (similar to the situation he previously faced in HELL UP IN HOUSTON when he found himself once again faced with going up against the Cajun vice lord, Lameaux).

Just in case you don't know, Jack Laramie is the grandson of Cash Laramie, the deputy U.S. marshal (sometimes known as the "outlaw marshal") --- the creation of David Cranmer (aka Edward A. Grainger) who helms Beat To A Pulp Publishing and also puts out the Jack Laramie stories.
Cash operates out of Cheyenne, Wyoming, in the 1880s; Jack's drifting takes him throughout central and west Texas in the mid 1950s. But in spite of the time and distances separating them, the bloodline link between Jack and his grandpappy has never been more apparent than it is this time around.

To round off this tasty concoction with just the right seasoning, there are some colorful and well-realized secondary characters also involved. Most memorable is Joe Crewes, Jack's stubborn client (sort of), a Marine recently discharged after serving in the Korean conflict. Mix in some shifty con artists, a pair of Burlesque dancers (who call themselves by the unlikely handles of Rosie Tokyo and Eva Brown), a helpful motel operator with aspirations to complete a mail order course and become a licensed PI himself, and the aforementioned mobsters out of Dallas … you've got all the ingredients you need for some very satisfying reading entertainment.
Available now in both Kindle and print format.
Strongly recommended. Don't miss it!
Posted by wayne d. dundee at 5:17 AM

Thanks for the thoughtful review, Wayne. Jack gets angry enough to take action, but he's not so stupid as to take on a bevy of killers all at once.

Nicely reviewed, Wayne. You hit all the right points and draw the same conclusion I have. The writing is brilliant.