Another Look: MY DARLING CLEMENTINE (directed by John Ford, 1946) 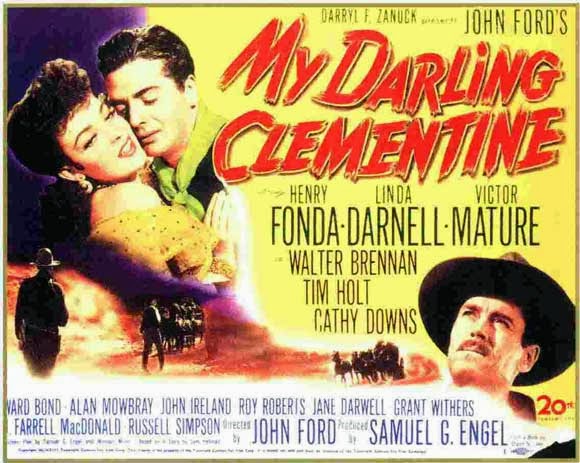 I never write trash reviews. Never. If I sit through a movie or read a book (partially read a book, I should say, inasmuch as I'm not likely to finish one I find lousy enough to be tempted to trash) I keep it to myself. In the end, any review is only one person's opinion. The same is true either way, be it positive or negative. But a positive review is attempting to encourage others to try something they might not otherwise be tempted to check out or even be aware of; a negative one is strictly a matter of discouragement and (often) ridicule. I see a big difference.

Now, having said all that, you probably already see a "BUT" coming, don't you?
Well, sort of …
This look at MY DARLING CLEMENTINE is more a matter of tossing out a general question, along with a few comments, as to Why this film is so widely considered to be one of the greatest Westerns of all time. I've seen it a couple of times in the past, seen bits and pieces of it several more times over the years, and sat through it once again, beginning to end, just two or three days ago.
Yes, it's directed by the legendary John Ford, it features an all-star cast headed by Henry Fonda and Victure Mature (the guy who would be playing Samson for C.B. DeMille in another three years and who was widely considered the premier Hollywood "hunk" of that era – making him the healthiest fucking tuberculosis-riddled Doc Holliday ever), and has all of the famous Ford touches, including being beautifully filmed in Monument Valley. In other words, all of the ingredients were there. Or should have been.
Yet, for me, the whole thing falls flat and barely rates being a decent B-grade "shoot-'em-up", let alone anything approaching a classic. And this is just from the standpoint of storyline logic and acting.
Additionally, there is the horrible mangling of the actual history of the gunfight at the OK Corral, the event which the plot is centered around. To be fair, it is oft-told that Ford got many of his "facts" from Wyatt Earp himself, on silent film sets circa the 1920s --- a point when Earp and his wife were working diligently to "clean up" Earp's image (facts be damned) for the history books and biographies beginning to emerge. 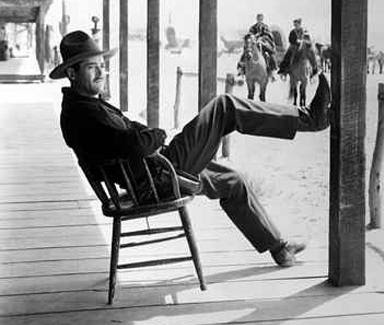 I could go on --- like mentioning the complete and utter dumbness of the title, which has not one whit to do with the film (except for an ill-fitted and meaningless female character by that name) and also totally avoids linking in any way to the famous folk song about a miner's daughter … But this isn't a trash piece, remember?

Having said what I've said, I will close with the sincere question that is truly my main point for writing this piece … What the hell am I missing? Why do so many people I admire (from Roger Ebert to Sam Peckinpah, as just two examples) consider this such a wonderful classic in contrast to the reaction of  little-ol'-me?
I'd really like some feedback … Convince me where I'm wrong … Or (and maybe this is my snarky true intent) let me know if there's anybody out there who agrees with my take.
Posted by wayne d. dundee at 11:02 AM

This would never make my list of great westerns, either. I thought Mature did a pretty job as Doc, though. Dennis Quaid and Val Kilmer were better, but for a guy who was more of a hunk than an actor, Mature stood tall in this one.

Reviews can hardly stop being subjective and I'd have to agree that I've never considered My Darling Clementine anything special, although I do have it on videotape (remember those clunky cassettes?!) and have watched it several times.

Perhaps the stance to take when reviewing anything is first to consider the creator's(s') objectives, his times, and his target audience. If you can figure out what these were, and how close he (she, they) have satisfied them, it is sometimes possible to reach a fairer verdict.

I don't get it either, Wayne. There are much better Ford movies and, definitely, better films about Earp and Doc. Other than Fonda (who was usually good)I'm not even overly impressed with the acting. We must be missing something--but I don't know what it might be.

I watched this movie again just a few days ago. I gave it a 10 out of 10 mainly because of the great acting by the villain Walter Brennan and his gang of cut throat sons. Plus this is one of Henry Fonda's best roles. Also he loses two brothers because Brennan murdered them. Nice shoot out at the OK corral even though not historically correct.

They say this was a remake of FRONTIER MARSHAL starring Randolph Scott, which was a good movie but not on the level of MY DARLING CLEMENTINE.

The IMDB gives it a 7.8 rating which is pretty high.

Ford was in the business of mythologizing history which may be precisely why so many considered him great.

Together with Hitchcock (and Orson Welles to a lesser extent), Ford was most admired by the French New Wave bunch, and everyone they influenced afterwards. They worshiped him as an auteur, primarily for his mise en scene--or telling a subtextual story through visual semiology while still competently telling a consciously-recognized story on top of it. (The New Wave film makers, BTW, did OK at the former but sucked at the latter.)

Two thoughts on the matter come to mind from Ford's own films, BTW. One is from the Cavalry Trilogy you mentioned (Fort Apache, I think) long after the Custeresque Henry Fonda character dies and the John Wayne character is listening to some reporters summarize the government-approved whitewashing of Fonda's legacy.

"Correct in every detail," Wayne says through gritted teeth, knowing full well the truth has been mangled.

Or, as put by another reporter character in what truly was one of Ford's greatest westerns IMO, "When the legend becomes fact, print the legend."

Thanks for the input, both pro and con, everyone.
Bill - You're right, I always liked Vic Mature, too. Although I can't quite buy him as a tuberculosis victim here, he still brings the most emotion and energy (along with Linda Darnell) to this film.
Chap - You make a good point. I always *try* to give some consideration to what I think the director or writer is setting out to do. Maybe my problem is that I'm reacting to the HEAPS of praise foisted on this film by others (100% on Rotten Tomatoes vs. 89% for The Searchers - COME ON!)rather than what Ford was trying for (although I still don't think it's a particularly strong film, by any standard).
John - Agree. Except, as noted above, I think Mature (nowhere the actor Fonda was overall) came off stronger in this one.
Walker - You're right, this *was* a remake of Randolph Scott's FRONTIER MARSHAL, based on a book written by Stuart Lake only a couple of years after Earp's death. He rewrote basically the same story again in another book called 'My Darling Clementine', which Ford bought the rights to. All of Lake's work was heavily influenced by Josephine Earp and eventually became widely recognized for the glaring inaccuracies. The stagecoach showing up at the start of the OK Corral fight came straight from Ford, one of the "facts" told to him by Wyatt himself. As far as Henry Fonda, I have a lot of admiration for his acting talent, but I fail to see it at work here --- but that may be the fault of Ford's direction and the way the role was written. Fonda's Earp seems far too shuffling and folksy, ala YOUNG MR. LINCOLN--- where is the RAGE, for example, over the murder of his brothers (such as we saw from Kurt Russel in TOMBSTONE)? All under the heading of differing tastes, I guess ...
Hank - I'm generally very fond of Ford's mythologizing of the West. Nobody does that better than Pappy, and the two examples you cited from FORT APACHE and THE MAN WHO SHOT LIBERTY VALANCE are cases of him doing it at his best. I could even excuse him all the inaccuracies in CLEMENTINE if I saw evidence that's what he was trying for there as well. But I just don't see it.

It takes some nerve to question received opinion about any John Ford western, and I give you credit for that. The mangling of history has kept me from enthusing about this one, but it was made at a time when myth mattered more than fact to both Hollywood and the audience.

It's meant to be entertaining, and I enjoy the parts that entertain me: Brennan's and Fonda's performances in particular. Darnell and Mature not so much. The cinematography is also notable, though again, it's mythic, not historical.

What's interesting to me about all the Tombstone films is how they represent the unlikely friendship between Earp and Holliday. Following that thread through them makes an illuminating history of its own.

BTW, I, too, am flabbergasted that Clementine could be ranked higher than The Searchers ANYWHERE.

Well, I liked it and have seen it many times. Yes, it's not historically accurate, but the same can be said for just about any movie ever made that was based on real people and/or incidents.