Another Look: THE BAYTOWN OUTLAWS (2012 Movie) 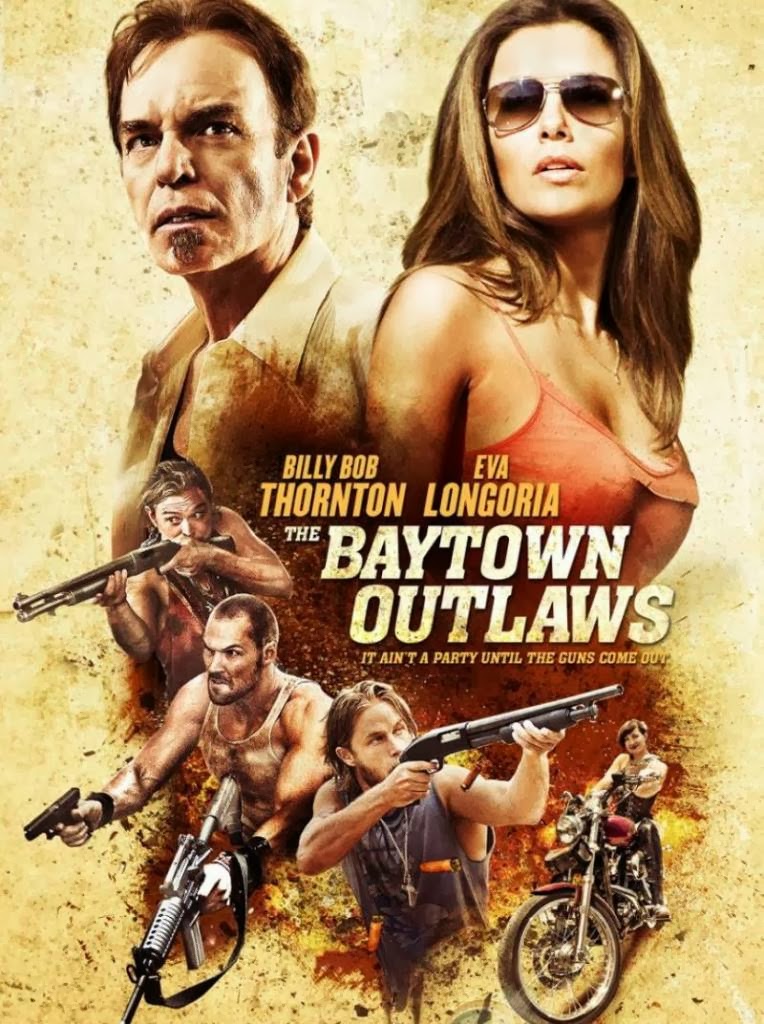 I vaguely recalled hearing the title of this film some time back, in a short interview with one of its stars, Billy Bob Thornton. Billy Bob is an interesting guy (which you can take to mean a whole range of things) who plays quirky, interesting parts in various films. I don't recall exactly what was said about BAYTOWN OUTLAWS in that particular interview, but for some reason the title stuck vaguely in my mind.
Then, one night about a week ago, I was channel surfing, trying to find something that sounded interesting, when BAYTOWN OUTLAWS popped up on the channel guide menu. It was already in progress, abut half way through, but I clicked on anyway just to see what it was about. It was right in the midst of one of its many road-chase action sequences. It took a while to gain some rough idea of what the hell was going on, but it really didn't matter --- I was instantly hooked and knew that, whatever this was, I was caught up in it and enjoying it. I stuck with it the rest of the way through, then immediately did a search to find out when it was next scheduled to play so I could DVR it and watch it again, from the beginning.
I did that last night.
Now to try and review it, to try and capture my impressions and present them in a manner that properly conveys the bizarre, serio-comic, wild-ass, adventure/thriller that played out on the screen before me. In broad strokes, I'll start by saying that director/co-writer Barry Battles clearly has a big Tarantino influence, leaning heavily on PULP FICTION and KILL BILL. Mix in dashes of MAD MAX/ROAD WARRIOR, a pinch or two of DELIVERANCE, a sprinkle of Russ Meyer's FASTER PUSSYCAT, KILL, KILL! and you'll start to get the "flavor" of BAYTOWN OUTLAWS. If none of those sound the least bit intriguing, then head for the hills.
At the center of all this is the Oodie brothers --- Brick, McQueen, and Lincoln --- three tough, reckless, redneck lawbreakers from Alabama. As young orphans, they were taken under the wing of local sheriff Menard (played by Andre Braugher), who has molded them into his own personal band of mercenaries assigned to regularly purge his county of major criminals, thus keeping his county on record as having the lowest reported crime rate in the state. Things start to go off the rail when the Oodies take on a "side job" for a woman (Eva Longoria) who has witnessed one of their "crime purges". She hires them to kidnap her nephew from her ex husband Carlos (played by Billy Bob Thornton), a powerful drug lord based in Texas. Part of the deal is that they're to be sure and kill Carlos. So the Oodies pull off the kidnapping okay (a "smash and grab", as they describe it, complete with lots of smashing and gunplay) but fail to make sure Carlos is dead. That oversight sets into motion Carlos sending team after team of specialized assassins to catch up with the brothers before they can return to Alabama, kill them, and bring back the kid.
The assassin teams include: A bevy of sexy, vicious female dominatrixes on motorcycles; a heavily-armed gang of motorized thugs in an armored, tank-like truck; and a band of quasi-American Indians packing firepower, bows and arrows, and scalping knives.
In case you don't get the idea, the action is over-the-top, complete with blood and bullets flying everywhere, expletive-laden banter amongst the brothers and spewing almost constantly from the mouth of scenery-chewing Thornton, all told at a pace that seems never to let up. Yet there are a few quieter moments where some measures of poignancy and character depth are allowed to peek through.
Thornton, Longoria, and Braugher are the better-known names touted as being the "leads" in this picture. And each has his or her moments. But most of the screen time belongs to the three lesser known actors playing the Oodie brothers and they deliver with a freshness and energy that make them very watchable (even though you may be shocked or grossed out by some of their actions).
All in all, I had a lot of fun with this movie and I think you may too. Probably not worth the full-blown price of a theater ticket package (if it ever even played in the theaters), but on cable or as a reasonably-priced DVD, it's well worth an hour and a half of your time.
Posted by wayne d. dundee at 7:43 AM

Inclined to agree with your assessment, Wayne. We must have been watching the film at about the same time. My son saw it earlier and recommended it to me because he knows I'm a fan of both Thorton and Braugher.