SOMETIMES YOU GET THE BEAR ... 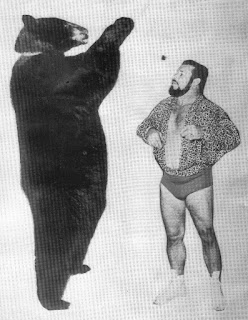 A couple or so months ago, David Cranmer told the story on his blog (Education of a Pulp Writer – http://davidcranmer.blgospot.com) about briefly encountering a wild bear during a camping trip. He then asked if anyone else had any bear-encounter stories and I responded that, while I'd never run across one in the wild, I had wrestled one once upon a time when I was young and obviously lacking in good sense. It got a couple follow-up comments and I figured that was that.

Now, after my recent interview with writer/mixed martial arts competitor/strongman contestant Thomas Pluck, the subject popped up again when Zak Mucha commented on a Facebook posting about the interview that Thomas and I looked like a couple guys who could and would wrestle a carnival bear for the right cause.

So what the heck … I'm going to share my bear-wrestling story.
The year was either 1976 or '77. I wasn't yet 30. I had recently made 2nd Shift foreman at the factory where I worked. So, having not yet gotten softened up by a desk job, I was still in pretty good shape. 6'1", about 260-265, strong upper body and even fairly agile for a big guy. Hardly slim and trim, but still carrying it pretty good—managing to keep my shoulders wider than my ass, as they say.
The Cherryvale Shopping Mall, just outside of nearby Rockford, where I lived, was the second largest indoor mall in the state at that time and at its center there was a large sunken arena where they held various publicity events throughout the year. The area all around the arena was open so crowds could gather and observe whatever was taking place; above, on the second level, more people could stand at surrounding railings and look down. In other words, it was sort of like a scaled-down coliseum.
One such event they decided to hold (I don't remember to promote what) was a 3-day appearance by Victor the Wrestling Bear. Victor was an Alaskan brown bear, although actually more black in color, owned and trained by a former pro wrestler and alligator wrangler named Tuffy Truesdale. They toured the country putting on their show at fairs, other malls, grand openings, etc., and every so often showed up on AWA Wrestling where Victor would raise hell with one of the popular bad guys of the moment who was wreaking havoc on the babyfaces. At Cheryvale, they put on two or three shows a day during which Victor would roughhouse with Tuffy a little bit, then do some tricks like riding a bike and bouncing some balls, drink copious amounts of soda pop from a bottle, etc. And then, for the big finale, Victor would wrestle volunteers from the audience—five matches per show. 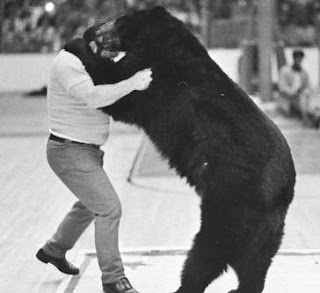 So there's my bear-wrestling tale. In the 1980s, various animal rights groups effectively stopped public bear wrestling. Tuffy and Victor returned to Florida where Victor became pretty much just another display animal in a cage and Tuffy went back to wrangling gators. They've both since passed away. You can Google "Victor the Wrestling Bear" and find a handful of articles, some pictures, and even a few old videos of Victor in action.
But I don't need videos … or pictures either, for that matter.
I saw ol' Vic in action. First hand. And I remember it just fine.

That is one of the most awesome stories I've heard in a loooong time.

I heard that story a million years ago. I say "story" advisedly -- if you ever met Big Wayne, you wouldn't doubt that he was more than tough enough to try it, and with Pam in the audience, I'm sure he'd have taken on Mighty Joe Young without hesitation. The only part that has ... shall we say ... morphed a bit is that, in the original version (which I heard in '87 or so), Wayne was still claiming he'd been victimized by an illegal head-butt from Victor just when he had that bear right where he wanted him.

That story is pure greatness.

Wayne, that's a hell of a story. I've sparred with Keigo Kunihara (who fought in UFC 55) but you've got me beat! Keigo cracked my rib by accident.
Looks like we both don't know any better...
And for the record, Mighty Joe Young is one of my favorite old movies. I need to watch it again.

The loss included net charges of $117 million related to the falling value of its fuel-hedging positions. Without the charges, Southwest would have earned $61 million, or 8 cents per share, which beat expectations of analysts surveyed by Thomson Reuters, who forecast a gain of 5 cents per share excluding special items.

I worked at Aqua Circus in Wildwood New Jersey in 1974 and Victor was there but his trainer at that time was George Allen .I have so many great memories of Victor. if we didn't have people to take him on I would go up and the platform was right at the pool so he would throw me into the water ,the crowd love it !He always liked sharing my Pizza with me lol one of the scariest times was when he got scared from all the camera light flashing he ran down the steps to the street and we chased him for 2 blocks the look on peoples faces when you see a bear running past you down the shore was priceless lol The one thing I learned the hard way was never pull on his muzzle when you were wrestling him he would beat on your chest with his nose !

My dad wrestled Victor in Detroit, I was maybe 5 or 6 and was invited onstage to give him a bottle of Vernors. Sure wish there were pictures!