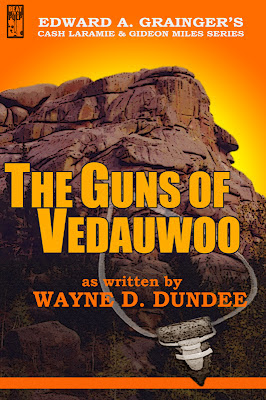 Funny, sometimes, how a writer pulls together bits and pieces of different things floating around in the Imagination part of his brain and forms them into a story or novel. At least that's the way it works for me. Sometimes the pieces are there right when I reach for them, other times they are more elusive. And then there are times when one or two of those floating pieces will clunk together more or less on their own and make enough noise to sort of demand some attention be paid them.

That's how it was with THE GUNS OF VEDAUWOO. I had enjoyed using Edward A. Grainger's popular Cash Laramie character for the short novel, MANHUNTER'S MOUNTAIN, which came out earlier this year, and knew I wanted to do another. But I didn't quite have a "hook" or storyline to wrap something around.
At the same time, the notion of using the historical events surrounding the Ghost Dance movement (late 1880s) had been rattling around for a long time in that empty space between my ears as the possible basis for a good yarn. Yet I still hadn't thought of connecting them to a Cash story.
But then, a few months back, my pal Richard Prosch—over on his Meridian Bridge blog—posted some photos and a short article about the Vedauwoo Rocks in eastern Wyoming, between Cheyenne and Laramie. Both the photos and the name immediately intrigued me and I instantly knew there was a story there—or, at least, there sure as hell ought to be. THE GUNS OF VEDAUWOO! The title leaped to mind. I had no idea what it meant or what it would involve, but I knew it was darn well going to be my title.
Then the floating pieces started to pull together. A Cash Laramie adventure … Vedauwoo was practically right in Cash's back yard. Upon doing some reading and research about Vedauwoo I learned it was considered a very spiritual place by Indian tribes, including the Arapaho (the tribe Cash had grown up with). Ah, and the Ghost Dance was a very spiritual movement … I learned that an offshoot of the largely peaceful Ghost Dance movement was something a little more aggressive called the Ghost Shirt belief, having followers who thought they possessed garments that could "turn away the white man's bullets" … Bullets came from guns … and so on and so on, until I had a rough mental sketch of how THE GUNS OF VEDAUWOO was going to take shape.

Only three things remained to be taken care of before I forged ahead. First, I contacted Richard Prosch to make sure I wouldn't be infringing on anything he might already have cooking if I used Vedauwoo as a setting for my tale. He told me to go for it. Then I checked with David Cranmer (who handles all of Edward A. Grainger's behind-the scenes affairs) to make sure he was okay with me doing another Cash Laramie. He told me to go for it. And, finally, I had to make a trip to Vedauwoo to get my own feel and sense of the place in order to try and do a decent job of capturing and presenting it to my readers.
The jury is still out on how well I succeeded with that.
I hope readers give THE GUNS OF VEDAUWOO a try; if they do, I think they'll like it.

In the meantime, as always …

I always get a kick outta hearing how a story comes together. Glad I could figure in a small way into one of yours!