It started out with my oldest grandson and I going to see the Clint Eastwood movie, Trouble With The Curve. Liked the movie a lot. It's in the vein of Grand Torino, with Eastwood playing a widower again, this time a grouchy, stubbornly old-school baseball scout suffering from failing eyesight. 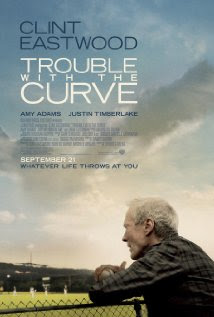 Before his sight problems fail him completely(and reveal him to the ball club's higher-ups just as his contract is coming due), Clint is assigned to assess a hotshot batter who is in contention for a number one draft pick. Through some mildly far-fetched plot mechanisms, his estranged daughter, now a high-powered attorney on the brink of making partner at her law firm, takes leave to accompany him for a few days in order to find out the truth about his condition and to try and patch up their sketchy relationship.
There are few surprises in the predictable storyline (young romance, betrayal, ultimate retribution) but the whole thing is nevertheless quite satisfying and superbly acted (especially by Amy Adams, as Clint's daughter). Our local little theater has a $4 Tuesday matinee—all ages, all movies—so it was sure as hell worth that and good enough so that I don't think I would have squawked too much even at a higher price at a bigger venue.

After the movie, Bill and I drove out to the lake to a bar we frequent called the Sand's Edge. I'm past my drinking prime and Bill is still too young, so we go there for their burger menu. If you don't know about bar burgers … well, I feel sorry for you but I won't go into a long dissertation on what you're missing. 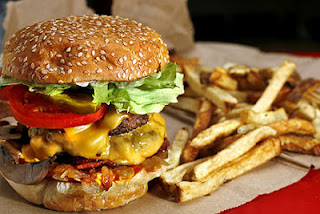 Suffice to say that bar burgers tend to be the best eatin' you're apt to find anywhere you go. We've tried a few different ones off the Sand's Edge menu but the one we currently prefer is the Cowboy Burger—a 1/3 lb patty, topped with cheese, bacon, and a fat onion ring all pressed between two toasted buns. You can get it with barbecue sauce but we both opt out of that. Far as I'm concerned, barbecue sauce in most instances is like ketchup—it's for hiding cooking mistakes, not really for enhancing the flavor.
But I digress …

So the movie and the burgers were great.
Now for the quasi-weird part: Seated at the bar when we got there were six or eight laborer-type guys. Bill and I took seats at one of the little tables off to one side. I'm not sure if the guys were construction workers or railroaders or what. They weren't ranchers, I'm pretty sure of that. This was about four o'clock in the afternoon and it was a little rainy outside, but mostly only a faint mist. Maybe these guys were done for the day, maybe the rain (such as it was) caused them to knock off early. I got the impression they sort of knew one another, but weren't necessarily all from the same crew.
Anyway, back-to-back rerun episodes of Friends were playing on the TV behind the bar and these guys—all of these guys—were intently watching them. There was a bit of conversation here and there, but for the most part they were locked on Ross, Rachel, Joey and the gang. And there was one guy who had a laugh like a cross between Horschack (sic?) from the old Welcome Back Kotter show and a sick mule. First he'd repeat the punch line and then he'd cut loose with "Neeyah … Neeyah … Neyah-ha-ha!" The others would laugh, too, but this guy out-brayed the whole bunch. 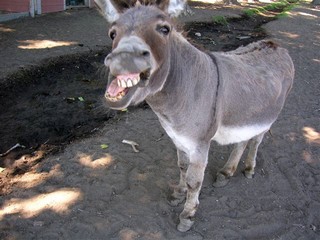 It was the damnedest thing I ever saw. These sorta gritty-looking, outdoor-labor types so completely transfixed by Friends— and Donkey Laugh square in their midst honking his ass off.
I'm half tempted to go back again today just to see if that bunch congregates daily. But if they do, then I'd have to listen to "Neeyah … Neeyah … Neeyah-ha-ha!" some more and I don't know if I could take it.
It might even be catching …

I was wondering how you were going to get all of that into one essay, but, boy, you sure did! About the most entertaining thing I've read this week. I might give CURVE a try if I ever finish this massive oater I'm writing and just won't end!

As far as the burgers go, I don't think you can find any in Fort Collins. Red Robin is okay, but not like what you're talking about. My wife and I used to get the best burgers I've ever had at a little bar up on the Hi-Line in Montana, a ghost town called Cleveland. They were a buck a piece on Thursday nights in the fall. It was a hell of a drive on twisting gravel roads through the Bear Paws, but we made the trip often, and I'm glad we did. Great memories. The old cowboys were a lot of fun to listen to.

Great post. I have something similar coming up later this morning, but in my defense, it was scheduled long before I read this, so I didn't swipe the idea!

That's one fine looking burger!
Ha, the stuff about Friends cracked me up. It's one of those shows I never liked much, but everyone loves it. Maybe it's from growing up close to New York and not getting the whole "make it big in NY" vibe that some other folks have.

Haven't had a real bar burger in quite a spell, so your post reminds me I'm overdue. Gina and I used to have bar hot-dogs at a place in Blair, Nebraska called George's. ("George Dogs") Same idea - lots of onions and cheese. I'm with Thomas on FRIENDS --the irony of the scene has Dundee Short Story all over it, yes?