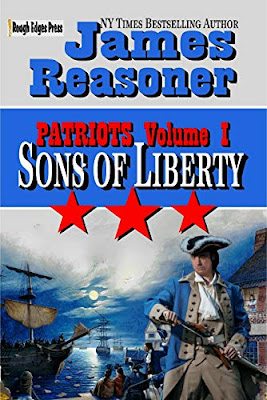 Back in the 1992 – 94 time period, under the pen name Adam Rutledge, James Reasoner wrote a six-volume series of books for Bantam entitled THE PATRIOTS. As the over-arcing title suggests, these stories are set during the Revolutionary War years when young America rose up and won independence from England.
Starting in 1773 with the arrival of young Daniel Reed from Virginia to attend law school in Boston, the series follows Daniel as its central protagonist through the early years of unrest, into open rebellion and battle, and ultimately victory and freedom for the thirteen colonies. Along the way there is romance, intrigue, betrayal, courage, tragedy, and plenty of high adventure! Historical figures and events and even a few memorable dates are mixed in flawlessly and it all comes alive—the sights and sounds and feel of the times.
The individual titles of the six volumes are stirring in and of themselves: The Sons of Liberty; Rebel Guns; The Turncoat; Life and Liberty; Cannon's Call; and Stars and Stripes. In the sure hands of author Reasoner, these titles become filled with memorable characters and exciting twists and turns that will keep readers turning pages feverishly to see what happens next. Yeah, we all know what the final outcome is. But how it is woven around James's wonderful cast of characters—how invested readers will have become in them, and what impact everything has on each of them before the wrap-up—that is what keeps one hooked.
On October 15, all six volumes of THE REBELS will be re-released by Rough Edges Press. These have been revised by James (with able assistance from his wife, Livia) and are as fine a set of historically-themed adventures as you're likely to find. Having them available all at once (for a “binge” read, if you will) is exciting news. As a real sweetener to that already sweet deal, consider this: For one day only (the 10/15 release date) the six volumes will be available for only 99 cents each. After that, volumes 2 through 6 will be priced at $2.99 (still a heck of a deal). 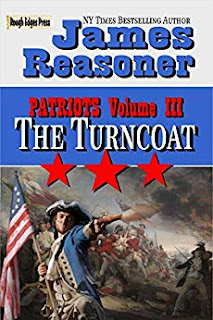 I've seen/heard it claimed more than once that, as entertainment (movies, TV, books, etc.), the Revolutionary War period generally does not draw a lot of interest. I don't know how accurate that is. Thinking about it, I guess I'd have to admit that, when I look back over my own reading/viewing habits, I can't recall occupying my own time with much from that era, either. Using this body of work by Jams as a baseline, I find myself now inclined to check out more of the same ... Realizing, of course, not every writer is as capable as James Reasoner (applicable to any genre he writes in). So anyone reading this who suffers the slightest reservation, for whatever reason, about delving into material about this period—I suggest you overcome it in a hurry, and start with THE PATRIOTS!
You won't be sorry. Highly recommended.
Posted by wayne d. dundee at 9:37 PM

Thanks for posting. Can't wait to reread this terrific series.

Users of the Instagram app have recently begun to experience a bug while attempting to add photos to their feed. When a user posts a picture, it appears in their feed for about 10 seconds before disappearing without warning. When a user's post is deleted from Instagram, they usually get a pop-up message explaining why it was removed. “We deleted your post because it did not meet our group guidelines,” says the most popular notification. Within one day, you can follow our steps and be back on my Instagram feed sharing videos and pictures. If you are still having trouble posting on Instagram after following this guide. I will try to respond and help you as soon as possible, contact us via Bellen Instagram Klantenservice.