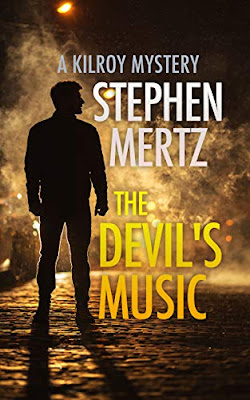 About a third of the way through 2018, Steve Mertz turned his considerable writing talents back to the private genre, where he first began with SOME DIE HARD circa 1979. Since then, of course, his byline has become widely recognized and acclaimed in the field of Men's Action, notably penning what many consider some of the best entries in Don Pendleton's hugely popular Mack Bolan, Executioner series. Steve also created his own successful Mark Stone, MIA series and has additionally done praiseworthy work in the categories of horror, thriller, Western, and stand-alone mysteries.
But the circle was closed in 2018 with the release of two hardboiled private eye mysteries. One was SAY IT WAS MURDER, featuring contemporary, Southwest-based McShan (more on that at another time). The other was COLD IN THE GRAVE, featuring Denver-based Kilroy and set in the 1970s (covered on this blog in May of '18). Both PIs were engaging and distinct, and both books were totally satisfying. I, for one, was anxiously hoping we would be seeing a lot more of both. 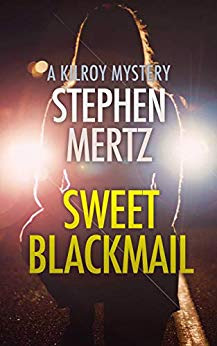 Well, earlier this year, at least part of that wish was fulfilled. In January, Wolfpack Publishing released the second and third entries in the Kilroy series – THE DEVIL'S MUSIC and SWEET BLACKMAIL. Kilroy was (is) back! And these latest titles are just as entertaining and satisfying as his initial appearance. “A tough private eye who wears his heart on his sleeve and a .44 Colt in his shoulder holster!” proclaims the cover blurbs for each. And that's a fair enough thumbnail sketch of the single-monickered Kilroy, a bearded, long-haired, quasi-laid back Vietnam vet who doesn't go looking for trouble (except other people's, the kind he can try to help them out of) yet is plenty capable of handling any that comes his way.
THE DEVIL'S MUSIC may be the best (or at least my favorite) Kilroy so far. It involves an old blues singer attempting to make a comeback after being missing (and presumed dead, by many) for several years. When it becomes evident there are forces at work who don't want this comeback to take place, even to the point of making the artist's presumed death a fact, Kiloy steps aboard both to protect him and to try and get to the bottom of who's out to get him. The mystery element is solid and the suspects and other characters are colorful and well drawn. What gives DEVIL'S MUSIC something extra, though, is the blues music background that the author is so obviously fond of and captures so accurately and lovingly. A musician himself, Steve has written other acclaimed works with a music background (HANK AND MUDDY, JIMI AFTER MIDNIGHT) and his deep appreciation for the music and those who live it also shone through – as it does here.
SWEET BLACKMAIL starts out with one of the niftiest, most reader-grabbing sequences I've come across in a long time: A mysterious woman walks into a restaurant where Kilroy is eating, throws an envelope full of money down in front of him, declaring that's all the money he's going to get and she knew how to play rough, too, if she had to. To emphasize the point, she then pulls out a .22 and fires a few shots in the air before turning and departing. When Kilroy attempts to give chase, he collides wih another customer just entering the restaurant. This slows Kilroy down enough to miss catching up with the mystery woman and when he returns to the diner, he finds the man he bumped into lying dead with a knife wound in his back ... Now, is anybody going to tell me you wouldn't keep reading after that? Naturally, you would. And what you would then enter into is a twisty tale of blackmail (obviously, as stated by the title), mistaken identity, betrayal, more killing, some sexy distraction, and various other obstacles for Kilroy to overcome, not the least of which is DA Dickensheets who longs for any chance to yank the private eye's license. In the end, of course, Kilroy figures it all out and keeps his license for the sake, hopefully, of showing up in more adventures.
The final verdict on this fine series is that it ranks right up there with some of the best in the genre. Kilroy is an engaging protagonist, Mertz's writing is straightforward and sharp – painting vivid action scenes, offering poignant insight, and capturing all the right details for Denver, circa the 1970s. If you're a fan of hardboiled PI tales with clever mystery twists told against a somewhat different setting, don't miss these. Strongly recommended.
Posted by wayne d. dundee at 12:05 AM

Unfortunately , Devils Music is marred by anachronistic howlers such as crack houses in the 1970s and CDs are n the 1960s.

Stephen Mertz is an American fiction author who is best known for his mainstream thrillers and novels of suspense. His work covers a wide variety of styles from paranormal dark suspense (Night Wind and Devil Creek) to historical speculative thrillers (Blood Red Sun) and hardboiled noir (Fade to Tomorrow).

His novels have been well-received critically. Booklist called Nightwind, “fast-paced...a white-knuckle read.” Ellery Queen's Mystery Magazine labeled Mertz, “an action specialist.”[citation needed] Edgar-winner Joe R. Lansdale supplies this career assessment: “Stephen Mertz writes a hard-edged, fast-paced thriller for those who like their tales straight and sharp and full of dark surprise,” while Booklist had this to say about The Korean Intercept: "Fans of political thrillers will relish this high-action tale. An adrenaline rush!” Ed Gorman wrote, “Stephen Mertz just keeps on getting better, each novel more dazzling in story and style.”

Mertz is also a popular lecturer on the craft of writing and has appeared as a guest speaker before writer's groups and at universities. Early in his career, he was a prolific writer of paperback originals under a variety of pseudonyms. His work on Don Pendleton's Mack Bolan series is regarded by fans as some of the best in that series. He also created the Mark Stone: MIA Hunter and Cody's Army series, written under the pseudonyms Jack Buchanan and Jim Case respectively.
-----------------------------------
Bellen Skype Klantenservice