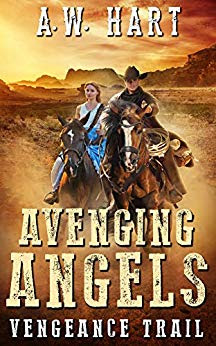 Here is the Amazon review I submitted for the kick-off volume in this exciting new series from Wolfpack Publishing:

In this opening entry to a projected series, twins Sara and Reno Bass are orphaned when a horde of crazed ex Confederates sweep through their quiet Kansas community and leave a wake of bloody devastation behind. Among the victims are the twins' entire family—father, mother, and siblings. Before he dies, their father—a deeply religious man steeped in Old Testament beliefs—implores Reno and Sara to go forth and not only avenge their family but to continue on and also seek out and rid the West of others who kill and terrorize in the name of the Devil.
Directed to an old friend of their father's, from back in his wild days before he found the Lord and settled down to raise a family, the twins are trained in the ways of weaponry and other skills they will need to first merely survive on the post-War frontier ... and then to succeed in their mission to hunt down and deliver vengeance to the ruthless pack who shattered their lives. Their encounters as they ride toward this end—the colorful, often deadly people they meet, the blazing gun battles, the quiet moments where brother and sister strengthen their bond with each other and with the Lord as found in their father's Bible that they carry with them—are by turns thrilling and poignant and wonderfully told. The climax is exciting and satisfying and the trail left open ahead for the twins to continue traveling is bound to quicken any reader's pulse for the sake of wanting more ...
Pounding the keyboard behind the A.W. Hart byline in this instance is none other than series co-founder and prolific Western author Peter Brandvold. Known for his distinctive brand of wordslinging when it comes to fast-paced, thundering Western adventure, Mean Pete scores another winner in this terrific debut novel in what is sure to be a popular,long-running series. Strongly recommended.

And now, as the late, lamented Paul Harvey used to say, here is the rest of (or, at least, more of) the story:

The Avenging Angels concept was co-created by Mean Pete Brandvold and Mike Bray, President and CEO of Wolfpack Publishing. The way Pete tells it, it went something like this—“Mike called me up one day and asked if I was up for developing a series that would run for ten books and beyond and would be written by a string of ghost writers writing under a house name. He wanted me to write the bible as well as the first volume. He said, 'I'd like to have a God-fearing teenage brother and sister in it as well as a dog. Sort of a coming of age story. You can't shoot the dog!' … I said heck yeah, it will keep me out of the bars and away from the floozies. And mean as Mean Pete is, everybody knows I'd never shoot the dog—humans aplenty, but not the dog.” 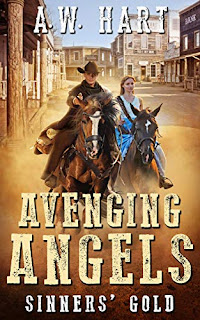 After that, Paul Bishop was brought aboard as managing editor and from there the rest is … well, not exactly history, I guess; at least not yet. But it's certainly well under way with the well-received VENGEANCE TRAIL as Volume One and more soon to follow.

Full disclosure, I was honored and fortunate to have been invited to participate fairly early on and my first entry—the second in the series, titled SINNERS' GOLD—is due to come out next week, October 22.
Going forward, a number of additional writers—solid veterans all—are now lined up with titles to be released monthly. The sequence presently in place is as follows: DAY OF CALAMITY by Richard Prosch; HEAVEN'S BOUNTY by David Foster; SOLOMON'S MINE by Chuck Dixon; BRAND OF THE DAMNED by, uh, me again; GUNS OF LEGION by that Prosch guy; and THE WINE OF VIOLENCE by Charles Gramlich. Additional writers on tap to provide more titles include Ben Boulden, Jason Chirevas, and Lee Lofland.

With editor Bishop ramrodding an outfit manned by this crew of word wranglers, I think readers wanting exciting, fast-paced Westerns have got good cause to look forward to what's coming down the trail.
Be sure to keep a sharp eye peeled for the Avenging Angels.
You won't be disappointed.

Sweet. My entry is nearly complete

Text boxes will give your document a more exciting and professional appearance. As a result, you should incorporate text boxes and graphics into your presentations. In Google Docs, creating and customizing text boxes is easy. To add text boxes to your paper, you can use the drawing tool or the single-cell table. Create text boxes in Google Docs with ease by following our step-by-step instructions. Finally, brush up on your Google Docs skills by learning how to strikethrough. If you are still having trouble posting on Instagram after following this guide. I will try to respond and help you as soon as possible, contact us via Bellen Google Nederland.