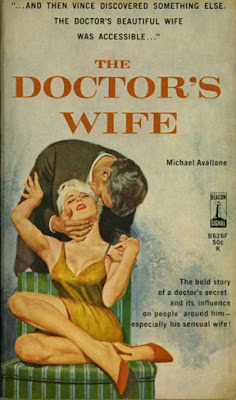 In my reading lifetime, I'm sure I have read well over a thousand books. Maybe close to two thousand. Hell, counting comic books and magazine novelizations and re-reads, maybe more than that.
Many of these I recollect vividly and completely. Many others I remember liking to various degrees but can only specifically recall certain parts, like the title and author perhaps, or maybe some key, memorable scenes.
Such was the case with THE DOCTOR'S WIFE by Mike Avallone. I remembered the title and byline and a few scenes that stuck with me—and, mostly, I remembered liking it a lot. It was published in 1963, I'm guessing I read it two or three years later. I would have been about seventeen. I was just then learning to watch for the Avallone byline (one of the first cases where the author's name started to catch my eye as quick or quicker than the title) because I knew it would likely be something I'd enjoy.
Okay, for any of you who might be smirking and chuckling at this point because you've been fed the Kool-aid all these years about what a lousy writer Avallone was, how his phrasing came to be called “Avallone-isms” because of the quirky metaphors and puns and sometimes wacky plotting he employed ... Nuts to you. All I know is that the guy could tell a damn good story and I liked the way he did it. Especially during this period—the late Fifties through the Sixties. He was at his most prolific (he didn't call himself “the fastest typewriter in the east” for nothing) and at the peak of his craft. 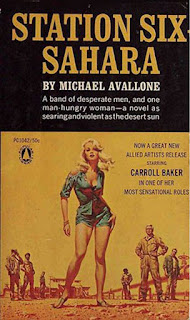 Somewhere around the time I read THE DOCTOR'S WIFE, I was also reading Avallone work such as STATION SIX – SAHARA (movie tie-in), MANNIX (TV tie-in) and also the TV tie-ins for MAN FROM U.N.C.L.E and GIRL FROM U.N.C.L.E. It was also around this time that—to my astonishment, since I was gobbling up everything and anything private eye related—I first discovered Ed Noon in THE FEBRUARY DOLL MURDERS. The doubly surprising part about this was that, by then, Mike had penned fifteen previous Noons and I hadn't come across any, except maybe a magazine excerpt from LUST IS NO LADY.
Since all of the above titles were published in the mid-60s, some three or four years after DOCTOR'S WIFE, I can only assume that I picked up DOCTOR'S either second hand or buried deep in the back of a spinner rack slot. At any rate, once I had it in my hot little hands I tore through it in one or two settings and came away very satisfied.
The thing was, DOCTOR'S WIFE was put out by Beacon Books, one of – if not THE – top publishers of “adult” paperbacks (the other biggie being Midwood) at the time. By today's standards, it should be noted, these were pretty tame. Yet for all his success up to that point in the mystery/crime and media tie-in fields, here was Avallone cranking out “sex books” and signing his own name to them. By my count, he did about ten of them through the early/mid Sixties.
And here's the kicker: In my humble opinion, some of these “adult” titles represent some of his best writing. It was obvious that he took them serious and treated them accordingly. Years later, I had occasion to mention this to Mike and he was pleased to hear that assessment. So much so that when Gary Lovisi at Gryphon Books re-published the adult-themed MITZI later in Mike's career, he honored me by asking me to write a Foreward for it. Which I did, and again took the opportunity to opine on the strength of his writing in the adult field. 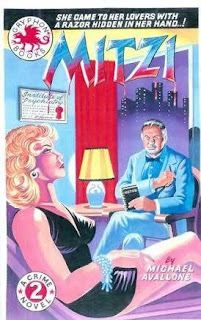 There's no better example of this than THE DOCTOR'S WIFE. The prose is lean and straightforward (not much of the quirky touches that would gain traction in Mike's later work), the dialogue snaps, and the sense of time and place (New York City in the late 50s/early 60s) is spot on. Written in first person, it revolves around one Vince Allen, a struggling actor who works as the overnight manager of a greasy spoon to make ends meet, and chases acting try-outs during the day. Each morning after finishing his greasy spoon gig, Vince walks through Central Park to clear his head and put the smells of the steamy diner behind him. On one of these mornings, in a rather dramatic fashion, he encounters the stunningly beautiful and mysterious Erika Paul—who turns out to be the doctor's wife of the title—as she is out walking her Irish setter, Apollo. From there Vince's life will never be the same. Naturally, he and Erika have further meetings in the park and quickly become passionate, star-crossed lovers.
As this involvement becomes more heated and more complex—they can never be completely together, Erika tells him, for reasons she won't explain in detail other than to say that her husband is a powerful, dangerous, insanely jealous man—Vince is also torn by other aspects of his life. He's gotten tangled up with Emily, who ditches her current boyfriend—an innocent “kid”, another wanna-be actor whom Vince has been mentoring—because she claims to have fallen hopelessly for Vince. Before long, they're ensuing trysts (Emily can't seem to get enough sex) causes her to be “late” and that adds even more stress to Vince's life. He begins shopping around for someone willing to perform a back alley-type abortion. In the course of all this—while his obsession for Erika grows and Vince longs for every possible moment they can sneak to be together—there are some very nice “filler” scenes involving co-workers and clientele at the greasy spoon and the world of acting try-outs. Avallone's writing really shines here. He seems to have a deep affinity for the whole actor/acting thing and—although I never thought to ask him about it in any of our exchanges—it seems like he might have lived that life for a time, or was very close to someone who did.
The book ends in tragedy. I can't say too much more without spoiling key story elements and ruining some some very suspenseful, exciting twists at the climax.
The closing passages wrap it up this way:
“In my mind I still walk back through Central Park on my way home from work ... my Erika waits for me there. I see her coming down the paved walk with her long, flowing black hair.
Erika—with Apollo loping easily before her.
Erika Paul. The dame with the dog.”
I mention this because it also conveys what Mike told me he wanted the book to be titled ... The Dame And The Dog. He fought hard for that but, in the end, couldn't persuade the Beacon powers to go with it.
At this point, I guess it doesn't really matter. Whatever it's called, it's a damned enjoyable read. It's hard to come by these days (after all these years I had to special order a copy, just to re-visit it and see if it held up; which it does, as I guess this post demonstrates)—but if you can get your hands on a copy, I urge you to give it a try.
Above all, never be discouraged to give Avallone a try based on the snarky comments and ridicule you may have heard about his writing—often from those unworthy to carry his typewriter ribbon. Yes, some cringe-worthy “Avallone-isms” certainly exist. But far outweighing those are the many tales he spun that were/are immensely readable and entertaining.
Posted by wayne d. dundee at 12:46 PM

I just reread your blog post of November 2013 concerning LUST IS NO LADY by Mike Avallone. I see we discussed the injustice that Mike suffered from some reviewers. He's been gone almost 20 years now and I miss him a lot.

Thanks for commenting, Walker. Yeah, I still miss Avo, too. It burns me that he suffered injustice when he was alive and even more so now when his name comes up and is so often ridiculed for some of his quirky passages. All I know -- in addition to getting to know and like him in person -- is that he wrote a heck of a lot of entertaining books and stories enjoyed by a heck of a lot of satisfied readers. Seems to me that indicates he was pretty darn good at what he did.