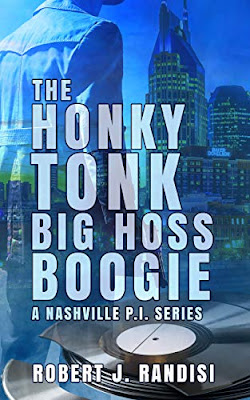 This exciting PI mystery from veteran Randisi is the first to feature Auggie Velez, a Nashville sessions musician who is also a licensed private investigator. Auggie is immediately engaging as a protagonist. He is fairly well established on the Nashville music scene as a reliable sessions man, preferring that work to going on the road. But the real dream he continues to chase is one day writing and performing his own music. The PI work, which he began to augment his sometimes sporadic income, is something he has more recently ventured into and is therefore less seasoned at; but his basic street smarts, combined with past military training, a keen sense of the Music City scene, and the mentorship of the aging private eye who helped him get his ticket, are all helping to hone his skills.
And Auggie is soon needing to call on all of this and more after he accepts a job that appears to be a simple, though somewhat mysterious package delivery for a big time music producer. When the recipient of said package, a common briefcase whose contents were never revealed to Auggie, turns up murdered, Auggie becomes a very prominent “person of interest”. As the police investigation becomes stalled as far as any other leads and the music executive who originally hired Auggie remains reluctant about admitting his role, Auggie is forced to start digging deeper into the whole mess if for no other reason than to prove his innocence.
What ensues amounts to a fascinating tour of Nashville and its many colorful places and characters. As usual in a Randisi novel, snappy dialogue carries much of the load. But there also is real depth to the characterizations of many of the individuals encountered, including Auggie himself. Perhaps some of the best work Bob has done in this regard. There is a particularly poignant scene about mid way through the novel where, after some burglars have broken ito Auggie's apartment and trashed his personal, deeply treasured collection of old guitars – after the police have left and he is all alone starting to clean up the mess – Auggie breaks down and weeps over the loss that only he can understand the full impact of. Very strong and brave, I thought, for Bob to bare that much of his protagonist's soul.
When finally revealed, the secret of what was contained in the briefcase is a doozy and the overall conclusion to the case, when reached, is satisfying. The whole thing is made even more realistic by the fact that, due to the deaths of some players along the way, not every minute detail can be fully explained. Nevertheless, enough is established to clear Auggie and the key bad guys are sufficiently punished. Even more good news is that – as announced by the publisher at the close of this book – Auggie will soon be showing up again in a new case titled THE LAST SWEET SONG OF HAMMER DYLAN.
I'm definitely looking forward to that and, in the meantime, strongly recommend THE HONKY TONK BIG HOSS BOOGIE. Don't miss it!
Posted by wayne d. dundee at 12:34 PM

"A slick plot, fresh characters and a fascinating look at a giant industry and the city that's home to it . . . Bob Randisi at his absolute best." - Ed Gorman

Auggie Velez is a struggling "session man" in the Music Capital, Nashville. That means he'll play for any group that needs a guitar. When his second career as a private detective is facing lean times (which is almost always), Auggie will also take jobs that could get a guy in trouble.

Offered five grand by a bigshot record producer to deliver "a little package," Auggie Velez should know better. But the producer dangles more in front of him than money: a chance at "making it" in the music trade.

Don’t miss crime master Robert J. Randisi at the top of his form, with a fast-moving mystery set in a honky tonk city where big dreams--and the dreamers--come to die.
nice post
but I have some questions in my mind, if anyone knows everything about it, please answer me all those questions.
-----------------------------------
Bellen Netgear Nederland

Instagram may have blacklisted some IP addresses. To change your IP address, you can use a VPN or switch to another computer and try again. You can also do it after 2-3 days. Many customers have tried it and found it effective in solving their problems............... Instagram Bellen