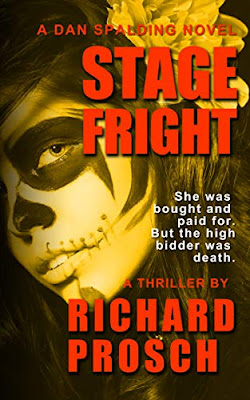 This latest in the Dan Spalding mystery series (number four if you're counting – and you owe it to yourself to be keeping track because you don't want to miss any of these) really cranks up the action and sends Dan and his buddy Howard Thyme on a collision course against not only the local mob but also some out-of-town baddies (West Coast) who are looking to make some Ozark City inroads.

As the owner/proprietor of Spalding's Groove, a vintage record store, Dan doesn't go looking for trouble or brushes with members of the criminal element. But neither is he one to look away from wrongdoing, especially when it involves abuse/mistreatment of the vulnerable—and his background as a former investigator for the Missouri State Police gives him the training and lingering contacts to take meaningful action if required.

This time around, a reason to get involved and take action is pretty straightforward … The young niece of his pal Howard is in trouble. She, under the name of Apple May, is currently stripping at a new, uber-glitzy gentlemen's club that has just opened up on the edge of town and has gotten word to Uncle Howard that she's caught up in the flesh circuit and is being kept against her will from getting out.
Figuring it will be “easy-peazy”—just a matter of grabbing Apple away from a couple club bouncers—Dan and Howard take a ride out to the joint to get the job done. The grab is accomplished, although not without some pretty rough resistance from the bouncers who don't exactly make it easy-peazy, and Apple is taken home to her uncle's place, awaiting arrangements to be reunited with her mother, Howard's sister.
But, as you might expect, that's not the end of it …

Within twenty-four hours, Apple is missing. Howard doesn't know where she is, neither do the flesh peddlers who badly want her back. Threats, more rough stuff, double-dealing, ulterior motives (some on the part of none other than Apple herself, who may not be quite so innocent as first thought), and escalating tensions ensue. Another stripper from the club seemingly comes to Dan's aid but, despite the pleasure of her company, he can't help but suspect her end game may be a little murky. When local mob boss Adrian Mitchell—who has rather tenuous ties with Dan dating back to Mitchell's past dealings with Dan's late brother—also becomes involved, the tension and danger ratchets up even more.
Before it's all over, some lives will be lost, some will be ruined, and one or two – maybe – will be salvaged.

As is always the case in any work by Prosch, the lean prose and snappy dialogue (especially in this series) are as much a part of the enjoyment as the colorful characters and the twists and turns of the story itself. It all makes for a winning combination that leaves you satisfied yet immediately craving the next Spalding adventure.
Strongly recommended.
Posted by wayne d. dundee at 10:12 PM