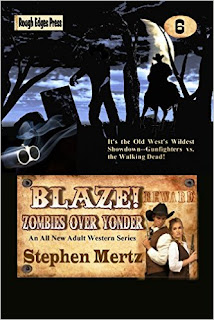 In this sixth entry, by Steve Mertz --- veteran action/adventure writer and concept creator of the BLAZE! series --- ZOMBIES OVER YONDER is a wild, action-packed yarn that takes off like a shot and zips along like a well-aimed bullet.
J.D. and Kate Blaze, the Old West’s only man and wife team of gunfighters, are plying their trade in a traditional manner at the start. When the fugitive they’re bringing in for a reward makes a daring escape attempt with the aid of some hardcases lying in wait at the train station, the attempt fails in a bloody shootout. But before the rabid dog fugitive can be cut down, he ruthlessly blasts an innocent young woman bystander. The Blazes feel a share of the guilt for her death. So, based on a letter found on her body, they head for the remote town of Yonder to make contact with the father she was on her way to visit and inform him of the tragedy.
Once J.D. and Kate get to Yonder, however, all hell --- literally --- breaks loose. They find the father has also died under suspicious circumstances, his mine has been taken over by the mysterious Count Vlad who employs not only has his own small army of trigger-happy gunmen but also has the local U.S. Army colonel in his pocket, and the nearby townsfolk live in cowering fear … not *just* from the count and his gunnies but, more than anything, from the unseen yet terrifying “workers” who toil deep in the mine.
Before the Blazes can work things out and, just incidentally, save their own skins, plenty more bullets will fly, corruption and curses will have to be dealt with … and the dead will walk!
All the Western sweep and excitement you could ask for, plus some spooky twists to spur things along. Saddle up for the ride, you’ll enjoy it.
Posted by wayne d. dundee at 10:08 AM