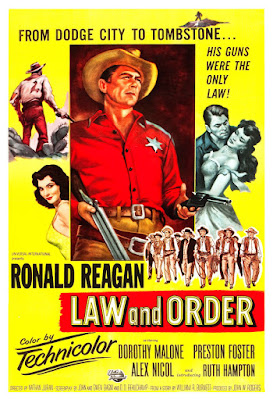 I caught this flick on cable the other night and was pleasantly surprised by how tough, taut, and entertaining it was (apart from a wholly uninspired title). In the lead role, Ronald Reagan plays Frame Johnson, a “town tamer” type lawman who has already cleaned up several towns and, at the start of this film, has a tight grip on Tombstone. Too tight, some say.
When Johnson brings in yet another fugitive and then has to face down yet another lynch mob, he decides he’s had enough. He hangs up his gun, takes off his badge, and heads for the town of Cottonwood where he’s bought a ranch out in the country where he aims to settle down life his life free from upholding the law and the violence that comes with it. Accompanying him are his two brothers, Lute and Jimmy; he leaves behind his lady love Jeannie, who has been refusing to marry him while he was packing a badge, but they agree she will come as soon as he has his new place ready.
No surprise that, as soon as they hit Cottonwood, the Johnsons quickly find out it is a hellhole of trouble and corruption under the thumb of one of Frame’s old enemies, Kurt Durling, who has a crippled hand and a seething hatred for Frame thanks to their last encounter. Gunfights, murder, lynching, and rustling all seem to be commonplace in and around Cottonwood. But Frame --- despite the pleas of his own brothers and pressure from a group of town elders who want him to take up the badge again and clean up Cottonwood like he has so many places before --- vows to stay out of it and tend strictly to getting his ranch ready so he can send for Jeannie. 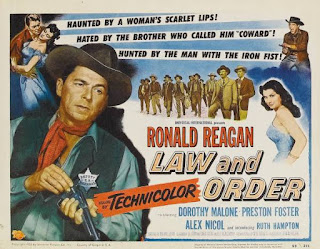 Needless to say, the trouble only escalates. Finally, after one of his brothers is shot when *he* puts on a badge to try and make things better, Frame straps on his gun once more, pins on the badge of his fallen brother, and sets out to square things.
The results are violent and ultimately satisfying. The bad guys get theirs, the good guys are left to pursue happier trails.

In addition to some obvious (though very loose) parallels to the real life story of Wyatt Earp and his brothers, this movie is based on a well-regarded book entitled Saint Johnson, written by novelist and famed screen writer W.R. Burnett. A version of the book was previously filmed (and considered a “bigger” picture) in 1932, also under the LAW AND ORDER title, starring Harry Carey and Walter Huston, with a screenplay co-written by John Huston. I watched part of this one on You Tube and it seemed to be very different than the Reagan version. Likely it stuck closer to Burnett’s book. Still, if you have an hour and twenty minutes to spare, the 1953 version with Reagan and company ain’t a bad way to spend it
Posted by wayne d. dundee at 11:40 PM