Available Now – The Lawyer: THE RETRIBUTIONERS by Wayne D. Dundee 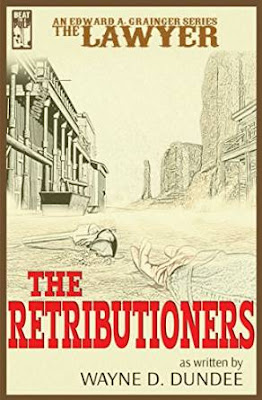 J.D. Miller, aka The Lawyer, continues to hunt the men that slaughtered his family. His next target is Jules Despare who’s been riding with the Selkirk gang robbing banks. When the town of Emmett, Texas, is marked by the hardcases and the local marshal murdered, The Lawyer is asked by the town’s influential residents to track down the reprehensible outfit. But he has little use for the narrow-minded bigots that won’t stand behind the remaining deputy—a black man named Ernest Tell. After Tell resigns, he suggests a partnership with The Lawyer who refuses. It’s obvious, though, these two avengers are gunning for the same men and will eventually work together to settle old scores in THE RETRIBUTIONERS.
Best-selling, Western hardboiled author Wayne D. Dundee (The Empty Badge, The Guns of Vedauwoo) pens his second Lawyer book that is based on characters created by Edward A. Grainger, author of the Cash Laramie and Gideon Miles series.

WD here: This is the second book I’ve done in ‘The Lawyer’ series based on characters created by David Cranmer (aka Edward A. Grainger). I liked writing about this character again, trying to dig a little deeper into his psyche beyond the obvious quest for revenge that drives him. How could a man so previously immersed in law and justice become such a lethal avenging angel? The answer, I suggest, is that --- other than the matter of a “legal ruling” --- there really isn’t a whole lot of difference between what we call ‘justice’ … or personal vengeance or retribution. They’re all geared toward making someone pay for a wrong committed. It’s just that, when it’s taken on as a personal matter, there is no room for “legal loopholes”.
Which also brings us to the title – THE RETRIBUTIONERS. As I explained to David when I submitted the manuscript, I don’t even know if there is such a word. If there isn’t, there should be. Number One, it conveys clearly what I was aiming for in the story; Number Two, I have personally always loved tales of retribution in books and movies; Number Three, I couldn’t help thinking that it sounded like it might have been the title for an entry in one of my favorite series --- the Matt Helm books by Donald Hamilton. (Not meant to imply my writing is anywhere near the level of Mr. Hamilton’s.)

I hope you give THE RETRIBUTIONERS a try. I think you’ll like it.
Posted by wayne d. dundee at 7:18 AM

Wayne, I love the way you made this so much more than a standard revenge Western.