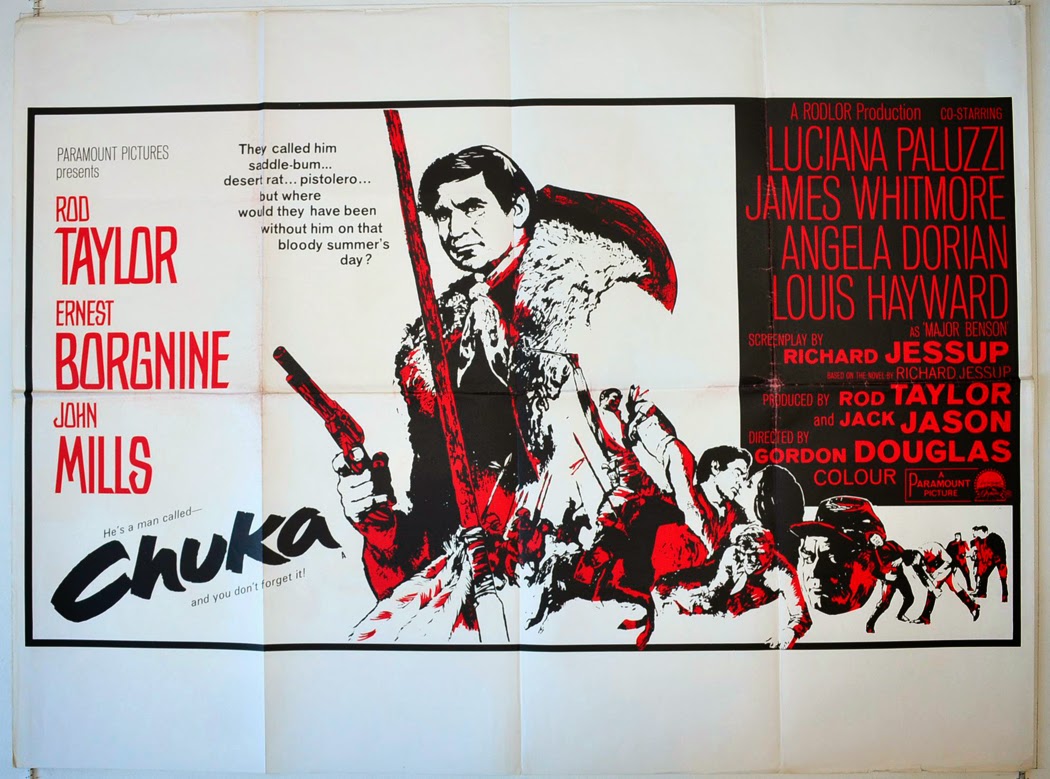 I first saw this movie at a drive-in theater (where I tended to see most movies back in those days) in the late sixties, shortly after its release. I didn't remember a whole lot about it, other than recalling it to be somewhat boring and generally unimpressive. My disappointment, I suspected afterward, might have been partly due to the fact that one of the female co-stars was a particularly curvaceous Playboy Playmate named Angela Dorian (later to be known as Victoria Vetri) who, despite having a fairly prominent role, kept those curves very modestly covered all through the picture.
Now, having recently watched the film again after 40-odd years, I still found it disappointing but for reasons notably apart from Ms. Dorian's unfortunate wardrobe choices.

In point of fact, CHUKA is an ambitious Western that hits much of what it aims for yet nevertheless misses some key marks.
Rod Taylor (who produced and co-wrote, in addition to starring) is quite effective in the title role. The name Chuka comes from a time when, as a youngster living on a ranch, he was found always hanging around the chuckwagon. He is described as "a quiet, lonely man" who has grown to become a renowned gunslinger. Taylor plays the part with a lot of intensity and comes across very convincingly as a tough hombre. He also handles the action scenes well. There is one sequence where an arrow streaks in through a window of the cavalry commander's quarters and hits one of the officers present --- Taylor (as Chuka) immediately plunges headlong out through the same window and goes into a rolling dive that ends up with him on one knee in the dirt, gun drawn, and blasting at the fleeing brave who fired the arrow. One may question the wisdom of plunging so recklessly toward where an arrow just came from, but the swiftness of the reaction --- while everyone else is momentarily stunned into frozen inactivity --- distinctly marks Chuka as a man of action and unquestionable bravery. There are other scenes of Chuka's remarkable speed with a gun and his endurance to survive a brutal fistfight that serve to reinforce this image.

The central plot of the film involves the plight of a remote army fort surrounded by starving, desperate Arapahoes preparing to mount an attack for the sake of gaining the food and supplies they are so badly in need of. The fort personnel is made up mostly of rejects and exiles from elsewhere, led by a former British commander who is dealing with personal demons of impotence and perceived past cowardice.
The commander is played by veteran John Mills, who does a nice job of playing a tormented man. Also on hand are other veteran character actors, James Whitmore as a salty, hard-drinking scout; and Ernest Borgnine as what at first appears to be just another heavy of the type he could play in his sleep, this time a bullying sergeant. The storyline and Ernie's acting chops, however, combine to give the sergeant some unexpected and even sympathetic depth. Also present, in addition to the aforementioned Ms. Dorian, is Italian actress Luciana Paluzzi playing a Spanish noblewoman who is escorting her niece (Dorian) to California for an arranged marriage. Arriving at the fort via stagecoach, the two women are stranded there until the Indian threat is quelled.
I don't want to give away too much about the ending, but the Indian threat is not quelled and the climax is a full-out attack on the fort with very grim consequences.

Another film veteran, Gordon Douglas, handles directing duties with a sure hand. The script is co-written (along with Taylor) by author Richard Jessup, based on his novel of the same name.
Ultimately, for me, the film's shortcoming comes from too much melodrama and angst covered by the back stories of the various characters. Layered a bit too heavily over the grit and action, the end result is … well, more depressing than exciting. Still, as I said at the outset, the film's goal is ambitious and it does have several good sequences. I'm glad I watched it again, I came away with a different and better impression. For the Western movie completist, I'd recommend it as worth checking out if you catch it on cable some time, or maybe as a bargain bin DVD. Your take might be more positive than mine.
Posted by wayne d. dundee at 9:10 PM

I'm in favor of any movie with Luciana Paluzzi in it, and Ropd Taylor has always been a favorite. However, I did not see this movie. I'll be searching for it. Hopefully, it's on Youtube.

I saw it when it came out and liked it. I'm not sure if I'd enjoy it as much at this stage of my life, but I'd be glad to see it again.

Very much a fan of Rod Taylor. Anyone remember Bearcats!

That was me in the last comment, Wayne. Sorry 'bout that.

I recorded this from Encore Western the other day. It's got its merits but I couldn't help laughing out loud at the big sit down dinner scene where Mills tells his female guests that his officers are all cheats, traitors and cowards. He's got a hostile tribe of Arapajo about to wipe out his whole fort but he's gonna ruin what may be their last supper with this nonsense. Real morale booster. AND the end of the fight between Borgnine and Taylor was pretty spurious. I expected Taylor to hug Ernie and say. "Love you, man!" You summed it up, Wayne. A nice try but disappointing unless you want some laughs.
John M. Whalen