Another Look: THE BIG SKY (1952 film, directed by Howard Hawks) 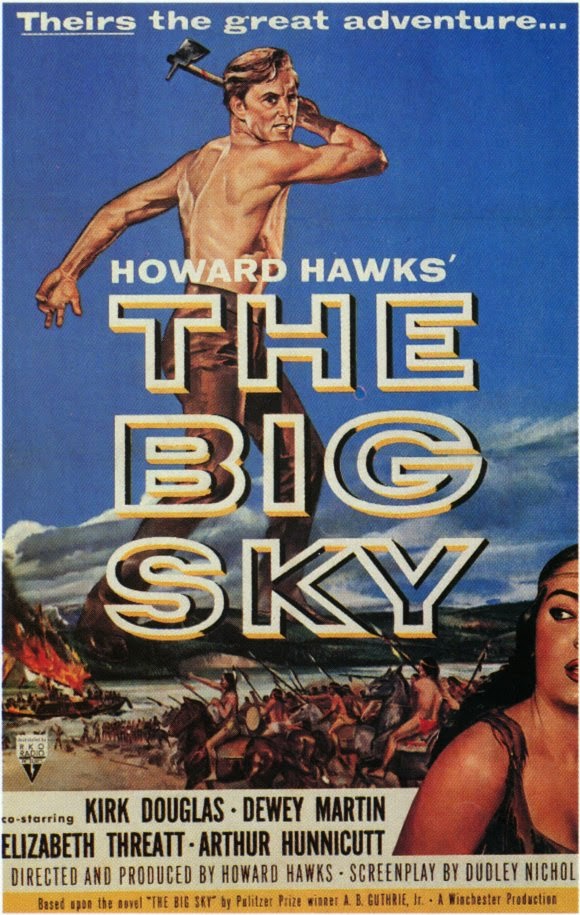 Howard Hawks, without a doubt, is my favorite film director.
I liken him to a top-notch old pulp writer from the Golden Era. He could work in any genre and make it his own, producing work that was high quality and highly entertaining. He never seemed to strive for lofty significance, just to do a good job at telling good stories; and, in the process, he just happened to turn out work of considerable significance.
Consider the range of films he made and only a sample of titles in various genres: Screwball comedies (Bringing Up Baby; Ball of Fire) – Crime Dramas (Scarface; To Have And Have Not; The Big Sleep) – War Films (Ceiling Zero; Sergeant York) – Musicals (A Song is Born; Gentlemen Prefer Blondes) – Horror (The Thing From Another World; and, yeah, I don't care if the credits do say it was directed by Christian Nyby, we all know damn well it was Hawks).

Curiously, considering that one of the trademarks Hawks became famous for (in addition to rapid, overlapping dialogue) was tough-guy, male-bonding, "a man's gotta do what a man's gotta do"-type of storylines, he only made a handful of Westerns. Six total, if you include 1934's Viva Villa!, for which it was generally known that Hawks did uncredited work both in writing and directing. His four best known Westerns are the ones he did with John Wayne --- Red River; Rio Bravo; El Dorado; and Rio Lobo. The first three are widely considered among the best of the genre (personally, Red River is my all-time favorite film, period) --- the less said about Rio Lobo, the better. (It was the last film of Hawks' career, so one has to wonder if perhaps he wasn't in the best of health, or maybe just played out.)

All of which is a sort of long-winded way to arrive at The Big Sky.
This is one of Hawks' least-discussed and least-heralded films. That's a shame because it is a very entertaining, very well done movie. (It received two Academy Award nominations – one for Arthur Hunnicutt, in the Best Supporting Actor category; one for Russell Harlan in the Best Black & White Cinematography category – neither a win.)
One has to consider this a Western Movie, although it is set in 1832 in the Missouri River wilderness as opposed to the more traditional post-Civil War period. "Frontier Movies", generally speaking, have never seemed to attract as wide an audience. 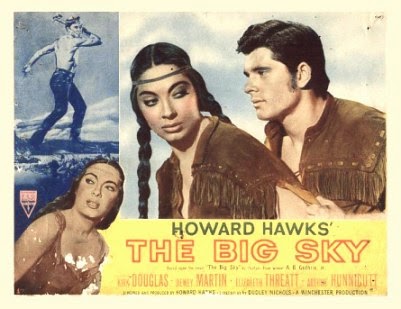 The story follows a fur trading company --- "free traders" as opposed to larger, company-financed, work-for-hire outfits such as the Missouri Company, who they are up against in this case, willing to stop at little to cause their failure and drive them from the territory. They are on their way upriver to trade with the Blackfoot Indians. "Frenchy", the leader of the free trading keelboat crew, has an ace in the hole in the form of Teal Eye, a Blackfoot princess whom he is returning to her people and expects grateful treatment in return.
Jim Deakins (played by Kirk Douglas) and Boone Caudill (Dewey Martin) join them, along with Boone's uncle Zeb (Hunnicutt), as hunters to provide fresh meat for the traders/keelboaters.
In addition to the danger and hardships of the river and other natural elements, harassment from the Missouri Company, attack from the Crow Indians (enemies to whites as well as to the Blackfoot tribe), the free company must also contend with jealousy and conflict between Jim and Boone, who each develop feelings for Teal Eye.

All of this is wonderfully filmed against the backdrop of Jackson Hole, Wyoming, and is definitely a case where the viewer wishes Technicolor had been used. Nevertheless, the scenery is spectacular and only adds to the strengths of the film. 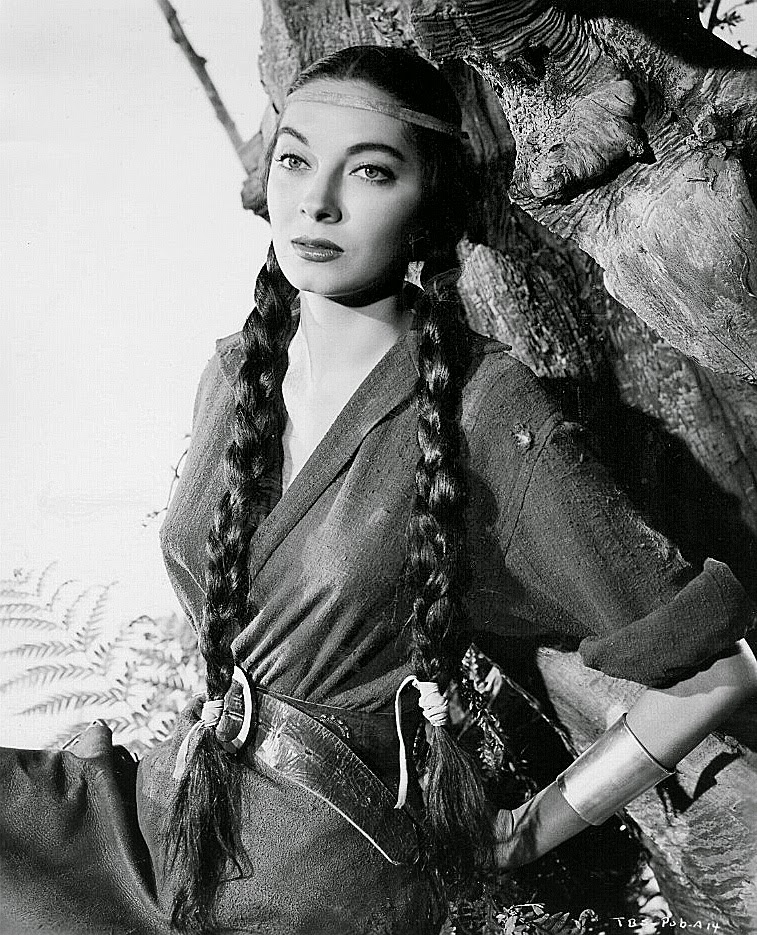 Speaking of scenery, holding her own against Nature's kind as wall as against  acting prowess of Douglas, Hunnicutt, and the rest, Elizabeth Threatt is intoxicatingly sultry and quite memorable in her role as the Indian princess. Nevertheless, she was barely seen or heard from afterward. Almost as curious is the very limited success of co-star Dewey Martin, who held his own equally as well in this outing, but whose career never really took off afterward. He worked sporadically on and off for several years, both in films and on TV, but never really played anything with the stature of this role. (Hell, he even won the girl away from Douglas.)

I should note that The Big Sky movie is based on the highly regarded novel of the same name, by A.B. Guthrie. It is the first in a trilogy of books (The Way West [Pulitzer Prize winner] and Fair Land, Fair Land being the other two) detailing America's westward expansion and the settlement of Montana. The connecting character in the three books is Dick Summers, a friend to Boone Caudill, who appears in the Big Sky novel but not the movie. (Trivia note: Kirk Douglas also appeared in the movie version of The Way West,
in the role of former senator and wagon master William Tadlock.)

Bottom line: If you're in the mood for an action-packed, slightly "different" Western served up nicely by the hands of many solid professionals, lead by Hawks, check out The Big Sky. It's a fine way to spend 140 minutes.
Posted by wayne d. dundee at 10:37 AM

I've never had the chance to see this film, although I do have the soundtrack from it on my Ipod and enjoy that part of the film. Your write-up, Wayne, does make me intrigued and want to see it.