Another Look: THE PROFESSIONALS (1966 movie) 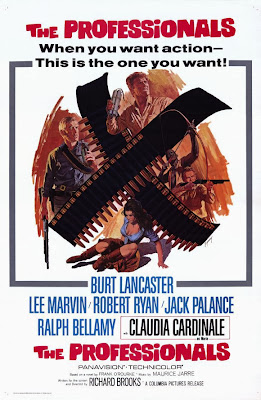 THE PROFESSIONALS is a tight, tough, Western actioner, written and directed by Richard Brooks, released in 1966. It falls in that sweet spot occupied by certain films of that era that still exhibited elements of "the way they used to make 'em" along with revisionist, more permissive "adult" touches that gained ground steadily through the late Sixties and into the Seventies.
In accordance with the title, Lee Marvin leads a four-man, hand-picked team of professionals hired to raid a rebel camp across the border in turn-of-the-century Mexico to rescue the kidnapped wife of a wealthy American rancher. The other team members are: Robert Ryan, playing a horse wrangler; Woody Strode as a scout and Apache-trained tracker; and Burt Lancaster as an explosives expert. Marvin is an ex military man and weapons specialist. The veteran cast is rounded out by Ralph Bellamy as the rancher; Claudia Cardinale as his voluptuous wife; and Jack Palance as Garza, the rebel leader responsible for her kidnapping.
My recollection from previous viewings of this film, including when it first came out, was that Lee Marvin had the dominant role by a considerable margin. This was likely influenced by the fact that the peak of his career came in close conjunction with THE PROFESSIONALS, which hit a year after Marvin's Academy Award-winning performance in CAT BALLOU and just ahead of THE DIRTY DOZEN. A recent re-viewing, however, has caused me to realize that Lancaster's role (his name rightfully also leading in the credits) actually has greater depth and more screen time than Marvin's (although the latter is still featured very prominently).
It is also a fact that the two stars did not get along well during the filming, mainly due to Marvin's heavy drinking and unpreparedness when it came time to go before the camera. Director Brooks (who had previously directed Lancaster in his Academy Award-winning role as THE BIRDMAN OF ALCATRAZ) would say afterward that his greatest challenge in making the movie was to "keep Burt from grabbing Marvin by his drunken ass and throwing him off that mountain".
Nevertheless, none of these behind-the-scenes problems show up on the screen. What the viewer gets there, as I said at the outset, is just a terrific Western adventure filled with explosive (literally) action, romance (at times a bit on the saucy side), suspense, and even a nifty surprise or two.
Strictly for males to take note of: Claudia Cardinale is her usual sultry, sensational self in this. But there is a second female featured here --- an otherwise seldom-seen actress named Marie Gomez playing a rebelista known as Sergeant Si Si ("she never says no") Chiquita --- who manages to, er, outdistance even the curvaceous Claudia in some key scenes.
If you haven't seen this one in a while --- or for some reason have never seen it --- it is worth a re-viewing and definitely worth checking out for the first time.

P.S.   My buddy James Reasoner probably knows the answer to this, but I've got a question to toss out for general comment: It seems evident to me that John Benteen's popular FARGO character (which debuted in print about three years after this film) must have been influenced, visually for sure, by Marvin's character … Ex Rough Rider, multi-skilled in weapons and fighting, premature bone white hair, battered old campaign hat, etc. The early Fargo paperbacks certainly conveyed this and the Piccadilly reprints are continuing … Did Benteen ever acknowledge this influence/inspiration?

I got a big kick out of this one when I saw it in the theater. Good point about Benteen.

I don't recall Ben Haas ever acknowledging the Lee Marvin influence on Fargo, but it's undeniable. Haas labored mostly in anonymity, though. There are very few interviews with him, especially about his Western writing.

I loved THE PROFESSIONALS as well. Of interest to me is that it was based on a little known novel A MULE FOR THE MARQUESA by Frank O'Rourke. A forgotten writer. He had a lot of books published in the fifties. Mostly westerns, I think. Several other of his novels were made into movies-THE BRAVADOS and THE GREAT BANK ROBBERY. He died in 1989.