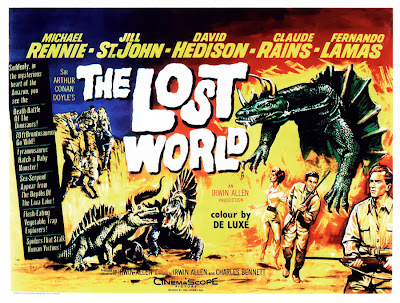 The term "guilty pleasure" tends to get overused but, nonetheless, it properly suits my feelings toward this film. I've long been a sucker for certain cheesy sci-fi/horror flicks of this ilk. Hell, I even like some of current crop they run on the Sci-Fi Channel. I'm not sure why a few of them click for me yet others get deservedly shrugged off as mere junk. I hate to admit to such a shallow level of character and maturity, but I have a sneaky hunch that if one of the female stars is appealing enough, then my "junk tolerance" drops considerably.

I suspect the latter --- in the form of a young Jill St. John in tight-fitting pink safari slacks --- plays a part in me liking this 1960 version of THE LOST WORLD. Otherwise, the plot is hoaky, the acting is so-so (at best), and the special effects aren't all that special. This was only two years after Ray Harryhausen's spectacular Dyanimation effects for THE 7TH VOYAGE OF SINBAD, so the ol' "glue some scary-looking fins on Komodo dragons and crocodiles" trick for creating the illusion of dinosaurs really suffered by comparison.
But there was those pink safari pants … I don't know if they count as special effects or not. But inasmuch as I was twelve at the time of this movie's release --- and on the brink of busting wide open with all kinds of raging hormones --- I suspect they seemed pretty special to me. In fact, upon viewing THE LOST WORLD again the other night, some fifty-odd years later, I still – er – noticed them.

Shortcomings aside, the film still has a lot of energy and top level production values in departments such as cinematography and vivid DeLuxe color. And in addition to the aforementioned Miss St. John, the cast includes mostly veteran actors such as Michael Rennie, Fernando Lamas, David Hedison, and Academy Award-winning (and multiple nominee) Claude Rains (as Challenger) who chews up the scenery with such great relish you wonder how they kept enough vegetation on the set for the jungle shots.
The whole works was based on the novel of the same name by Sir Arthur Conan Doyle (yeah, the Sherlock Holmes guy), and was the first of several books and stories he wrote featuring renowned explorer Professor Challenger. This film version was helmed by producer/director Irwin Allen, during his early sci-fi phase that would also include films such as VOYAGE TO THE BOTTOM OF THE SEA and FIVE WEEKS IN A BALLOON before shifting to a string of TV series (Voyage To The Bottom Of The Sea, Land Of The Giants, etc.) and then culminating in epic disaster blockbusters like THE POSEIDON ADVENTURE and THE TOWERING INFERNO.

Upon sitting through it again, I found that THE LOST WORLD was still a lot of fun. And that's really all this kind of movie is supposed to be.
It also brought back a recollection that had totally slipped my mind of something that occurred when I first saw THE LOST WORLD in a tiny, drafty movie house in Genoa, Illinois… For the first and only time in all my years of movie-watching in theaters, there was a scene that caused the audience to break out in applause right in the middle of the film. The scene? It is near the big climax, just before the volcano explodes. The native tribe that inhabits the "lost" Amazon plateau where the explorers have ventured, is chasing them due to their transgressions. They are fleeing through underground caverns on a high ledge above a river of lava. One of the explorers pauses to torch some dry scrub brush growing along the ledge --- the fire quickly flares back and drives the pursuing native witch doctor and his crew off the ledge and into the lava. Can't say as I can see where it is such a high point of excitement upon watching again (and, in fact, in this age of political correctness run amok, there possibly would those in the audience who would boo such shabby treatment of the indigenous people). But, at the time, it sure revved the motors of that particular movie audience.
Maybe that's part of the implanted impression that makes THE LOST WORLD a guilty pleasure for me still today.
Posted by wayne d. dundee at 4:07 PM