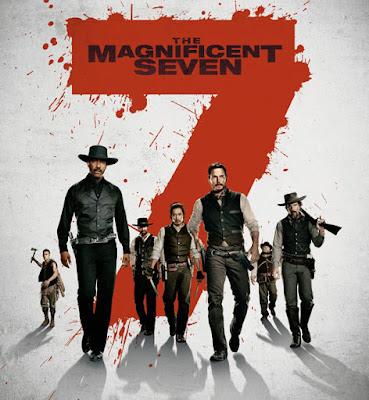 Let me get it out of the way right up front: I liked this film a lot.
It has flaws and some plot holes you could drive a Humvee through --- but what big-budget action flick these days doesn’t? And, when all is said and done, that’s exactly what it is and all it sets out to be … a big, sprawling, rip-snortin’ Western actioner.
I’m not familiar with the original Seven Samurai, so I can’t/won’t try to compare how this newest version stacks up against that. As for the Yul Brynner/Steve McQueen 1960 Western that most readers of this blog are likely more familiar with, I think this one holds its own.

The basic plot remains the same. A peaceful community of lower/middle class working folks is overrun by a ruthless force of hardcases against which they have no chance of fighting back and winning. In desperation, they pool all their meager resources of any value and seek to hire professional gunmen who will fight back on their behalf. The first man they approach for the job – Sam Chisolm, a bounty hunter - is moved not by the price they are willing to pay but rather by what it represents to those offering it. (“I’ve been paid a lot for my services before, but never everything.”) Chisolm takes the job and begins gathering up some other professionals to aid him.
This time around, the community is not a humble Mexican village besieged by bandits out of the mountains but rather a small mining community being overrun by a greedy, vicious corporate industrialist looking to drive everyone out of the valley in order to mine all the land for himself. The villain is named Bartholomew Bogue and is a supremely evil cur written to such an excess that it’s like the old Snidely Whiplash/tie-the-fair-maiden-to-the-railroad-tracks days 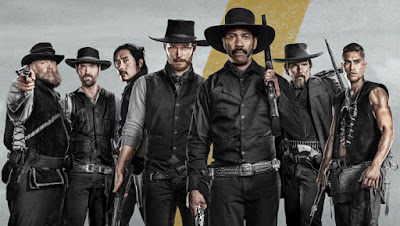 Denzel Washington, of course, is Sam Chisolm. Joining him are: Christopher Pratt as Farraday, the gambler who dabbles in explosives; Ethan Hawke as Goodnight, the ex-Confederate sharpshooter who is haunted into current inaction by all of his past killings; Vincnet D’Onofrio as mountain man/Indian fighter Jack Horne; Byung-hun Lee as Billy Rocks, an assassin indebted to Goodnight; Manuel Garcia-Rulfo as Vasquez, a Mexican outlaw; and Martin Sensmeier as Red Harvest, a Comanche warrior.

My first reaction upon first hearing the changes to the plot structure the listing of characters who would make up “ the Seven” was: OK, here we go again: Political Correctness on steroids --- everything from the greedy, nasty Big Industry guy to Diversity in the form of representation by every ethnic group known to mankind. But you know what? Except for the over the top uber-villainy of the Bogue character, everything else works just fine. Each character has his moment, his back story, and his purpose to the group. And the camaraderie that develops amongst them plays out nicely.
What’s more, the female lead --- Haley Bennett as Emma Cullen, a widow from the town --- brought so much to the story via her strength as written and the power of Ms. Bennett’s performance that it wouldn’t have been too far out of line to have made her one of the Seven … or perhaps called it The Magnificent Eight. (Yeesh, now who’s getting caught up in this PC crap!)

The action sequences throughout and especially the big climax (although a bit excessive and too drawn-out) are exceptionally well staged. In fact, all the production values --- acting, photography, set designs, music --- are all top notch. And did I say music? During the closing credits we even get the swelling, stirring strains of Elmer Bernstein’s famous theme from the 1960 classic.

All in all, IMO, this movie is just what we need the most right now --- a big, boisterous, good old-fashioned Western!
Recommended.
Posted by wayne d. dundee at 2:02 PM

I enjoyed it, too, and it was fun to see a western on the big screen again. I think it suffers a little in comparison with the Brynner/McQueen version in that some of the supporting characters in that one got a bit more screen time and were a little better developed, but maybe that's just nostalgia speaking.

Thanks for the review, Wayne. I will go see it now. I'm very happy to see another western get made and do so well at the box office.