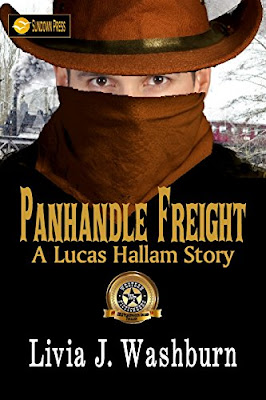 Lucas Hallam has long been one of my favorite fictional characters. Not only that, but he ranks as a favorite in TWO separate genres --- PI mysteries and Westerns. Hallam, you see, is a man of two worlds and two eras: A gunslinger, Pinkerton agent, and lawman in the closing years of the 1800s who has gone on to become a licensed PI and part-time stunt man in the silent movies of 1920s Hollywood.

The very distinct creation of L.J. Washburn (who most folks know as Livia Reasoner, the wife of prolific writer James Reasoner), Hallam first appeared in short stories, starting with an appearance in THE EYES HAVE IT, the first anthology from the Private Eye Writers of America. He has since appeared in numerous other short stories and also in three (to date) novels --- WILD NIGHT, DOG HEAVIES, and DEAD STICK.

WILD NIGHT won a Shamus Award from PWA and subsequent Hallam works have racked up numerous other awards and nominations.

Livia has been writing about Hallam for over thirty years and her latest, PANHANDLE FREIGHT (recently released as a stand-alone eBook novella but originally appearing in 2012 as part of an anthology and earning a Western Fictioneers’ Peacemaker nomination in the short fiction category) shows she has lost neither her love for the character nor her skill at presenting him in another memorable tale. This yarn fits firmly in the Western mold and takes place in an isolated train station in the middle of the blizzard. A number of people, including Hallam, are gathered there to get out of bad weather, waiting in hopes that the train will make it through. One of them is a notorious killer and it’s up to Hallam to figure out which one and prevent him or her from striking again.

Told in clean, tight prose with a good sense of time and setting and an intriguing blend of characters, this is a little gem you don’t want to miss. And if you’re not familiar with the Hallam character, then it’s a good place to start correcting that by using it as a launching pad for seeking out all of the other titles you can get your hands on. Most of them are available on Kindle and very reasonably priced.

I read this when it was part of an anthology a few years ago and loved it. I really like the Lucas Hallam character. And I didn't guess who the bank robber was until the end. Top notch!

Thanks so much, Wayne. I really do enjoy writing about Lucas Hallam. In fact, you've got me thinking about doing a new Hallam novel. I don't know when I'll have time, but one of these days . . .

Many of the themes and concepts behind these tales are my absolute favorites. I love reading history mysteries, so I'll have to get this one. Thanks to both of you for bringing it to my attention.

Livia, that is truly an original idea for a character with so many possibilities, as you prove again and again!

Panhandle Freight was my introduction to Lucas Hallam, and I've become a devoted fan -- of Livia's work in general, and Hallam in particular. I hope we seem more of him!


Well deserved kudos. Need to locate the others to read. I'm on the hunt! Doris/Angela