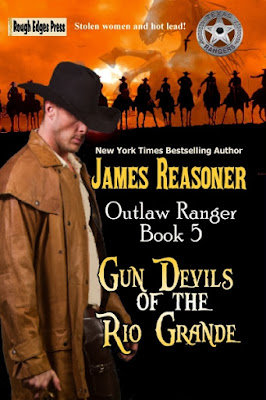 This latest, novel-length entry (number five) in the Outlaw Ranger series is the longest and arguably most satisfying so far. To say that it’s a stand-out in an already fine and firmly established series is praise indeed. (As even more of a plus, the previous entry – THE LAST WAR CHIEF, a short novella that author Reasoner didn’t feel was long enough to warrant a print edition of its own – will be included in the print version of DEVIL GUNS)

This time out, G.W. Braddock --- still clinging to the treasured Texas Rangers badge that he can’t legally wear due to political shenanigans, yet he insists on utilizing for the sake of just causes and thereby resulting in him being branded an “outlaw” by some --- becomes embroiled in the ruthless dealings of two border gangs whose unholy alliance threatens to make the Rio Grande run red with blood.

Stolen guns, stolen women, double-crosses, and gun-blazing action propel this tale and keeps the reader turning pages faster than a gunslinger fanning a .44!

Reasoner’s writing is gritty and descriptive, his characters colorful, his plot twists exciting, and G.W. Braddock is a character you want to see ride back for plenty more adventures.