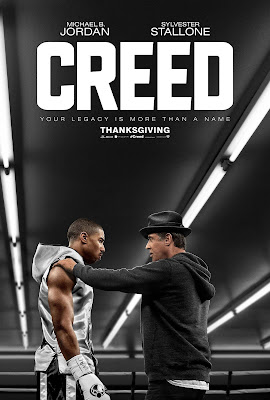 Okay, now that ol’ Sly has won the Golden Globe for his terrific performance in this film (and is hopefully well on his way to an Oscar in the same Supporting Actor category) I guess I ought put down my thoughts, as originally intended right after seeing CREED on its opening day last Thanksgiving.

First off, the overall film is top-notch on all levels. If you count it as part of the Rocky saga stemming directly from Stallone’s original concept and the first film in the series, it would be ROCKY VII. By that measurement, it could be ranked at the very top level of the series, right beside ROCKY (I) and ROCKY BALBOA (VI). By my reckoning, that would place it in very rarified air indeed (even though I have enjoyed all of the Rocky films, even the middle ones with their varying degrees of weariness and over-the-topness).

But CREED is really a stand-alone film, telling the tale of the illegitimate son of Apollo Creed (the former heavyweight boxing champ who gave Rocky his first big break). In the course of his drive to make his own mark in the boxing world, Adonis (Donnie) Creed seeks out the mentorship of an aged, somewhat embittered Rocky. At first, Rocky wants no part of the kid’s quest and Donnie doesn’t even use his father’s surname, wanting to make it strictly on his own skills. Eventually, the two bond (Donnie even takes to calling Rocky “unc” - short for uncle) and the kid’s raw talent starts to develop as Rocky’s vitality for life begins to return. A long-shot big match for Adonis comes along just as a serious illness hits Rocky, leaving them to each face his individual challenge but to do it side-by-side with the other. This bonding/dependency makes up the real core of the story and also provides some deeply emotional scenes that gives Stallone the chance to show his acting chops like he’s had too few times over his career. 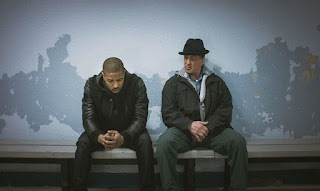 The story and directing by Ryan Coogler is infused with a ton of love and respect for the established Rocky saga and then takes a fresh angle that pumps new life into it. It is the powerful, near-perfect acting of the three main characters --- Michael B. Jordan as Adonis, Tessa Thompson as his girlfriend Bianca, and Stallone as Rocky --- that elevates the whole thing even higher. And when the familiar strains of Bill Conti’s classic Rocky theme drift into the new musical score at exactly the right moment of the climactic big fight … well, if that doesn’t stir you, then your movie enjoyment capacity is on life support.

Even if you’re not a boxing fan or think the whole Rocky thing has been overdone and you’re tired of it, you ought to give this film a chance. I can darn near guarantee you won’t be sorry.
Posted by wayne d. dundee at 2:26 PM

I'm one of those who loved the first Rocky and Balboa but not really any of the others, and I was on the fence about this one. You gave me the shove I needed to drive to Fargo and see it, Wayne. Thanks. Great review.

I will look for this, Wayne. On occasion Stallone does damn good work and based on your review it seems he has excelled again. His performance in Rocky and Cop Land are two other examples where he has surprised.