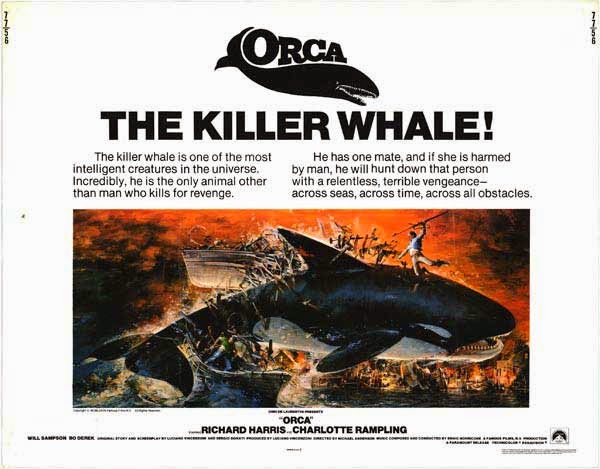 Released two years following the phenomenal box office hit JAWS, this film was undeniably inspired by that success. In fact, according to movie lore, it was set into motion almost immediately after JAWS hit the theaters when executive producer Dino de Laurentiis called his co-producer Luciano Vincenzoni and ordered him to "find a fish that is tougher and more terrible than the great white!"
From that, the film that was to become ORCA was born. It probably shouldn't have come as any surprise, then, that when the movie got released, it was immediately panned by both critics and audiences alike as a JAWS rip-off. Subsequently, it did lousy at the box office.
Only part of that was deserved. Strictly from the standpoint of let's-jump-aboard-a-popular-concept-and-make-some-money-with-our-own-killer-fish- movie, it surely was, as already acknowledged, inspired by JAWS. Beyond that, however, ORCA has its own story to tell and in many ways stands as its own movie. Heck, you could even make the case that it owes as much to MOBY DICK as to JAWS. In a role-reversal sort of way, instead of the human Ahab obsessed with hunting down and dispatching Moby Dick, here you have a vengeful killer whale obsessed with singling out and dispatching the fishing captain who killed the whale's mate.
That's the central theme of ORCA: A shark-hunting sea captain (played by Richard Harris) decides to switch tactics and try instead for a killer whale. In the attempt, his harpoon misses the bull whale (except for slicing a tell-tale notch in its dorsal fin, the sight of which will become a forboding occurrence throughout the rest of the film) and instead hits the bull's mate. As the wounded cow is being winched aboard Harris's ship, she gives premature birth to a calf. Both mother and infant die. Watching from nearby waters—and focused primarily on Harris, who fired the deadly harpoon—is the bull. We have been told earlier, in a presentation by Charlotte Rampling, playing a scientist specializing in killer whales, that the creatures are highly intelligent, they mate for life, and are known to possess a human-like capacity for seeking revenge against anyone or anything who have done them harm. 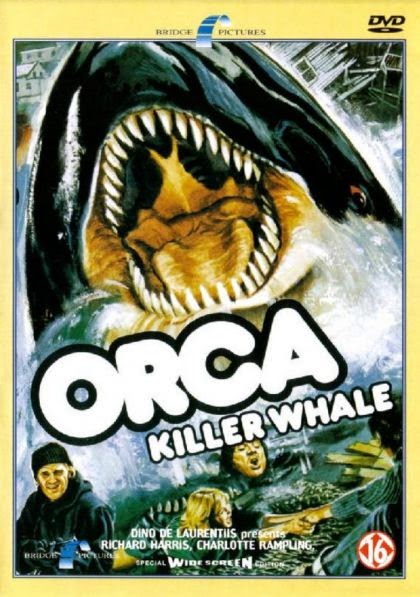 So there's the rest of the set-up. When Harris docks his ship for repairs in the harbor of a small fishing village, the vengeful bull killer whale follows. First, to the great concern of the local fishermen, all the fish in surrounding waters flee. Then boats—all but Harris's—start being damaged. Then various buildings and businesses on piling all along the harbor are wrecked and damaged, including a huge fire that breaks out when a gas line breaks and is ignited by a fallen lantern. The house Harris is renting is knocked off its pilings and his sister, sliding partially into the water during the chaos, has her leg chomped off by the attacking whale … Yet Harris's boat remains untouched. The message is clear: The whale wants Harris to face him out on the open sea. The fishermen of the village want the same thing—or, at least, they want Harris gone from their village and want him to take his vengeful stalker with him.
Aided by the only remaining member of his original crew, the scientist (Rampling, who is inexplicably drawn romantically to him), and a somewhat mystical Indian (Will Sampson) who knows whale lore and volunteers for this epic battle, the captain sets out to sea to meet the challenge put before him. The whale leads, Harris and crew follows … all the way up to the ice packs of the northern seas where the climax and ultimate final confrontation takes place.
There are many moments in the first two thirds of the film that strain credibility. But they are done with enough energy and excitement to carry them off pretty well. The final third bogs down and plays out so slowly that illogical factors pile up and almost sink the whole show (no pun intended). Whatever the film suffered in the way of negative reviews, etc., is, in my opinion, earned here more so than from any of the rip-off accusations. Nevertheless, according to Wikipedia, in recent years ORCA has earned a cult following of sorts in the natural horror subgenre (whatever the hell that is).

On the plus side, by anybody's standards, the film has top notch production values throughout. The score, the cinematography, the direction (by old pro Michael Anderson) are solid. Same for the acting, for which not a great deal of range is required. Richard Harris's tough, knocked-around Irish mug is perfect for the captain who is pushed to the point of declaring: "I'm coming for you, you vengeful sonofabitch!" And Charlotte Rampling's ever-sultry presence manages to steam up the screen even though she is not called upon to do much more than spout scientific facts and alternately discourage and then encourage Harris as far as what he has to do.
I wish they'd taken time to strengthen the ending. Still, I came away with the feeling that the makers of ORCA (despite the harried middle-of-the-night phone call that launched it) tried hard to do something bigger and better than just copycatting a previous mega-hit. And they scored in a number of areas.
Worth your time if you can catch it on cable or purchase it out of a DVD bargain bin.
Recommended, with reservations.
Posted by wayne d. dundee at 9:23 PM

Did you happen to see my piece Oct. 3 at Amazing Stories? Great minds think alike!

I like Harris but remembering disliking this film in the day. And not sure I'll take another look now. Now what about THE DEEP with Jacqueline Bisset? Its been awhile since I've seen that one as well. But because of Bisset, well, no brainer there.