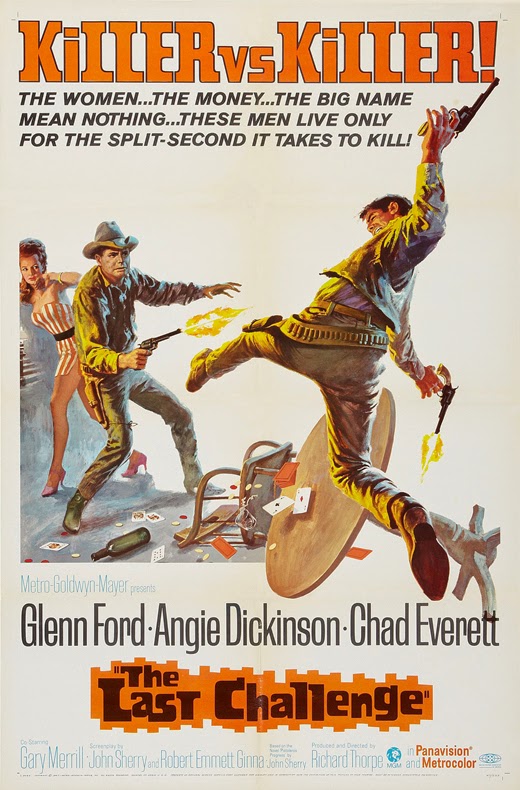 This 1967 film from MGM is a largely predictable Western drama with a slightly more adult edge to it, but otherwise not too different from some of the Western series still playing on TV at the time it was released. Nevertheless (with apologies to Aesop), since familiarity often breeds content rather than contempt (which may well be the battle cry of the Western's durability), it remains a solid entry in the genre. In the sure hands of established pros like Glenn Ford and Angie Dickinson --- backed by a supporting cast that included many other pros such as Jack Elam, Gary Merrill, Royal Dano, Robert Horton, Frank McGrath, etc., all directed by Richard Thorpe --- it could hardly be anything less.

The plot is a slight variation on the oft-used "weary older gunfighter trying to avoid ongoing confrontations with cocky younger gunnies looking to make a reputation" theme. In this case, the older gunman is a town marshal (Ford) trying to live down his past reputation by keeping the peace in a quiet little town; yet he still doesn't hesitate to use his gun if/when necessary and when he shoots (as is shown in the movie's opening scene) it is to kill. Enter the younger gunslinger (Chad Everett, in a change-of-pace role) out to prove he's the fastest gun around and unwilling to settle for anything less. "If a man is second best, he might as well be dead," he says at one point.
Due to a chance meeting at Ford's favorite fishing hole, as Everett happens by on his way into town, the two men at first seem to like each other as they share some fish and conversation --- until Everett (not knowing who Ford is) reveals his goal for coming to the area. Overall tension builds from there as Everett proceeds on into town, making it clear he still intends to go through with what brought him there; and Ford, wanting to avoid a showdown with the likable young man if at all possible, nevertheless vows that he will kill him if given no other choice. Angie Dickinson, playing Ford's romantic interest who owns/operates the local saloon and brothel, has great concern for Ford's safety if the gunfight takes place. To prevent it, she tries everything from simple persuasion, to a buy-off of Everett's character, to hiring a desperate ex con (Jack Elam) to kill him from ambush.
In spite of everything, the shootout between the two men occurs. Rather than tell you the result, I will resort to that annoying old grade school practice when giving a book report of saying only: "If you want to know what happens, you'll have to (in this case) see the movie for yourself."
Nothing ground-breaking or spectacular, as I said at the start, just basic, often stereotypical stuff --- but very well done.

A couple of background notes you might find interesting: 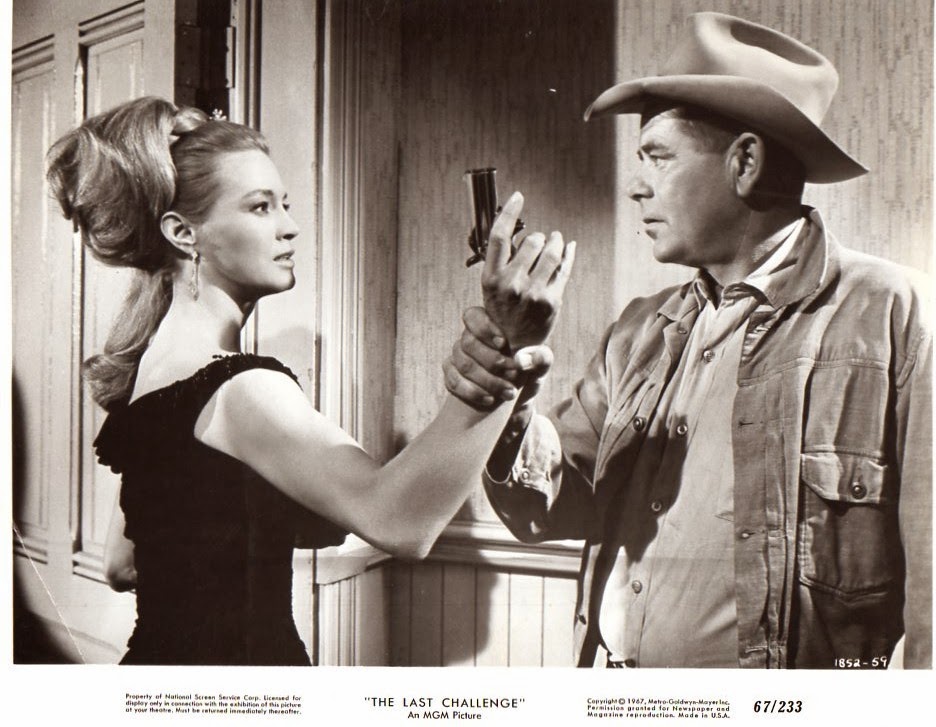 Glenn Ford also had a long career (over five decades, including time out for military service – awarded several medals and ultimately reaching the rank of Naval captain – in WWII and Vietnam) playing a wide variety of roles. Particularly later in his career, he did a lot of Westerns (on TV, as well as movies) and it suited him well.
As for Angie Dickinson … well, it's Angie Dickinson, man. In this movie she plays a saloon/brothel owner, does a competent job and looks damn good doing it. What more do you need?

As I said at the start, THE LAST CHALLENGE is good, solid Western entertainment. Nothing more, nothing less. If that's what in the mood for, you could do a whole lot worse.
Posted by wayne d. dundee at 7:37 PM

I like this one. Yeah, it's got Angie in it, so what's not to like? And I love most of Glenn Ford's westerns. He was just the right age to make them, too, and he brought a wordl-weariness coupled with old-style toughness that is very appealing.

Great review, Wayne. Makes me want to watch it again. It's been a few years.