Noteworthy Reads: GANGSTERS, HARLOTS, & THIEVES - DOWN AND OUT AT THE HOTEL CLIFTON by Theron Moore 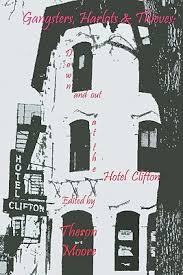 This is a fascinating, insightful biography that succeeds on many levels.
First and foremost, it is a loving tribute to author/poet Todd Moore by his son Theron. Secondly, it is a deeply introspective study of Todd's work (and an introduction to same, with several fine examples, to anyone previously unfamiliar). But, ultimately, it is also a biography of Earl Moore—Todd's father, Theron's grandfather (whom he never met).
Theron's own stated intent with this book is for it to serve as a snapshot of the Todd family's life during the down-and-out years (1947 – 1961) they lived in the Clifton Hotel, a sad, once-elegant dive populated by railroad laborers, drifters, con artists, derelicts, hookers, and a few flat-out outlaws
… People down on their luck, many of them never to rise back up.
It was this setting, combined with the colorful stories told by his father, that planted the seed in Todd to one day become a co-founder of what has grown to be called the "outlaw poetry" movement. (Todd also wrote some fine, lean prose fiction as well as several highly-regarded essays.)
Earl Moore's failure at his own ongoing attempts to write a novel or screenplay was eventually what drove him to the drink and depression that brought the family to the Clifton after Earl lost his job with the railroad due to drinking on the job. Earl could mesmerize listeners with the entertaining stories he liked to tell. But he never could seem to capture that magic on paper, at least not to his satisfaction.

One of the strongest scenes in the book relates how Todd once watched his father destroy a manuscript hedd been working on and refining for a long time, tearing page after page from its binder and feeding them one by one into the flames of the burn barrel out behind the Clifton. One can almost feel the resolve this must have forged in Todd, the steel underpinnings that helped him persevere and one day succeed with his own writing.
Although I don't recall ever hearing about the Clinton Hotel or his father from him, I formed a fairly close friendship with Todd Moore in the mid 1980s/early 90s, when we both lived in northern Illinois. We often traded manuscripts and critiqued each other's work. I saw the beginning stages of the outlaw poetry movement and read many of the early segments that eventually would form his epic DILLINGER. I marveled at the power of his poetry back then. Even more so since.
This book by Theron does a great job of capturing—and adding to—the depth of that power.
Highly recommended.

The foregoing is the Amazon review I wrote for this book a day or two ago. In addition, for the sake of this blog entry, I want to include a couple examples of the type of poetry my old friend Todd wrote. Just using the term "outlaw poetry" doesn't really cover it or convey its impact.
We'll start with this quickie:
i like a
poem
hard
like
a bullet
Then a bit longer example:
The way
i write
is strictly
fuck you
no cap
ital letters
no punc
tuation
the words
jammed
together
or all
smashed
up like bro
ken glass
crushed
pop cans
& used
condoms
the ameri
can sen
tence is
either a
stutter
or a
scream
& i'm
waiting
to watch
That's outlaw poetry.
That was Todd.
Posted by wayne d. dundee at 6:44 AM

Sounds like a helluva book, Wayne. And both examples sold me.

Exactly the kind of human story that small press and ebooks have saved while big publishing puts out another weak imitation of something else. Thanks for highlighting this!

David and Richard -- thks for the kind comments. Also to Wayne, thks for the great review man, i really appreciate it.

This is Theron Moore, I'm the editor for "Gangsters, Harlots & Thieves..." RE: the book, I had a great time doing it, that book means a lot to me AND it's a true story as well.

I'm currently writing a book on the history of the small press movement of the 70's and 80's which hopefully will be done by summer, then i'll take a short break and begin tackling 2 more mid sized books of my father's writing, then i'll tackle "Dillinger" the book that really became the focus of my father's work over his 40 year writing carrer, give or take.

The book will most likely be divided up into multiple volumes because page wise it's right around 5000-6000 pages total, yeah it's huge.

I'm also co-writing a book with a friend of mine about a serial killer, and i'm almost done with a sci-fi / fantasy / apocalyptic novel that i'll soon be shopping around to agents / publishers.

For anyone interested, i do have copies of my father's books & chapbooks for sale. I'm currently compiling a list of what's available so if yr interested send me an email.