PULP WRITER ... AND PROUD OF IT

In the past couple years—largely in conjunction with the surge in e-publishing and the growth of blogs, Tweets, and so forth—a number of "old school" terms for popular fiction seem to have come back into vogue.

"Noir" gets freely—too freely, in my humble opinion (or IMO, just to show I'm "with it" as far as current vernacular)—applied to just about anything and everything. I'm expecting the noir line of Archie Comics any day now …

On a happier note, "hardboiled" seems to rightfully be getting recognized as a style that can be found in a much wider range of genres and/or sub-genres than just detective mysteries.

For the most part, the umbrella under which all of this gathers is good old-fashioned pulp fiction—another term back in prominence.
I've known for some time that I was a writer of hardboiled fiction. It's all I ever wanted to be. I cut my writing teeth on hardboiled PI fiction with my signature Joe Hannibal character. Hardboiled Magazine—the small press publication I started way back in 1985, and is continuing yet today under the guidance of Gary Lovisi—pretty much made the statement on where I stood and what my goals were. The Western fiction I've more recently branched into also has an undeniable hardboiled edge to it, as does the handful of other things I've written—including last year's NIGHT SPOOR, a hit man vs. vampire novel that I consider hardboiled horror. 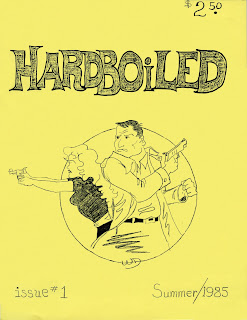 But, for all that, I somehow never thought of myself as a pulp writer. Not that I considered myself above being categorized that way, and sure as hell not because I ever considered the words I put on paper to be great lit-ra-cha in any sense.
What it was, I've decided upon retrospect, is that I figured I was born too late and had missed the boat on being a pulp writer. After all, everybody knows the "golden age" of pulp was the 1930s and '40s. Ancient as I am, I don't go back quite that far.
Hell, I even came in on the tail end of the paperback boom of the 1950s thru the '80s. My first novel came out in 1988 and was in hardback. Fantastic as that was (and here's a little insight into how that quirky little mass I call a brain operates), it wasn't nearly as thrilling as when that same title was re-issued in paperback a couple years later, followed by my first paperback original! Now we were cooking. And then I was able to really feel complete as a writer when I finally spotted one of my titles on the rack at a used book store (see, I told you my thought process is a little quirky).

Anyway, I still never had thoughts of calling myself a pulp writer until fairly recently.
There should have been some hints as far back as '85 when I did Hardboiled—what the hell was that if not a modern-day pulp magazine? I even did the covers on yellow paper so it would look similar to old, yellowed pulp pages.
And on the Joe Hannibal listing at Kevin Burton Smith's terrific Thrilling Detective web site (www.thrillingdetective.com), Mr. Smith wrote some time back that the Hannibal stories and novels were "recommended for those of you who aren't getting enough pulp in your diet"; he went on to call me, thanks to Hardboiled, "a kind of spiritual leader to what I like to call 'The New Pulp'." And in a 2005 response to the site, I myself wrote: "I aim never to lose my pulp roots, and my inclination toward hardboiled is etched pretty firmly … "
Finally, in 2010 and '11, after I'd done a couple stories for David Cranmer's excellent  Beat To A Pulp web magazine (http://www.beattoapulp.com/) and started getting involved in blogs, Twitter, Facebook, etc., I started to get a sense of how an even newer pulp era was starting to catch on in the world of e-publications and participating readers/writers. 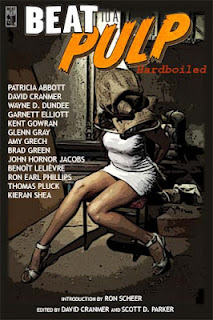 What ultimately drove the point home for me came after I'd written COUNTERPUNCH, a novel in the popular Fight Card series created by Paul Bishop and Mel Odom. My friend (full disclosure) Lynn F. Myers Jr. wrote a review of the book in which he stated: "COUNTERPUNCH is pulp, yes pulp, and it is very good … Dundee would have been very popular as a writer for Black Mask or Dime Detective in the olden days." 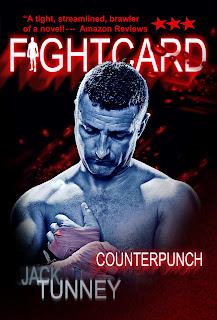 It was one of those smack-yourself-in-the-forehead moments.
Lynn was exactly right. COUNTERPUNCH was, intentionally, a pulp novel. So were (albeit less consciously) all of my Joe Hannibal stories and books, my Westerns, and everything else I'd ever written … I was a goddamn pulp writer!

Yeah, maybe I'd missed the "golden age" of pulps … and then I fell between the cracks of the paperback boom … but now, in a new century, in my sixties, retired from a full-time job in the real world and thereby writing more prolifically than I'd ever been able to before … I'm doing what I always felt I was born for.
I am a genre pulp writer.
And you know what? I am damned proud of it.

Well said, Wayne! Everyone writes "noir" these days (except most don't)... I prefer hardboiled. I cut my teeth on Hammett and his take on the world still colors my writing.
I love pulp, and it never really disappeared. Paperback originals, the adventure series, thrillers... they all flow from it.

Thanks, guys.
You're right, Thomas, pulp never really disappeared ... the association just lost its footing on the slippery slope that passes for my brain.

I enjoyed reading your blog post, Wanye. Good stuff. Thanks.