My Nebraska: THE TOADSTOOL BADLANDS

Tucked up in the northwest corner of the state, largely unheralded, often unheard of, even by residents as nearby as the Sandhills or even on the hinge of the panhandle, lies one of Nebraska's most distinct land features.

Located within the confines of the rolling Oglala National Grassland and not too far off the flank of the better known Pine Ridge region that runs off to the east, near the northern boundary of the state, the Toadstool Badlands present a stark, beautifully eerie landscape of bleached-white, clay-based rock formations that could have been sliced off and transplanted from the moon. 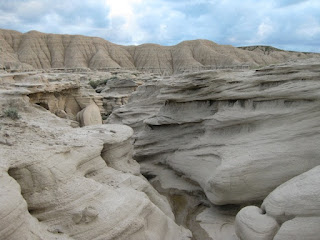 Covering only a couple square miles, the Toadstools pale in spectacle to the more famous South Dakota Badlands. Yet the sometimes grotesque, ever-eroding, ever-changing rock formations to be found here—among them, many that are blunted and rounded-off at the tops like mushrooms, hence providing the name bestowed by early travelers to the area—create a unique and memorable visual beauty all their own. 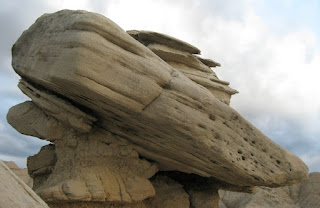 Once covered over by a wide, shallow river, the badlands were a depository for volcanic sediment and a watering/grazing area for various prehistoric animals such as small horses, camels, huge land tortoises, gigantic pigs, and even a type of rhinoceros—all leaving behind a fantastic fossil record that causes the region to be known yet today as part of a rich Fossil Highway. 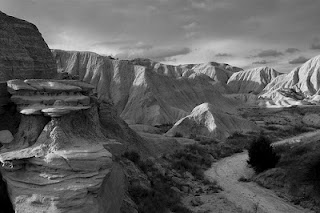 The Toadstool Badlands today are maintained by the National Forest Service and are referred to as Toadstool Geological Park. The park is open 24-hrs a day all year round. It is accessible via a remote, rugged, unpaved road. Upon arriving at the grounds, there is a small visitor parking/picnicking/camping area. Beyond that, lay the twisting trails leading up through the heart of the rugged, stark beauty.
I have been to the Toadstools many times. Thanks to my rickety old bone-on-bone knees, gone are the days when I can hike back through the heart of it. But I still make it out there almost every year, at least once. I never get tired of just drinking in the raw beauty of "Nebraska's badlands".

In fact, the place has so intrigued and inspired me that I've used it twice as the setting for two different works of fiction. First there was a Joe Hannibal short story (make that a long short story, inasmuch as it came in at about 10,000 words) titled "Bad Day In The Badlands", which appeared in the December 2010 edition of Rick Helms's fine but unfortunately now-defunct eZine, Back Alley).
More recently, the Toadstools also play a prominent part in my just-released Lone McGantry western, Reckoning At Rainrock.
In the latter, I may have embellished the layout a wee bit (dramatic license, don't you know) … But for the most part, in both cases, I treated the area with all the respect it is due and tried my best to capture some sense of its distinct grandeur.

I have tried to do likewise with this post.
So if you're ever out Nebraska-way—you know, that flat, brown, boring place that most people dismiss as they watch it sliding by their side windows while cruising through on I-80—take a jog off the beaten path and see what else Nebraska has to offer … and the Toadstools sure wouldn't be a bad place to start.

Thanks for the great essay on the Toodstool Badlands. I've been to the Grasslands, Crawford, and Ft. Robinson, but ran out of time for the Badlands, a place I've long hoped to get back to. Looks like it will be on the printed page (yours) before it will be in person.

Same sentiments here, Wayne. A fine piece on a little known locale. Hey! I dig the "My Nebraska" concept.

I had a hunch I could count on hearing from my fellow Nebraska appreciators ... Thanks for the comments, guys. The Toadstools are a fascinating place and, after writing this piece, I am itching to take another trip out there soon.