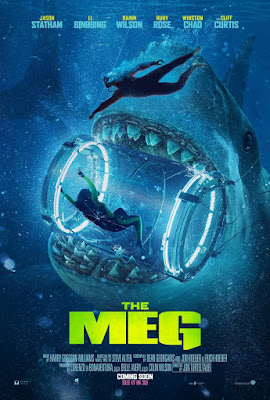 An increasingly popular way for reviewers to critique movies these days, especially those aimed at being big summer blockbusters, is to concentrate first on whether the film is going to “earn out” as well as expected against their budgets (often outrageously high due to more and more dependency on CGI special effects). After that comes an examination of the movie itself -- how good it is, how close it came to doing what it set out to do, how entertaining it is or isn't. (And if the money-making potential isn't there, then the reviews tend to be more negative [though such an admission/claim is never openly made]).
Seems like a sort of ass-backwards approach to me. I say, review the damn movie and let the box office do what it may – and not be adversely affected by poor reviews (or vice versa).
Okay, that little rant aside, let me get to THE MEG – which I enjoyed the heck out of, no matter what its budget (though I suspect it was pretty hefty due to the special effects). The latter did not overwhelm the film, however. They were necessary to the story and they were well done. Period. But at the core of the story, amidst all the undersea and on-the-sea action involved in fighting the giant prehistoric terror from the deep, there are people relating to one another in various and interesting ways. There is humor, lots of it stemming from the kind of banter that happens within a group of people who work together and face stress together, there is a bit of romance, some guilt and blame passed back and forth, some heroics and betrayal ... and all the while there is the menace of the megaladon shark, risen from the depths and angry and hungry as hell. 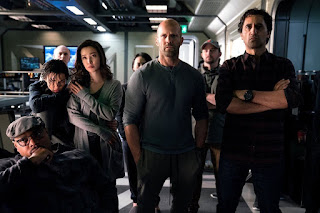 Jason Statham turns in another solid job as a slightly flawed action hero, and even gets a chance to flex his acting chops a bit. (Calm down, I said “a bit” - I'm not calling him the next deNiro [as if anybody'd want to be anymore] or Olivier or anything like that.) A Chinese actress named Li Bingbing at first comes across as merely a pretty scientist type (like we saw dozens of back in all those 1950s horror/sci-fi flicks) but then progresses to become a very appealing female lead, in contrast to other more flamboyant actresses in the cast. The rest of the cast in general is quite good, including a little 8-yr-old charmer named Shuya Cai, as Li Bingbing's daughter, who steals every scene she's in (and whose presence in the film's storyline is fine and natural, as opposed to “the little girl in peril” stupidly injected into the most recent, highly disappointing JURASSIC WORLD entry).
All in all, if you're looking for a well done, balls-out, high-energy summer popcorn flick, THE MEG – in my humble opinion – delivers the goods.
Strongly recommended.

Been wondering about this one. I don't watch scary/horror movies, but this one looked more action oriented in the previews. Then there is the whole Jason angle as I am a big fan of his.

Gotta wait for the DVD deal so I have plenty of time to figure it out.

And, yes, I agree with how you see movie reviews these days. Not exactly sure when that way of doing it began, but it is garabage.

I think you'll find this worth the wait.
I'm with you, I don't much care for straight so-called horror movies (sometimes with sci-fi overtones) where it's basically a string of people getting killed. However, if there's some kind of protagonist or team (such as the case with MEG -- or earlier entries like the original PREDATOR or ALIENS)fighting back, then I'm on board. Sounds like we also share being Jason Statham fans. He just keeps getting better, and takes another big step with this one.
Thanks for commenting.

You've convinced me, Wayne. Sounds right up my alley. I love horror, even when it's just a string of wretched but hopefully good-lookin' albeit deserving humans getting slaughtered, so I'll see this one too. Right after I take in MI 4. I haven't seen a single movie in the theater this summer, but it's just hot enough now I'm ready to go cool caving and popcorn munching.

You won't be sorry with THE MEG, Pete.
I've fallen behind on the MISSION IMPOSSIBLE series but, from everything I hear, this current one is right up there near the top.
So you'd be picking two good ones to escape the heat with.

Yes, I also want to see MI 4. Everything I have heard about it has been very positive.

Thanks for the heads up, Wayne. My wife and I are fans of Statham, too. We also enjoyed Dwayne Johnson's SCYSCRAPER. We tend to read reviews and then on the whole ignore them; they're subjective and doubtless the reviewers have their psychological baggage like everyone else. BTW, Peter, the latest MI is #6... and is definitely worth seeing.