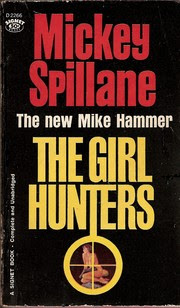 For me, this is where it all started.
This book, more than anything else, is what set me firmly on the path to not only one day becoming a writer myself but also falling in love with the hardboiled framework within which I would do my writing.
Oh, I had “tinkered” with thoughts of writing and storytelling all through grade school—initially blocking out pages of paper, comic book-style, and filling the blocks with drawings and conversation balloons to tell a story; until eventually deciding I was more interested in (and better at) the writing than the drawing. And as far back as I can remember I was an avid reader—comic books, youth adventures and mysteries, young adult, Whitman editions of classics and TV show tie-ins, etc.
Then along came Spillane.
I bought my copy of THE GIRL HUNTERS off the spinner rack of a drug store in Antioch, Illinois. I recognized the names of Spillane and Hammer because of the old Darren McGavin TV series. I remembered liking that show when it was on, but I was soon to find out it did little to prepare me for the real thing. “The first Mike Hammer in 10 years!” read the back cover blurb of the book; and then, “Only Mickey Spillane can write them as rough, raw, and violent!” I couldn't plunk down my 50 cents down fast enough, and it was possibly the best investment I ever made.
In fairness, I should mention that, in this same time period, Ace paperbacks had begun re-releasing the Tarzan novels (and other works by Edgar Rice Burroughs) with those wonderful Frank Frazetta covers. These, too, factored strongly into inspiring the writer in me. The thrill and enjoyment I got from reading these works by Spillane and Burroughs (and other writers they subsequently led me to) was something I not only wanted more of but it became a goal to one day produce work of my own that would hopefully provide that same kind of enjoyment for others. And if you're thinking what a strange combination Spillane and Burroughs make, well, I can't help it—that's the way it was.
Spillane ultimately won out as far as the direction my own writing would take (though there's still a part of me that hankers to one day do something in the fantasy/high adventure mold). I think this was largely due to my blue collar background and a peripheral family influence. My folks were pretty basic, hard working, middle class types (as I consider myself, and proudly so) who didn't exactly dis-courage my writing aspirations, but neither were they enthused about it as I grew toward manhood. Telling them I was going to be writing detective mysteries or maybe Westerns was one thing; had it been forgotten realms and tales of derring do, hard to tell what their reaction might have been.

Getting back to THE GIRL HUNTERS. This remains my favorite Spillane book (though I tend often to think of it in conjunction with THE SNAKE, which makes a very powerful second act if for no other reason than the terrific ending). When it comes to a series of books or movies, it is sometimes hard, for me anyway, to make a distinction between favorite and best. No less a Spillane expert (not to mention colleague and collaborator in continuing the Hammer series) than Max Allan Collins considers the seven earlier Hammer books to be Spillane/Hammer at their best. Me, I consider three of the titles that came after Mickey's ten-year hiatus – from1952 to 1962 – to be his best. THE GIRL HUNTERS, THE SNAKE, and THE BODY LOVERS. But, like I said, that's where I came in and where I was first bowled over by the world of Hammer and his creator. My favorites? For sure. The best? Each can judge for him- or herself.
The premise for THE GIRL HUNTERS recognizes Hammer's absence from the scene. In this case, it's only for seven years. Velda, Hammer's beautiful and beloved secretary/partner has been missing for all that time. He sent her out on a case by herself, to guard some jewels being worn by a high society dame at a large function. Velda, the jewels, the high society dame and her husband, all come up missing and presumed dead. Hammer blames himself and goes on the skid, becoming a drunk and a has-been. Until the day a man named Richie Cole, wounded and dying, hanging on just long enough to beg for Hammer to be summoned to his bedside, whispers some startling news to Mike before he checks out. Velda is alive though in great danger – having urged Cole to contact Hammer because he is the only one “terrible enough” to do what is necessary to save her! This is a terrific set-up for everything that follows. Hammer must not only race against the forces looking to kill Velda (a team of high level Soviet assassins, it turns out, seeking to silence her for the secrets she learned after being shanghaied and then spending all this time on the run inside the Soviet bloc), but he must also dodge the cops and feds who want to know what Cole told him, while all the time fighting his own diminished capacities after being shocked out of a seven-year drunk. Along the way he meets a Spillane-special female who he almost falls in love with; he dodges bullets and those seeking to “test” him in order to find out if he's got the old moves; and engages in a brutal fight to the death with one half of The Dragon assassination team before he finally puts the last of the pieces together that will ultimately lead him to Velda.
Damn! Writing about it after all these years and even after re-reading it once again before sitting down to do this piece, the power of it still hits as hard as ever. 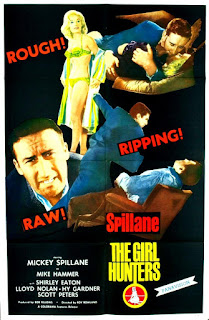 Two final notes about THE GIRL HUNTERS:
By this point, I trust I have impressed upon you that THE GIRL HUNTERS was/is a very important book to me.
If, for some ungodly reason, you have never read Spillane or never read this particular title, I urge you to seek it out and do so. You won't be sorry.

You made me want to read it again, Wayne, so dammit that's what I'm going to do!

I'd be interested in hearing your take on THE LAST STAND.

A friend recently gifted me a collected edition of Hammer tales, including The Snake. You've inspired me to move it up on the reading list.

A fine piece of writing, Wayne. My introduction to Mickey came at about the same time as yours, in the same fashion and with the same book. Thanks for sharing.

I'll be getting to THE LAST STAND pretty soon, Pete. I'm anxious to do so. I'll let you know.

Spillane was famous for his hard-hitting endings, John. The most famous is probably in his first book, I, THE JURY, where he gets his revenge on Charlotte for killing his best friend. When he shoots her in the stomach, like she did Jack, she asks in disbelief, "How c-could you?" And Spillane writes "I had only a second before I was talking to a corpse but I got it in -- 'It was easy.'" I'm writing this from memory, without going across the room and checking the book, but I think I got it close to verbatim. That's pretty strong, especially for its time, but his endings for THE SNAKE and a couple years later THE BODY LOVERS are even wilder. I won't spoil 'em, but you'll see.

Great minds run along similiar paths, Steve. Thanks for commenting.