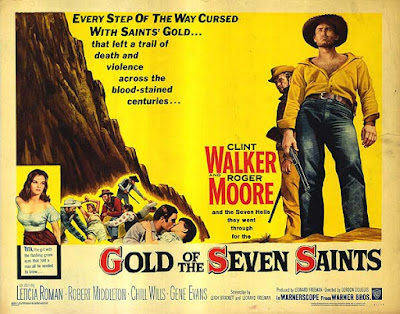 This 1961 Western from Warner Brothers has all the elements for a top notch Western adventure—strong cast, veteran writers, good production values, and some beautiful outdoor scenery shot in and around Arches National Park in Utah. Unfortunately, it suffers from some slow pacing and a couple prolonged shootouts that amount to little more than two groups of guys blazing away at one another from behind rocks. It's hard to make a shootout un-exciting, but this film almost manages it.
The two main characters, Jim Rainbolt and Sean Garrett, are played respectively by Clint Walker and a painfully young-looking Roger Moore (long before James Bond, in his Warner Brothers contract days when he played the English cousin Beau on Maverick and co-starred in the short-lived Alaskans series). The banter and chemistry between these two make for some of the best moments in the film. Rainbolt and Garrett are a pair of trappers who inadvertently have made a gold strike. They are on their way to cash in their new wealth at a place called Seven Saints when Rainbolt's horse pulls up lame. (Seven Saints as advertised in the title, by the way, is a bit misleading—it's not the gold of seven saints, which makes it sound rather Raiders of the Lost Ark-ish, but rather a destination [one they never even quite reach].) Anyway, in going into a nearby small town to get his partner a re-mount, Garrett foolishly flashes some of the gold to buy a horse. This is noticed by big, burly Gene Evans playing a nasty character named McCracken who promptly gathers up a gang of bad guys to follow Garrett with intentions of finding out how much more gold there is and relieving him of it. This sets up a long series of the bad guys following Rainbolt and Garrett through vast stretches of beautifully rugged country. The pair can't quite escape, the bad guys can't quite manage to catch up and pin them down.
Chill Wills shows up as a crusty, drunken old doctor (was there any other kind in the Old West?) who helps the good guys out of a tight spot and then treats Garrett's wound. When asked how a doctor knows how to shoot so good, he explains “I learned how to shoot long before I learned about doctoring”. Eventually, the now-trio reaches the hacienda of Gondora (played with scenery-chewing delight by Robert Middleton), an old pal of Rainbolt's and now part-time bandit living high off his ill-gotten gains. He agrees to help protect his old friend for a portion of the gold (which by this point Rainbolt and Garrett have hidden out in the desert as a potential bargaining chip should they be captured by the baddies).
An interlude at the Gondora hacienda involves some scenes with saucy, sexy Leticia Roman playing Tita, a “ward” of Gondora who is willingly for sale to any man with the right price. This is all treated as light-hearted fun that would drive many people nuts in these PC-conscious times. There is also a scene where Doc Chill Wills helps the wife of one of Gondora's men having difficulty giving birth to her baby. The doc requests a quill and a box of snuff to aid him and then, off camera, we here the mother give a loud sneeze followed shortly by the wailing of a newborn. Doc calls it a “quill baby” .. I got the snuff part figured out, but how the quill figured in I will leave to your imagination. 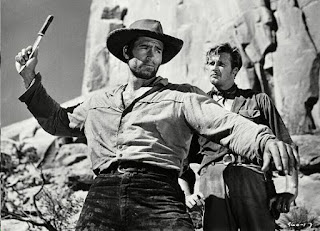 In the end, through diversion, McCracken kidnaps the wounded Garrett and uses him to force Rainbolt to tell where the gold is hidden. Rainbolt tricks the gang leader at the last minute, and pins him under a boulder which had previously been covering the gold. There is a powerful scene here where Rainbolt shows every intent of leaving the injured, pinned McCracken to die in spite of his pleas for mercy. He flings a handful of gold dust at him and snarls, “Here—die rich!” A few more gritty scenes like this could have lifted this movie a lot.
Gondora and his riders show up at the last minute to kill McCracken and, not surprisingly, demand all of the gold for their trouble. Another chase ensues, this time with Rainbolt and Garrett fleeing a new bunch of bad guys. Spoiler Alert: The big climax involves our boys trying to escape by crossing a swollen, rushing river. They make good their escape but, in the process, the gold dust is washed away—back into the river where it came from—and nobody gets rich off it. From opposite sides of the river, Rainbolt and Gondora declare they will be friends once more should they ever meet again in the future. Then, left on their own, Rainbolt and Garrett decide they will go back to trapping ... it's a lot less dangerous and troublesome than gold.
This movie is based on DESERT GUNS, a novel by Steve Frazee that I never read so I don't know how it compares. Leigh Brackett, notable for much stronger stuff, co-wrote the screenplay. Direction was by veteran Gordon Douglas who did everything from Little Rascal comedies to a blaxploitation movie near the end of his career, with outings featuring the likes of Jimmy Cagney, Sinatra, and Elvis in between. He also prviously helmed FORT DOBBS and YELLOWSTONE KELLY (a far superior Western) with Walker.
In the final analysis, I found this a watchable, mildly entertaining movie. Largely because I like Clint Walker a lot and, as noted before, the banter between him and Moore is enjloyable. But, somehow, I found myself thinking throughout that it just could have been a lot better.
Posted by wayne d. dundee at 8:13 AM

Excellent post, Wayne. I agree with your summing up of the movie. It looks great but is fatally low on action (which is curious, as Gordon Douglas westerns usually had good action scenes at least.) For me the hardest aspect to endure, I'm afraid, is Roger Moore's Irish accent.

I watched this, too, Wayne, and agree with your assessment. Mildly entertaining, mostly because of Walker's great presence, but overall way too slow. The beginning after Moore stole the horse really dragged. Spectacular photography, though!