Another Look: THE MAN FROM THE ALAMO (starring Glenn Ford, 1953) 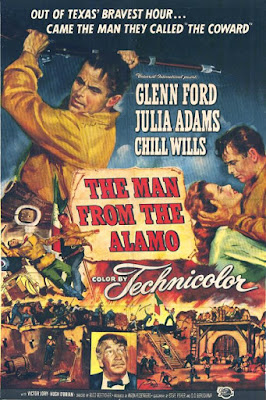 This is an interesting Western drama from director Budd Boetticher, who a few years later would direct a string of Randolph Scott Westerns that are considered minor classics of the genre.
In and of itself, THE MAN FROM THE ALAMO is also a noteworthy oater. Its execution perhaps does not match its ambitions, but it nevertheless is solid entertainment with some different twists.

Glenn Ford (always easy to watch) plays protagonist John Stroud, who, as the title suggests, is a man who fled the battle of the Alamo before it fell under the superior forces of Santa Ana. His reasons for leaving, however, have nothing to do with cowardice. In fact, in an early scene where the Mexican army's bombardment of the mission fort results in its flag pole being blown off the wall, Stroud risks danger from further blasts by climbing up and re-posting the flag while the bombardment continues. Shortly after this, however, we learn that Stroud is one of about a half dozen volunteer defenders who have property and families not far to the north. Since word is out that Santa Ana is issuing land grants to Texcians who will fight on his side and harass settlers as his army is otherwise occupied, Stroud and his neighbors are worried for the safety of their families while they are away in battle. When a rider makes it through the enemy lines with word that no reinforcements are coming to aid the embattled garrison, he also mentions that raids are taking place up north by a band of Mexican sympathizers who are burning homes and re-claiming land for themselves. Based on this, Stroud and the others hold a secret meeting to try and decide how to fight Santa Ana and keep their families safe at the same time. “One man more or less here ain't gonna make that much difference,” one of them says. “But one man up there might be enough to round up our wives and kids and get them to safety.” They then agree to draw lots to see who will be the one man to try and make it out … Stroud draws the black bean.
When Travis assembles the garrison and gives permission for any man to leave who doesn't want to stay and fight to the death, Stroud takes a horse and rides out with no clear explanation for why he is making the choice. The rider who brought in word that no reinforcements are on the way is also sent back out by Travis, but not before he sees Stroud leave and is left to think him a coward. 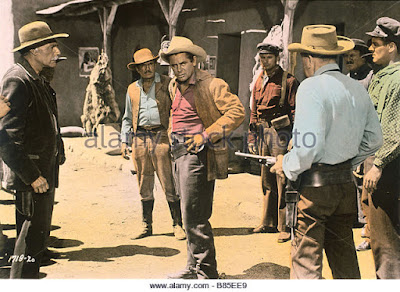 Weeks later, Stroud arrives back home only to find he is too late. His home and those of his friends have all been raided and burned to the ground, his own wife and child murdered. He learns from the lone survivor, the young son of a faithful servant who also killed, that this was the work of a Mexicn sympathizer and gang leader named Jess Wade.
Stroud takes the boy to the nearby town of Franklin where he seeks to leave the orphan with someone who will care for him while Stroud returns to the war. In town, he learns that the Alamo has fallen and he ends up branded a coward and the “man who left the Alamo”. Things go from bad to worse when Stroud is taken into protective custody to save him from a lynch mob. When a Texican army patrol shows up to evacuate the town ahead of the advancing Mexican army, a wagon train is formed and Stroud, still a prisoner, is taken along. Unknown to any of them, the Jess Wade gang takes out after them in order to get the bank money that is traveling on the train. After they've started out, the army patrol is suddenly called away to go fight with Sam Houston in the battle of San Jacinto, leaving the train of mostly women and children to fend for themselves. Stroud steps forward at this point, showing his true bravery and cunning, and leads this unlikely force in a successful fight against the attacking gang. In the process, the truth is finally revealed and accepted of why he left the Alamo. He even ends up with a new sweetheart before he rides off to also join Sam Houston in winning Texas independence.

Like I said, interesting and with some different twists. Also with a sizable dollop of hokiness (like why didn't Stroud or any of his buddies reveal, right from the get-go, his reason for riding away from the Alamo in the first place).
Also noteworthy and curious: In the opening scenes at the Alamo, everybody was firing flintlock rifles and pistols (as it should be). After Stroud got away and showed up in Franklin, he was packing a revolver holstered on his hip—as were the sheriff and other men in town. And the Wade gang members were also packin' revolvers. But then, when the ladies of the wagon train were armed by Stroud to fight off the gang, they were issued flintlocks again. This is a pretty glaring inaccuracy for the time period.

Also of note (to me anyway) is the presence here of actor Chill Wills in a significant role. Seven years later, in John Wayne's big budget version of THE ALAMO, Wills would play another significant role and even get a Best Supporting Actor nomination for it (which he lost, and deserved to—largely due to his overzealous lobbying for the vote). Truth to tell, in THE MAN FROM THE ALAMO he played a better, stronger part.
Hugh O'Brien, Neville Brand, and Julia Adams also turn in good performances. And Victor Jory, as gangleader Jess Wade, is convincingly menacing, but to me he seems oddly out of place in a Western.

Still, quibbles aside, this is a pretty entertaining flick. Well worth 80 minutes of your time if you catch it on the tube or spot it in a DVD bargain bin.
Posted by wayne d. dundee at 6:50 PM

That weapons glitch put a crimp in my enjoyment of this flick, but if you can overcome that it's not bad.