WESTERN ACTION/DRAMA AT ITS FINEST - 2 BY CRIDER 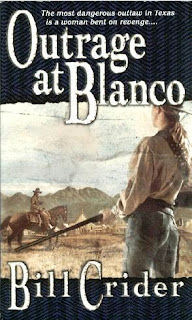 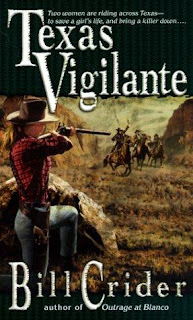 OUTRAGE AT BLANCO has been one of my favorite Westerns ever since I first read it in paperback back in the late nineties. Having re-read it again in its reissued Kindle version, I find it has lost none of its power. And, one hopes, this new release will reach a whole batch of new readers.
It is a revenge story, which is certainly not uncommon to Westerns. The fact that its central protagonist is female gives the revenge plot a certain distinction, but that also has been done plenty of times before. The real bonus here is the depth of characterization, the plot twists, and the tangled motivations of the various players as presented by the skilled hand of author Bill Crider. Ellie Taine --- the aforementioned central protagonist --- is especially well drawn and memorable. So, too, is Jonathan Crossland, a man essentially dying of cancer who is "resurrected" to hit the trail one last time in an effort to try and set some things right regarding his greedy, no-good son.
There's plenty of action in this fast-paced tale, but the revelations and shifting interactions between its characters --- some good, some bad, a couple somewhere in between --- is what will make the most lasting impression on readers.

Until this Kindle re-issue, I had no idea that Bill Crider had written a sequel to his outstanding novel, OUTRAGE AT BLANCO. I'm delighted to have now made the (albeit belated) discovery.
Like OUTRAGE, this is a story of retribution and again Crider's memorable Ellie Traine is called upon to seek her own brand of justice when a pack of savage prison escapees invade her ranch and viciously attacked her foreman and his family.
But they didn't count on Ellie. They left her alive … to come after them. And that is something she not only is hell bent on doing, it is something she has proven to be relentlessly good at.
As noted in a prior review, I'd recommend reading OUTRAGE AT BLANCO and then TEXAS VIGILANTE in sequence. VIGILANTE is a tough, gritty, exciting yarn in its own right, but reading OUTRAGE first gives a more complete appreciation for the full impact of the wonderful Ellie Traine character.
For the bargain Kindle prices, read 'em both --- for some of the finest Western action/drama you're going to find at any price! You won't be sorry.

Great news! I probably read these back when they first came out, too, Wayne. But I lost both copies over the years. Just picked up OUTRAGE and can't wait to reread it. I remember it being wonderfully gnarly and Ellie Traine a wonderfully gnarly main character!

Thanks for reminding me, Wayne. Love this amigos work. Like you, Mr. Crider consistently delivers the good stuff.